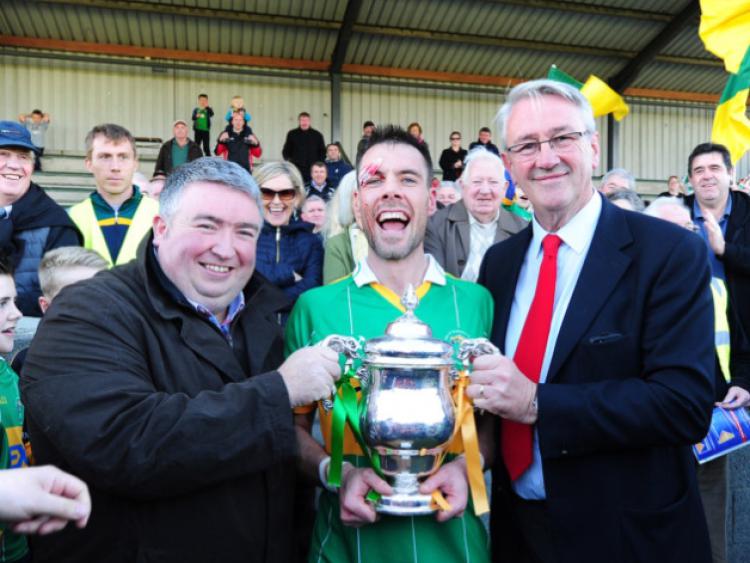 Like a punch-drunk boxer, Pat O’Brien stood, with a blood stained bandage over his right eye and the look of a warrior about him. The last time Sean O’Mahony’s had tasted championship glory his face was a little more fresh faced and less battle-scarred for sure.

Like a punch-drunk boxer, Pat O’Brien stood, with a blood stained bandage over his right eye and the look of a warrior about him. The last time Sean O’Mahony’s had tasted championship glory his face was a little more fresh faced and less battle-scarred for sure.

“It’s a massive boost,” stated O’Brien when questioned about what Sunday’s win meant to the club. “There’s a buzz around the Quay like I’ve never seen. The last time the O’Mahony’s won it I was only 14, so it’s great to have it again,” revealed the O’Mahony’s captain.

He led by example, and not just in the way he threw himself into every dangerous tackle, but in the way he epitomised everything that Sean O’Mahony’s means to the Quay. From a long line of O’Brien’s that have donned the O’Mahony’s shirt, Pat knows what it involves to be part of ‘A Grand Auld Team’.

“It’s a great day. It was a hard game. In the second half we got off to a great start, but the Fechin’s pushed us right until the final whistle. We’re just glad we have the cup back at the Quay.”

He may not be one for many words, but he still took the time to applaud the opposition and the manner in which they put it up to Sean O’Mahony’s on Sunday.

“The Fechin’s are a good team. They were always going to have a good moment and they just kept at us and they never quit. We have to take our hats off to the Fechin’s.”

They love a good scrap, there’s little doubting that. Their championship fairytale has shown that. Seven games in total to claim Seamus Flood - nobody can say they don’t deserve it and few will begrudge them a shot at senior football next year either. O’Brien believes the tougher the challenge the better it is for his side.

“We play really well when it’s tight like that. The tighter the game, the better we are. The matches against the Joes gave us the attitude that we are never going to quit - not until the final whistle - it’s never over.”

While he wouldn’t be one to single out one player for special praise, O’Brien could do little but applaud Man of the Match Conor Finnegan when he was asked about his efforts for the Point Road cause.

“He was brilliant. When the chips were down he delivered,” O’Brien added breathlessly.

This Sunday sees the O’Mahony’s bandwagon set its sights on Westmeath and a Leinster shootout with Caulry. The beat goes on. But O’Brien and many on the Point Road might just squeeze in a celebration or two in he next few days.

“We’re going to celebrate for the next two days anyway and then go back to training at some stage during the week. Our fitness is no problem to us and I think it shows on the pitch.”