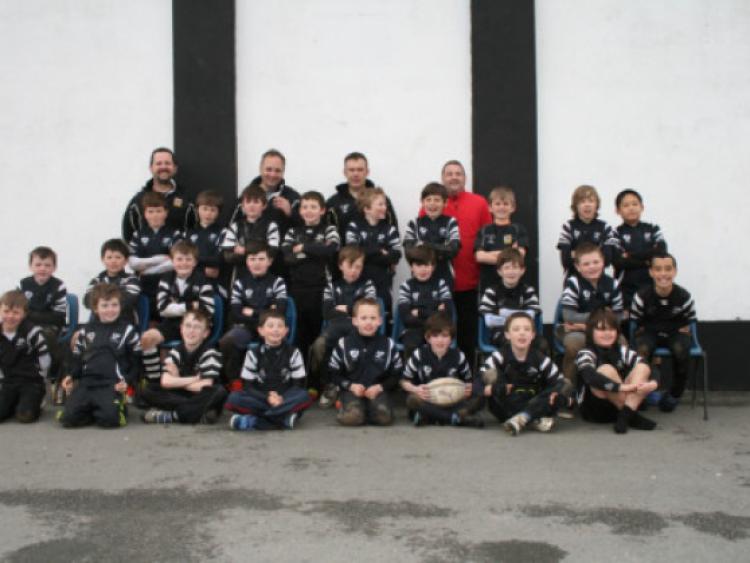 Dundalk RFC U10s travelled west in their final fixture of the season to take on Galwegians RFC in Galway.

Dundalk RFC U10s travelled west in their final fixture of the season to take on Galwegians RFC in Galway.

This talented squad has been together now for four years but this was their first occasion to go on tour.

Team A took on a very determined and very well drilled home side who gave nothing away in the rucks.

After an initial opening period Dundalk RFC got to grips with their physical opponents and opened the scoring with a well working move getting Jake McNamara free on the wing. However, Galwegians came back within seconds to equalize and then shortly afterwards to take the lead.

Like a lot of occasions this year, when faced with adversity these young men have shown their character. Dundalk started to ruck more effectively with offloads coming to the fore. Killian McNally and Adam Duffy worked tirelessly to get forward momentum with their work paying off.

Back-up scrum half Brian Flanagan showed some flair at link play keeping play moving and getting the phases ticking over. Eventually the pressure told and Cormac Malone spotted space out wide and kicked for home to equalise.

Both teams went hammer and tongs for the last few minutes with another 2 tries a piece. With both sides looking effectively ‘shell-shocked’ at the end, the match ended a dry to congratulatory cheers from both sets of parents. It finished 4-4, a credit to their clubs.

Team A had a fantastic second match taking a three tries to one lead going into half time.

Scorers were Ryan McGee who showed his power and mauling technique, effectively dragging four opponents almost 10 meters before twisting over the line to touch down over his head. Another try was scored following a 5m lineout in the corner.

Off the top ball was delivered by Joshua O’Hare for whippit scrum half Daragh Toner to pass crisply to inside centre Jack Mulroy who worked a nicely angled crash ball into the corner to score.

However, Galwegians are a proud side and equalised late in the match to leave the boys with another hard won draw.

Team B like Team A, found the Galwegians squad to be very physical and determined in defence and a very difficulty nut to crack but these players hit the ground running and effectively gave a master class in rucking to their opponents.

Lee O’Carroll was the standout performer with his aggressive low style counter rucking a constant thorn in the side for Galwegians. Another player who rucked like a senior was Fionn Martin who secured ball after the ball at the end of the ruck to make life easy on his scrum half James Toal who gave his opponents a torrid time with his darting runs around the edge of rucks or going wide to get his backs going.

Elijah Faapito scored a brace of tries off this platform and showed he is not just a finisher but a creator to offload on a number of occasions to his waiting team mates.

Cathal Malone showed some very good support play and anticipation to score in the corner. Also new kid on the block, James King showed some nice footwork to link play when a back move had a come to a halt. The final score was 5-2 to Dundalk.

Team B, picked up from they left off in the first with the rucking again to the fore. A brace of tries came in the first half with Adam Martin’s hard running combined with rips reaping rewards for Dundalk.

James McGee made a number of searing runs to open up the Galwegians defence. James Reenan took care of business when defending was needed and indeed made the Dundalk side almost water tight. This match finished 7-3.

The Dundalk U10s have played 20 fixtures this year and it has been a hell of a journey with the win to loss ratio very much stacked the right way. The boys have been adding to their skill set every week and look nothing like what started out in September. But now they - and their hard pressed parents - need a well earned rest. Well done and a credit to their club, town and families.