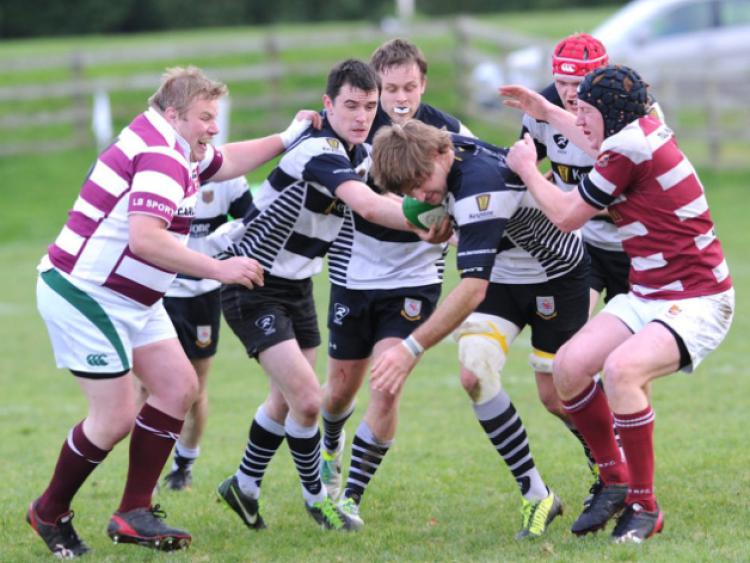 Dundalk confirmed a second place finish in Leinster League 1A for 2014 with a hard earned draw away to Tullow on Saturday. It took a spirited last 20 minutes from the Dundalk men to reduce a 17 point deficit.

Dundalk confirmed a second place finish in Leinster League 1A for 2014 with a hard earned draw away to Tullow on Saturday. It took a spirited last 20 minutes from the Dundalk men to reduce a 17 point deficit.

The Tullow men, who had Ireland and Lions star Sean O’Brien on their sideline giving instructions, were the much better team throughout and looked the hungrier of the two sides. However Dundalk did start off the brighter although all the Mill Road men had to show for their efforts early on was a penalty from the boot of Ultan Murphy.

Tullow responded through out-half Willie Cavanagh who kicked two fine penalties in quick succession to put the home side 6-3 up.

Dundalk’s defence, which has been one of the team’s assets all season, was not up to its usual standards and it wasn’t long before the Tullow loose head broke another tackle to offload to his support runner for the opening try of the game that was converted. This left the score 13-3 at half time and it looked like some of the Dundalk side would have been happier to have stayed on the bus.

There was little or no improvement in Dundalk’s performance in the opening 20 minutes of the second half. To make matters worse, they conceded another converted try which was well finished by the Tullow backline.

Seventeen points down with 20 minutes to play, it looked like this game was only heading in one direction. But credit most go to Dundalk and their never say die attitude. Ene Faatau’s side regrouped and Ciaran Brannigan came off the bench to add some impetus.

Dundalk went back to a more direct game, resulting in quicker ruck ball which put huge pressure on Tullow’s defence. Gaps started to open and soon Johnny Gray made some good yards before offloading to Owen McNally who got over for Dundalk’s first try, which Murphy converted.

There was now a spring in Dundalk’s step and the tiring home side were soon punished for an offside and Murphy kicked a monstrous penalty from out wide on the left sideline to close the gap to seven. Dundalk had nothing to lose and threw caution to the wind.

It paid off when Mike Bentley got through a gap and sped his way past the covering defence. It looked like a certain try only for a last ditch shoulder tackle by Tullow’s fullback in the corner put the Zimbabwean into touch. The referee deemed the tackle to be illegal and awarded Dundalk a penalty try to the dismay of the home crowd. Murphy added the extras from under the posts to rescue the draw.

Dundalk will be delighted to have secured second place in the league in what overall has been a satisfactory season. They have one league game remaining with Coolmine at home on Friday night before their Towns Cup quarter-final away to Enniscorthy a week later.