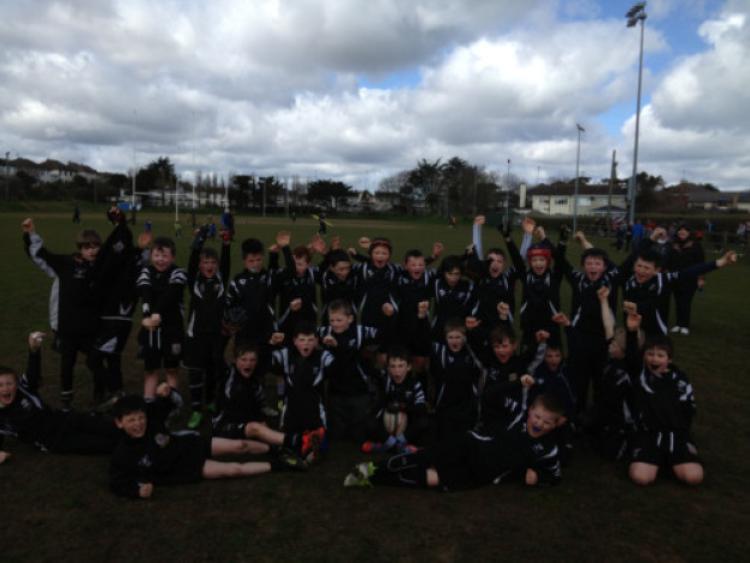 Dundalk Sharks U9s made the early Sunday morning trip to Skerries RFC for an end of season blitz.

Dundalk Sharks U9s made the early Sunday morning trip to Skerries RFC for an end of season blitz.

It has been well documented that the U9s have been on fire this season, winning all their matches in the Metro League, however Skerries have proven to be their bogey side in the past so the boys were determined to put in a good display and prove their credentials beyond doubt. Dundalk fielded two teams initially, the Black Sharks and White Sharks, but a third team ~”the Silver Sharks” were thrown together at the last minute following a suggestion from Sherries coach Shane.

The Black Sharks were first into action against a very physical and powerful Boyne side. Boyne made their presence felt from the off, but some slick passing and running lead to Jack Gilbourne opening the scoring making it 1-0 Dundalk.

From the restart some fantastic tackling and ripping from Laurence Jones and Ronan McDonnell set up Sam Malone for a trademark effort to make it 2-0.

A swift Boyne reply made it 2-1, immediately answered when Fiacra O’Gorman drove through the Boyne defence with Sam Malone recycling the ball from the ensuing ruck and making it 3-1.

Again Boyne responded swiftly using the direct route and taking advantage of their vastly superior physicality, reducing the deficit to a solitary try yet again. Kieran McArdle then announced his arrival into the game with an excellent solo run try to make it 4-2 and after another Boyne riposte, he scored again after great forward play from Ronan McDonnell to make the score 5-3. In keeping with the pattern of the game Boyne scored again, reducing the deficit to 5-4 at half time. An absorbing and bruising encounter for both sides.

The Black Sharks started the second half in style, with 4 unanswered tries coming from Sam Malone and Kieran McArdle, who scored two each as the Sharks moved into a commanding 9-4 lead. Although Boyne rallied hard in the closing stages, they would only add two more tries, leaving a final score of 9-6 to the Black Sharks and a commanding victory.

Match 2 for the Black Sharks was against Navan and the scoreline probably disguised a competitive, bruising encounter. Navan then pulled one back late on but it was all Sharks finishing 4-1.

The final match was against old nemesis Skerries and the Black Sharks showed how far they have come under the guidance of Jason, Fergus and the team. Fantastic rucking by Laurence Jones and Ronan McDonnell created a great try for Laurence Jones.

Skerries barely had time to draw breath before that man Kieran McArdle touched down yet again to make it 2-0.

Then Ronan McDonnell got a well earned third for the Sharks to go 3-0 ahead which capped off a good performance on the day for him. Skerries then came back into the match with 2 unanswered tries to make it 3-2 and they were starting to sense an unlikely comeback. However, Kieran McArdle was having none of that, the man of the match capping off a fine days play with two excellent tries.

The White Sharks commenced their proceedings against Balbriggan and showed no mercy. The final score of 11-1 didn’t flatter the White Sharks as they finished off their opponents with clinical ruthlessness. Notable for the White Sharks was fantastic competing at the breakdown, rucking, turnovers and tackling from the likes of Fionn Duffy, Lorcan Ticehurst, Jonny Jones and Aaron McGuinness Smith. The tries in the match were scored by Ciaran Tiernan (2), Fionn Duffy (2), Niall Brennan (3), Leo MacRuairi, James O’Connor (2), Aaron McGuinness Smith (2),

Next up were the Boyne side that were fresh from a bruising encounter with the Black Sharks and were sure to provide a sterner test, and so it proved. Lorcan Ticehurst continued his excellent play on the day with the first try of the match, but in a typically bruising encounter Boyne just edged a 2-1 half time lead and it eventually finished 5-3 to the Sharks.

Onto the final match of the day against Navan and once again the White Sharks ran out convincing winners. A clean sweep from the White Sharks, which made it 6 out of 6 for Dundalk on the day.