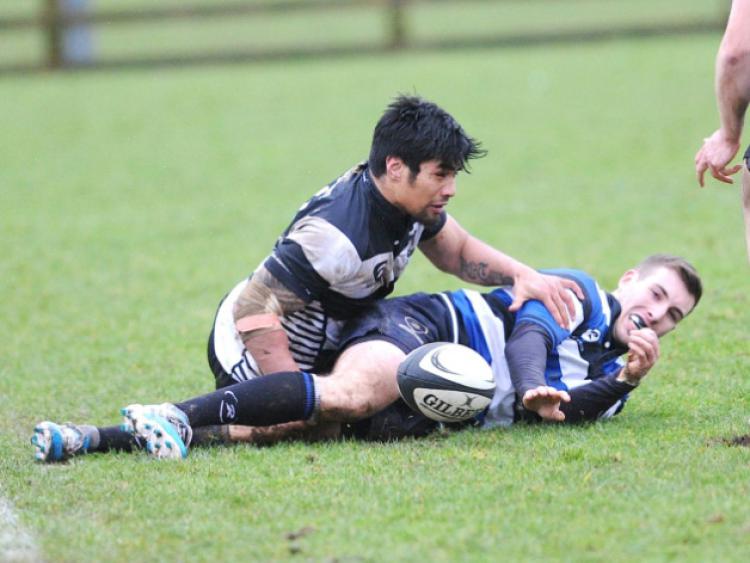 Dundalk were looking to end their run of two straight defeats on Saturday when they faced already crowned league champions Wanderers at the Mill Road.

Dundalk were looking to end their run of two straight defeats on Saturday when they faced already crowned league champions Wanderers at the Mill Road.

They were hoping for a win that would secure them second place in the league and also give them a much needed morale boost ahead of their Towns Cup campaign which kicks off this Sunday away to Athy.

It was the home side who started off the stronger. Some clever kicking by full back James Shields and scrum-half Thomas Campbell helped to pin Wanderers deep inside their own half, playing some good passages.

After a period of sustained pressure Dundalk were a awarded a kickable penalty under the posts and quick thinking by Ultan Murphy had seen that all the Wanderers defenders had crowded under the posts; he quickly tapped the ball and darted over the line to score the opening try which was not converted.

This seemed to awaken Wanderers who had their best period of the match. Dundalk’s defence was able to cope with their attack but were struggling to contain the Dublin’s side’s large pack especially at line-out and scrum time.

It was from a scrum that they were awarded a penalty and their out-half was able to give them their first points of the match. From a lineout shortly afterwards, the Dublin side set up a maul and drove their way over the line for a try which their out-half also converted.

There was great spirit shown from the home side throughout the match and they stuck to their guns and soon had play back inside the Wanderers half. MJ McKevitt was making strong yards in the middle and was well supported by James McConnon and Stephen Martin. They were awarded for their gritty efforts with another penalty which Murphy duly converted to leave the score 10-8 to the Dublin side at half time.

The champions were definitely rattled and you could see the belief in the home side lifting as Wanderers were happy to kick the ball deep into the Dundalk half. It paid dividends for them and some silly errors and indiscipline by Dundalk gave Wanderers some kickable penalties and they duly obliged, kicking two penalties to stretch their lead out to eight points, 16-8.

However, Dundalk dug deep and played some tremendous rugby considering the conditions. Murphy added another penalty when Wanderers strayed offside to put five between them. The Mill Road men give it everything up to the final whistle but this was as close as they got.

Ene Faatau will be pleased with the attitude and aggression shown by his players. There was much improvement from the last two performances and more will be needed if they are to have any success in this year’s Towns Cups while the return of Robert Farrell will be a major boost to the squad as Dundalk head to Athy.