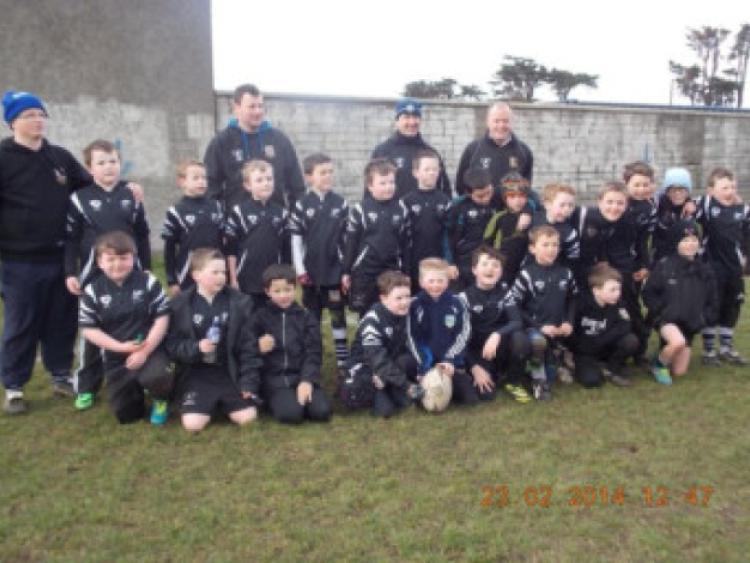 The Dundalk U9 squad headed to North Dublin early on Sunday morning to compete against Suttonians in the Metro League. After two earlier cancellations of blitzes in the year due to the weather, this was their first outing since Christmas.

The Dundalk U9 squad headed to North Dublin early on Sunday morning to compete against Suttonians in the Metro League. After two earlier cancellations of blitzes in the year due to the weather, this was their first outing since Christmas.

The inactivity had not curbed their enthusiasm or passion as 23 players travelled comprising three teams and each team played three games each.

The Black Sharks played some excellent rugby right from the off.

Darragh Collier and Ryan Martin were very aggressive in the tackle with Jake Kenny and Donal Lavery reaping the benefits.

Eoin Purton and Ciaran Leyden were a menace at the breakdown and forced Suttonians to surrender possession on numerous occasions. Euan McArdle and DD Reilly provided the creative spark as their mazy and intricate runs caused problems in the home defence all day.

The White Sharks were under the cosh early in the first match but soon got into their groove with Iarlaith Connolly and Max Valentine leading the charge.

Their momentum continued into their second match with some fine play from Cian McGuiness and Eamon Donnelly.

An element of this team’s success was the sensational rucking by Thomas McNamara and Jacob Dunlevy.

They continually disrupted Suttonians’ attacks and provided ‘go-forward’ ball for the rest of the team. One player to benefit was Luke O Connell who clocked up a hat trick of superb tries in the final game.

The Grey Sharks immediately and played some beautiful continuity rugby throughout the day.

Michael Carroll and Adam McCoy were thorns in the opposition’s defence all day and put some fantastic tries on the scoreboard.

Oran Rafferty and Liam McNamara provided some very slick passes to allow Liam O’Connor and David Coyle to use their considerable pace to notch up some brilliant tries.

A feature of these games was Dundalk’s strength on the ball and this was manifested no better than when Ewan Kelly and Enda Dooley drove the Suttonians players back both in defence and attack and were a credit to their team.