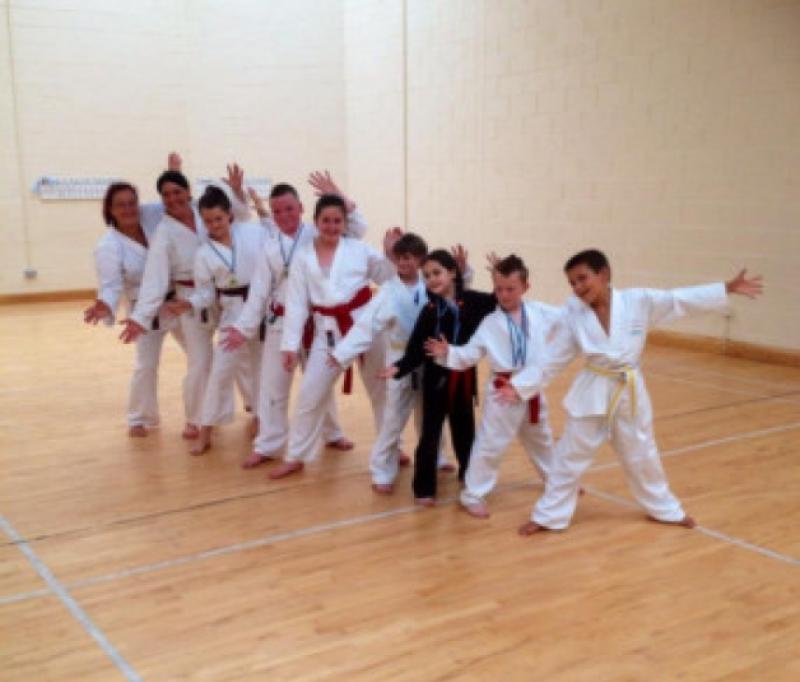 Considering the fantastic weather of late and school summer holidays, huge numbers from clubs all over Ireland travelled to Artane, Dublin to attend this very first Summer Karate Championships.

Dundalk Karate who have been training non-stop throughout the summer heat are now seeing the dividends of all their hard work. Sensei Mary Marcus, Head of Dundalk Karate said: “When a student is dedicated and attends training, this will inevitably show dividends in the long run.

“Many students take a break during the summer months but with members of Dundalk Karate having the support of their parents and deciding to train even during our recent hot weather, it is no wonder that every member is reaping the rewards of all their hard work.”

First to compete in their Kata Category (form) was Liam Hoey and Kata McNamara, who ended up going head to head in the final round which had their Sensei, Mary Marcus and all their family and friends holding their breaths for the outcome.

Gold was awarded to Liam and silver to Katie, and to say that the whole of Dundalk Karate were jumping up and down in celebration was an understatement.

This was to set the scene for the rest of the day. Next up was Chloe Joyce who came joint 4th, just narrowly missing out in her hugely subscribed Kata Category.

Following in his sister’s footsteps and with everyone on tenterhooks, Christopher Joyce took to the tatami matts for his Kata Category where everyone say him up against seasoned competitors and not only did he hold his nerve and manage to qualify for the final round, he was awarded a silver which was a huge achievement for Christopher.

With all the Kata Categories completed, Kumite (fighting) was up next.

First up was Katie McNamara who, without a shadow of a doubt, fought her way to an amazing first place, taking home a gold Medal.

This was quickly followed by Liam Hoey who fought his way to the final where having the score tied with his opponent, the decision went to Hantai where the judges decided on the winner. When Liam Hoey was awarded first place, taking gold yet again, the whole hall erupted in huge applause.

Following next was Christopher Joyce who narrowly missed out on a medal but with numerous coaches and judges remarking on his huge improvement since a previous competition, this was an outcome everyone including his Sensei, Mary Marcus was chuffed about.

To round off the day, Catherine Marcus appeared in the U15 Kumite Category. With all members of Dundalk Karate, family and friends taking up every available spectator’s space, the scene was set for yet another team support network.

“It was a pleasure to see so many students do so well after all their training in the dojo,” said Sensei Marcus.

“Everyone gave 100%, and everyone has not only gained confidence in their abilities to compete against seasoned competitors but they have come together even more as a closely knit club with friendships that will last a lifetime.”

If you would like any further information on Dundalk Karate, why not contact Mary Marcus at karatequeen@live.com or by phone on 0863531625.