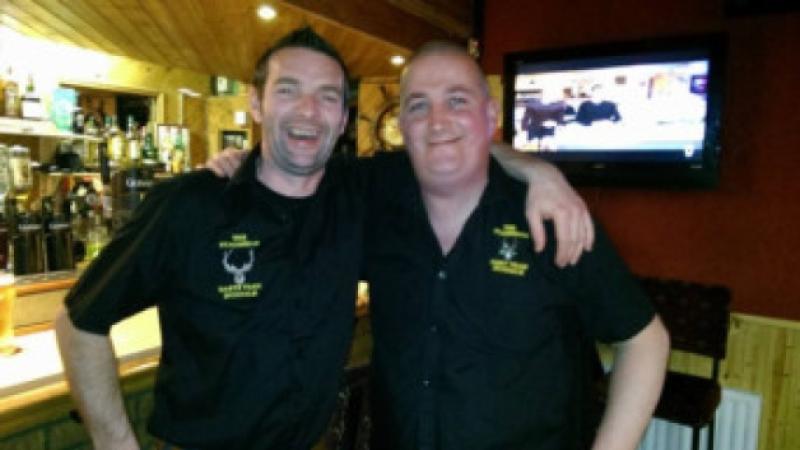 The Second Division may be the lowest tier in the Tuborg Dundalk and District Darts League but the games are just as exciting as those in the top was the view of one spectator in the Commercial Club last week.

The Second Division may be the lowest tier in the Tuborg Dundalk and District Darts League but the games are just as exciting as those in the top was the view of one spectator in the Commercial Club last week.

The Club was the venue for a league match between Commercial Hawks and Johnny Masons and a challenge match between Castlebar Knights from the Second Division and the Commercial 1896 who both had a bye in their respective divisions.

Three teams from the Second Division provided darts of Premier Division quality. The first game between the Hawks and the Masons saw Ronan Browne put on his shooting boots as he hit the treble 20 with regularity in his match with ‘La Quinn’. Browne hit the winning double and gave the visiting team the lead.

The next game saw Mark Flynn restore parity for the Hawks when he pipped local darts veteran Burt Reynolds to the post in a close game which once again went all the way to a deciding leg. This was the end of the Hawks’ challenge as they soon tasted the steel that has taken Johnny Masons into the top two in the division. The end result of 5-1 to Masons doesn’t highlight how well both teams threw on the night

In this game, the Gyles Quay native had been scoring well but the doubles that counted had been hit by the Misfit. Unfortunately this was as good as it got for the home team who couldn’t build on this lead. The Ferguson’s team are an effective machine once they get going and they showed the accuracy that has them on the top of the division. Adam McDonnell was the star of the show for the visiting team who showed that they won’t be removed from pole position too easily. The Stag’s ‘Mighty’ White team faced the Punters Tigers and like all games in the division they knew it couldn’t be taken lightly.

The visiting Stag’s team went in with the intentions of a jungle hunter and they soon had taken the pelt from three Tigers.

The Tigers fought back and it was brought right down to the last game. Chris McMahon has found the accuracy needed by every hunter and he hit the winning double that sadly knocked the Tigers back to lick their wounds and get ready for next week’s battle.

Another week goes by where Division One has shown that there is very little between the teams and another week where the top two teams won’t give an inch for fear of the other taking a mile and running into a lead.

The season has two weeks to go and Harry’s Bar still have the possibility of winning a league and cup double. They travelled to Avenue Celtic this week knowing victory was the only option. The Avenue team got off to a great start with Wayne Rodgers taking the first game. He showed his class with a 2-0 win and hitting 4 x 100s on his way to victory.

Stephen McQuillan equalled Rodgers’ high scores but was pushed all the way by John Kelly who has only recently started playing league darts but is showing he has the nerve to take on the best. This game was definitely not the easy ride that the Harry’s team might have wished for and it was down to Andrew Neary to take the win for the Bridge Street team.  It has been said that “pressure is something you feel when you don’t know what you are doing”. Well if this is the case, the Stag’s Green machine certainly know what they are doing.

Top of the table in Division One, they are calmly taking on each game as if it was the first in the league. They certainly had to hold their nerve against Oriel Active this week as Darren Kerley showed extreme calmness to overcome ‘Mighty’ Mickey Gartland to ensure his side victory in the very last leg of the night. The title race is still on and they are neck and neck with two to jump.

The Premier Division game between Jackie’s Army and The Stag’s saw two maximums hit in the first game and this continued into the next two.

Ray Campbell continued the scoring form that saw him get to the semi-finals of the recent Belfast City Open and Martin Carvill has been getting better every week as he travels with the PDC Challenge Tour.

In the game between the Avenue Eagles and the Stag’s Black, the same 180 sound was to be heard as maximum scores were hit by Joe Finnegan and Owen Caffrey.