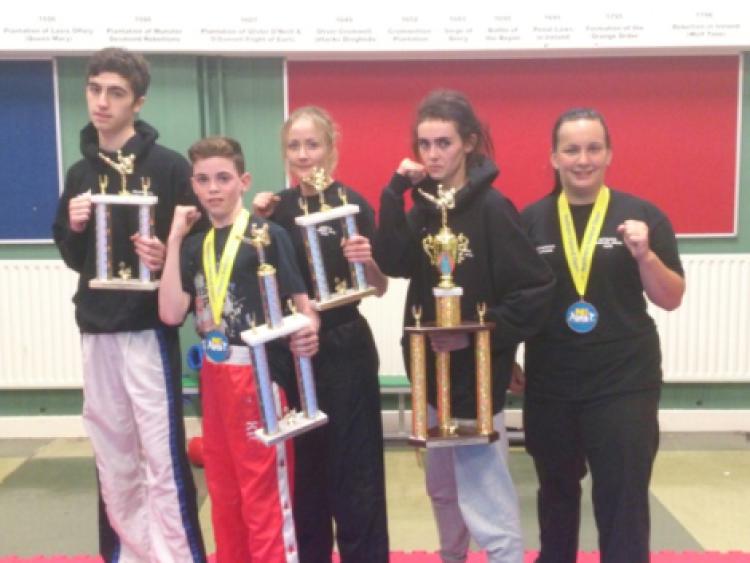 It may not even be a year old at this stage but Dundalk Martial Arts Club (DMAC) is a club that is consistently going from strength to strength and producing champions on a regular basis.

It may not even be a year old at this stage but Dundalk Martial Arts Club (DMAC) is a club that is consistently going from strength to strength and producing champions on a regular basis.

The Northern Irish Open is a large competition with hundreds of fighters from Ireland and the UK traveling to compete at the event.

Six fighters from DMAC entered the competition and between them they returned home with nine titles.

Catherine Pearson entered the ladies +65kgs points division, narrowly missing out on a place in the final and received a bronze medal.

Catherine O’Grady entered the ladies -60kg light contact division where she fought amazingly, pushing her competitors through every round to the final where she secured gold. All DMAC members would like to wish Catherine the best of luck this year while she trains hard in Russia.

Martina Goss entered two sections, the veterans -60kgs where she won gold and the ladies -55kgs points in the final she fought exceptionally well and earned a silver medal.

Sean O’Hare fought in the boy 15-17yrs +165 inch points section where he reached the final and fought fantastically well, returning home with the silver.

Patrick Farrelly entered both the 12-14yrs -165 inch points and light contact sections. Patrick was an outstanding fighter on the day, securing the silver medal in points and bronze on light contact.

For brother Christian Farrelly, it was an equally successful day entering both the 15-17yrs -165 inch points and light contact sections. After fighting extremely well, he secured silver in points and bronze in light contact.