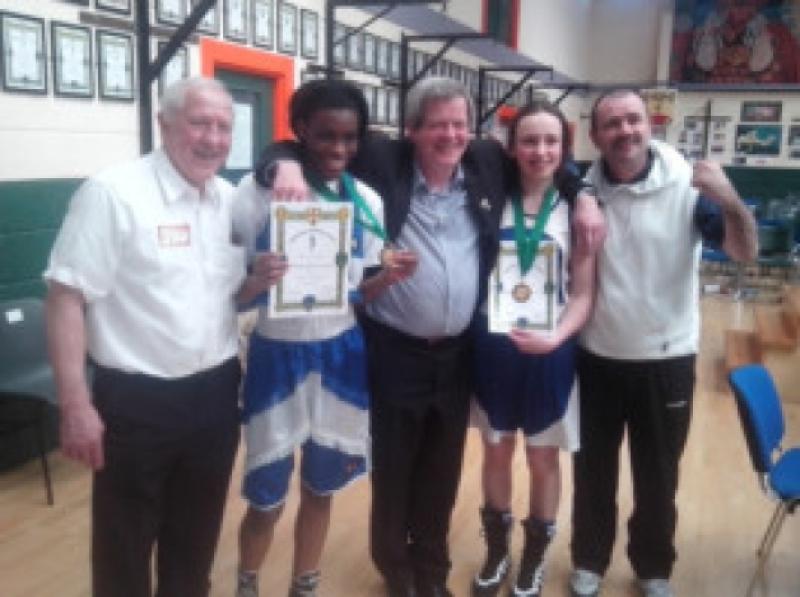 Three female boxers from Clann Naofa Boxing Academy in Muirhevnamor had the opportunity to represent Co Louth at the Leinster Girls Championships held in the club recently.

Three female boxers from Clann Naofa Boxing Academy in Muirhevnamor had the opportunity to represent Co Louth at the Leinster Girls Championships held in the club recently.

Evelyn Igharo and sisters Naomi and Shauna O’Callaghan gave a great account of themselves and all three emerged victorious to be crowned provincial champions.

Evelyn is the current Irish champion and also went into the ring defending her Leinster title. Her first opponent was Louise Fitzgerald from Offaly and Evelyn emerged victorious with a Technical Knockout (TKO) in the first round.

Her second fight was of a more parochial nature and the shouts of support from both camps created an electric atmosphere.

The reason for the intense atmosphere was because both young ladies were from Co Louth, Evelyn from Clann Naofa and G Vieverytie from Drogheda Boxing Club - which is also the home club of the President of the IBA.

The friendly rivalry that exists between both clubs made this one of the most gripping bouts of the entire two day event.

In the first round Evelyn came out, and with a straight left jab, left her opponent on the ropes. A second jab had the Drogheda girl on the floor and the referee counted her out. The response to this victory for the sole representative of host town Dundalk was spontaneous and explosive.

Evelyn was made more than aware of the very positive response to her victory from her team-mates and supporters from the club, the community, town and county.

This Clann Naofa girl has a very positive attitude to her talent and is a very unassuming hardworking young lady. The pride felt by her club and local community in her achievements is very palpable and will go with her into her future bouts.

In her first outing, Shauna O’Callaghan came up against Laura Kelly. Both fighters were familiar with each other having met in the semi-final of the Leinster Championship so Shauna was aware that she was facing a worthy opponent.

In the first round Shauna edged her way to victory in a hard fought battle. The second round saw the Dundalk girl emerge as the more confident boxer and with her sheer determination and very proficient boxing skills defeat was not an option for this Clann Naofa girl.

In the final, Shauna fought N Dermody from the Paul’s Town Club, Kilkenny and again her fitness and determination saw her once again emerge victorious in a nail biting performance.

Sister Naomi O’Callaghan entered the championship as the number one boxer in her age group in the country. A very determined boxer, Naomi exhibits very strong boxing skills and pursues victory in all her fights.

Her opponents were very aware of her reputation and Naomi did not need to use much force to ensure victory over her opponents. This saw her to gain her second Leinster title victory and she is now training hard for the return match to retain her All Ireland title.

These very positive traits, exhibited by all three Clann Naofa girls, are wonderful assets to their club and the trio are held in great respect by both club coaches and club-mates alike.

In a time where young people appear to receive negative reports in the media, it is heartening to see their hard work and great results pay off, empowering them to become positive role models. If their current performance is an indicator of future possibilities, it is entirely possible we will see these represent their country at the Olympic Games in the near future.

Clann Naofa Boxing Academy would like to take this opportunity to thank those who helped make the weekend such a successful event. This includes community and boxing centre staff, parents and supporters who volunteered their time over the two day event.

The Clann Naofa girls will now attend to compete in the Irish Championships and everybody at the club would like to take this opportunity to wish all the girls the very best of luck in the National Championships which take place in The National Stadium, Dublin on May 9.