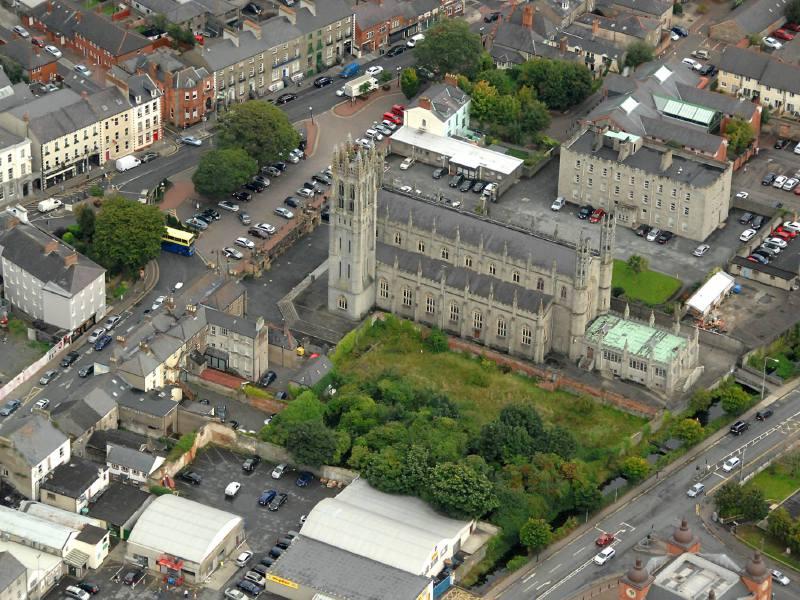 Any Dundalk person born in 1947, whether they realise it or not, are part of a unique generation who represent a transition of old Dundalk into the new town that we know today.

They were part of a 'baby boom' that followed the end of World War 11 and, more importantly, the end of 'The Emergency' of that period which had those of us, who are still alive today, hoping that we were embarking on a much safer and more prosperous Europe. It did not turn out quite that way but did give a lot of fresh hope for the future!

The thing that gave us most hope, however, was the building of many new houses around the town in the post-War period and the first major housing scheme undertaken by the Dundalk Urban District Council in the post-War years was Cluan Enda, 'St. Enda's Meadow'.

I do not know how the name came to be chosen but I suspect that it had a lot to do with the influence of Peadar Ó Dubhda who was elected Chairman of the Council just at the end of the War in June of 1945. Enda was a legendary chief of the old kingdom of Oriel, a sub-kingdom of the province of Ulaidh, in the fifth century who was reputed to have been a pagan who was converted to Christianity by his sister Fanchea. He went on to found a Monastery in the Aran Islands and his Feast Day is on March 21. It was probably not because of the sanctity of his later life that the name of the originally fierce local warrior was chosen but because it was also the name chosen by Padraig Pearse for his revolutionary Gaelic school in Dublin in 1908, with which Ó Dubhda would have been very familiar!

Cluan Enda was not the only Council housing scheme completed in 1947, Mulholland Avenue, with 27 houses, was completed in the same year but it was the largest since prior to the War. It was also unique in its design as it was the first local authority estate here to have a large green open space. Its 79 houses were built on a site opposite the 48 St. Alphonsus Villas houses which had been completed ten years earlier and which, together with half-a-dozen private houses built on the Long Avenue Road side of the Redemptorist Hill in the 1930s, created a new community on the south side of the Greenore Railway line. This community of nearly 150 new houses also created a new environment where people who had previously lived in other parts town were brought together for the first time and old loyalties to certain neighbourhoods of old Dundalk began to be broken down.

I can speak with some authority about the growth of Cluan Enda because I grew up along with the families living in it. I can recall the time when there were small allotments provided by the Urban Council to grow food during the hungry period of the Emergency. For this reason it was easy for the Council to acquire the land on which to built these 79 new houses not far from the centre of town. It was surrounded on two sides by Patrick J. Murphy's farm and the only other field between the allotments and the Backwater Stream was owned by Joe O'Mara who had a sporting goods shop in Earl Street. Pat Murphy, whose family came from Stonetown and went back to the eighteenth century also had a business in Earl Street, beside the old Dundalk Democrat offices.

Incidentally, I have been told recently that his niece Teresa Murphy who was a commercial teacher at St. Vincent's Secondary School who also taught shorthand and typing privately at 2, Earl Street is still alive and should be the grand old age of 101 next March! There is another potential centenarian, Annie McArdle, still living in Cluan Enda who will be 100 if she makes it to next July.

There must be something in the air of The Marshes which breathes longevity into the people who live there as there was another couple who were not far off the 100 mark before they passed away over the past couple of years. Pat and Maura Mulgrew were, in a way, typical of the neighbourly people who lived there for now nearly three parts of a century. Maura who was a Flynn from the Quay Street area of town, was a daughter of the famous Packie Flynn who was one of the fabled '100' who marched out of Dundalk on Easter Sunday 1916 to take part in the Rising; most of them did not make it to Dublin but that does take away from their patriotism and bravery. Maura was, herself, a wonderful person and a good neighbour. Pat who passed away in July of last year, was a soldier from Cavan who came to the Military Barracks as part of the Cyclists Squadron who did duty here during the Emergency. He told me, at the time of his wife's death, that he and Maura had been the last of the young married couples who had been allocate houses in Cluan Enda in 1947.

Cluan Enda has changed a lot in my lifetime, from being a boisterous young estate, with children swarming everywhere, to a quiet suburb of the town where many of the occupants of the houses are now retired.

Dundalk , in this time of housing shortages, could do with another estate like Cluan Enda, where the people have learned to live in harmony and friendship!