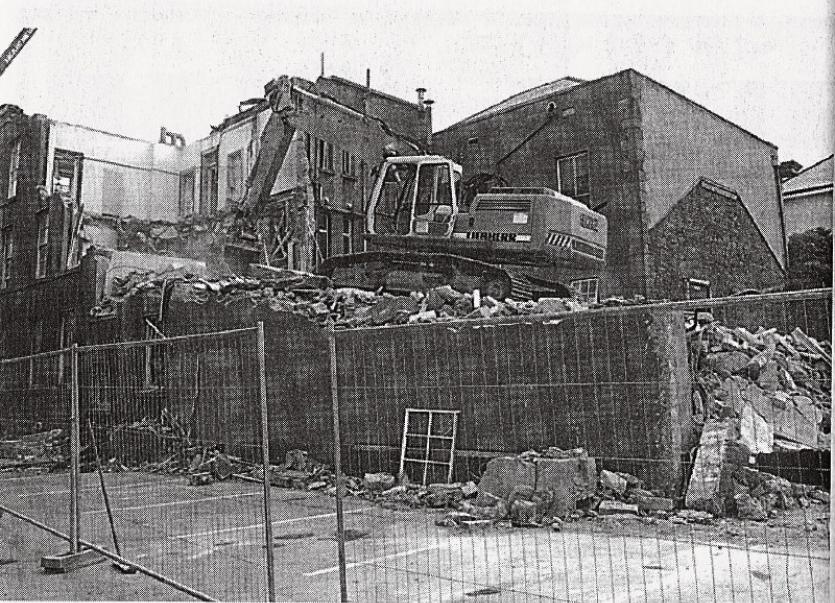 We are now well into the twentieth century and it surprises me how many young, and some not so young, Dundalk people who think that the 1980s was a very long time ago! Well, time moves on and there is nothing that we can do about it but that does not mean that we should forget about our heritage, warts and all! To me 1989, when Dundalk celebrated its Heritage Year, is still fairly fresh in my memory but, still, there are a few important events that have taken place in the town since I began writing these notes at the beginning of present millennium just sixteen years ago.

Take for example the building of the County Hall at St. Alphonsus Road. I remember that event fairly well but I had forgotten about the demolition of the old County Council offices at Crowe Street. That was commenced exactly fifteen years ago next week, at the beginning of June 2001 and yet that event was very significant in the history of the town. It might surprise some of my readers to learn that those offices were not so very old but were built over one of the last visual parts of the old Jail which had stood on the site for over 100 years. There is a description in an edition of the Democrat of the early nineteen thirties of the knocking down of this old three storey 'West Wing' of the old prison which, I think had been used for the housing of debtors before the last prisoners were moved to the new Jail at the Crescent in 1854. Joseph Cartan, the first Editor of the Democrat, spent some time in here after he was jailed for failing to pay a fine for an alleged libel of Lord Carlingford during an election campaign of the 1850s.

The Council offices were built in 1931, more than thirty years after the establishment of the County Council in 1899 and were 'state of the art' for the period but had become over-crowded before the end of the twentieth century. The original Council members had met for their monthly meetings in the Boardroom of the Courthouse which was completed in 1820 and continued to do so right up until the new chamber was furnished in the present County Hall. There had been much discussion at these meetings about the building of new offices on the site of the 1930s building and plans were drawn up for such a project but the problem was that the local authorities could not establish a lease for the site which had, originally been the property of the Grand Jury.

An interesting find when the foundations of the Council offices was being excavated was that many human bones were uncovered on the site. I recall that my father, who had arrived in town just before that time, told me that it was speculated that they were the remains of persons who had been executed on a gallows that stood at the front of the old Jail in Crowe Street and buried in the old prison yard. The last public execution took place in July 1851 and there may have been other hangings in the jail, before and after that date. The truth is, however, that they were probably the remains of persons who had died in the jail over a century, due to sickness or just old age! Unfortunately there seems to have been no archaeological or forensic examinations of those bones and I do not know where they were re-interred.

Whoever they were, it seems a pity that there is no memorial on the site to those who were executed, probably many of them quite innocent of the crimes for which they were convicted. About twelve men were executed in Crowe Street in 1817 and 1818 for their involvement in the Ribbon men conspiracy which led to the atrocity of the burning of Wild Goose Lodge in October 1816. This has gained much interest at present with the making of the film about the event which won acclaim in New York recently. Where exactly these men were gibbeted (their remains displayed in a cage) for some time after their execution is in some dispute but it was certain that it was in the vicinity of the present Courthouse which was being built at the time. Some of the 28 convicted and gibbeted throughout the County for this horrendous crime, in which eight or nine people were burned to death, were undoubtedly guilty but some of them were probably completely innocent and the victims of others giving false evidence evidence to save their own skins!

Looking at the reports of the demolition of the County Offices in Crowe Street I see that it is fifteen years also since the introduction of written tests for those who are applying for driving licences. This measure was introduced Monday June 11, 2001 but I have not seen any research into the effect of it on Road Safety.

I come from a time when you could get a licence to drive practically any vehicle on the road by just going into the County Council offices set up for this purpose and paying just one pound sterling. Driving tests were introduced in the U.K., including Northern Ireland, much earlier and it used to be a bit of a surprise to those who had to emigrate or just do business in the North that they had to pass such a test.

The test, when it was introduced here, probably was a good thing but I have yet to be convinced that the written tests did any good. There still an awful lot of bad and careless drivers on the roads at the present time!