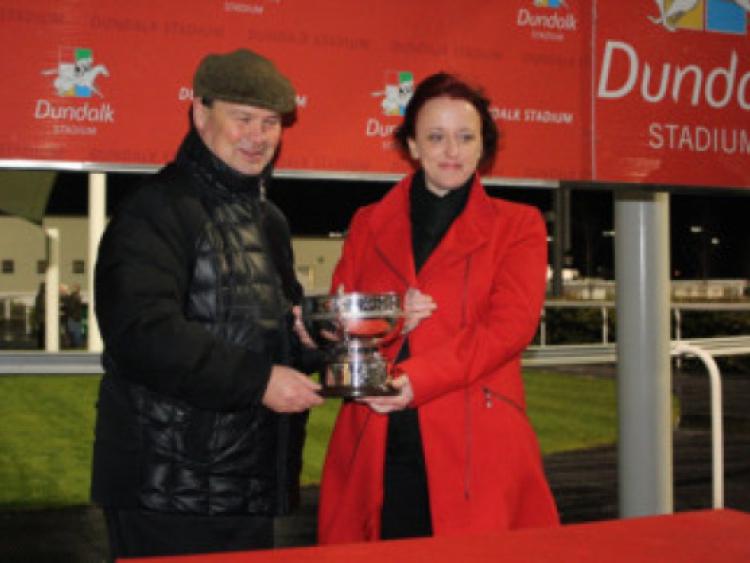 Mick Halford and his stand-in jockey Conor Hoban combined to land a double with Hazledoc and Rummaging in Dundalk Stadium’s final horse racing meet of the year on December 20.

Mick Halford and his stand-in jockey Conor Hoban combined to land a double with Hazledoc and Rummaging in Dundalk Stadium’s final horse racing meet of the year on December 20.

It also secured Halford top spot in The Crowne Plaza Dundalk Leading Trainer Award table, as he overtook Eddie Lynam thanks to the double.

Halford and Hoban duo opened their account when the jockey, deputising for Shane Foley, got Hazledoc (7-2) home by a nose in an exciting finish to the Horse Racing Returns Friday 3rd January 2014 Nursery after the juvenile rallied to beat the gutsy Fight U For It by a nose.

Then 9-4 favourite Rummaging, who was looking for a gap in the closing stages, burst through to collar Antiquus close home for a half-length victory in the Crowne Plaza Leading Jockey and Trainer Awards 2013 Handicap.

Vector Force had found one too good in all three runs leading up to the Dundalk Stadium Racecourse Of The Year Maiden, but he was sent off the 4-6 favourite to put that right and snapped up the opportunity.

Colin Keane got away quickly and was soon at the head of affairs on Ger Lyons’ juvenile, and he kept on strongly down the straight to see off Shanooan by a length and a half.

There was a blanket finish to the Crowne Plaza Hotel Dundalk Rated Race and Wayne Lordan grabbed the prize late on by half a length on the Pat Shanahan-trained filly Dancing Cosmos (14-1), whose previous two wins came at Wolverhampton.

Shanahan came within a whisker of a double with That’s Plenty in the Crowne Plaza Hotel Race and Stay Handicap, but the spoils went to Sabrina Harty’s tough customer Ned’s Indian, who edged a short head in front on the line.

The 9-2 shot was ridden by Rory Cleary, who climbed off the floor to score after being thrown from Lady Society on the turn into the straight in Vector Force’s race an hour earlier.

Cleary doubled up when Terence O’Brien’s Ballyadam Brook (25-1), whose last run was in a handicap chase at Cheltenham, shot clear heading for the straight in the closing Happy Christmas To All Our Patrons Maiden and won by three and a half lengths.