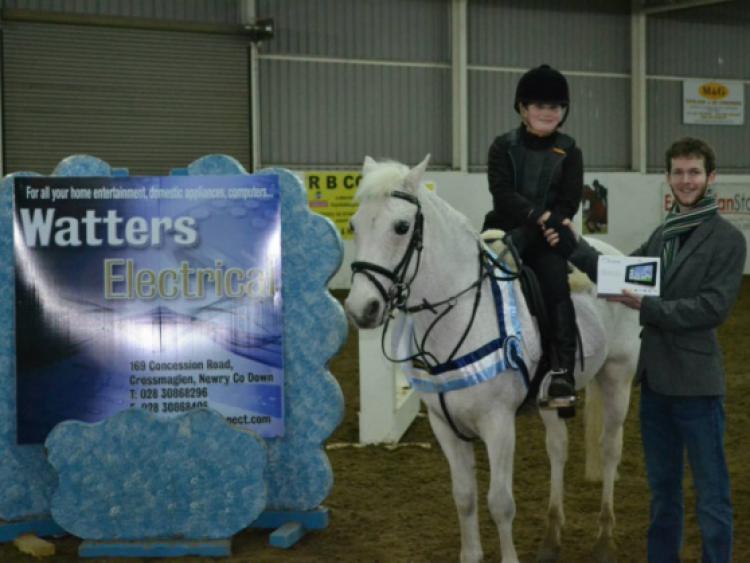 An excellent evening’s jumping was enjoyed, especially by the lucky prizewinners in each class and the winners of the Individual League classes who all received prizes and beautiful rosettes in the sponsors Watters’ distinctive blue colours.

The Watters Electrical Grand Final was a very close affair with just one point dividing several of the finalists. After eight weeks everyone was eagerly awaiting the results.

First category was the Starter Stakes with Kenny Treanor and Twinkle Toes easily holding on to their lead and taking the first major prize of the evening, a tablet from Watters’ Electrical Store.

Next up was The Pony Boy U16 final which again was won easily by James Russell and his pony Jack. James had a brilliant league, being in the ribbons every night on Jack and his other pony Rockie. Runner-up was another regular winner, Michael Morgan and Shirley’s Boy.

The leading Pony Girl U16 went to Sophie Kinghan on Rocky, just slightly ahead by one point of runner-up Clionadha McArdle and Freddie.

The Young Rider Horse section went to local Amy McVerry and Captain Tate again just one point ahead of Victoria McElwaine and Pandora D. Both these young riders enjoyed a very successful league.

Last, but not least, a popular winner in the Horse Over 16 category was Sam Nesbitt on his horse Roxy. Sam just managed to beat the other contender for the title Tommy Carragher and Bridgestone by one point and was very happy to accept his prize of a 22” flat screen TV from the sponsor’s representative James Watters.

James also presented the winners in all the other categories with their tablets, rosettes and sashes.