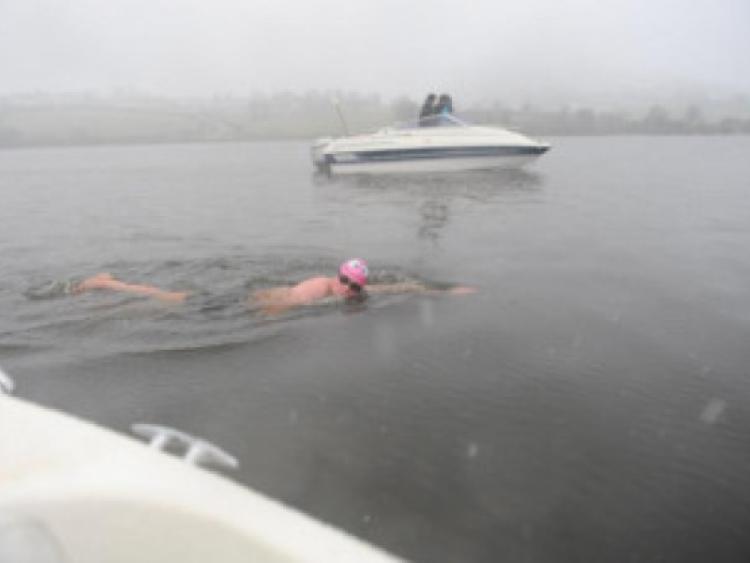 Iceman Andrew Coyle raised the bar for Irish open water swimmers by becoming the first person in Leinster, the 4th in Ireland and only the 36th in the world to become an recognised and approved international ice swimmer by the International Ice Swimming Association (IISA).

Iceman Andrew Coyle raised the bar for Irish open water swimmers by becoming the first person in Leinster, the 4th in Ireland and only the 36th in the world to become an recognised and approved international ice swimmer by the International Ice Swimming Association (IISA).

The Kilcurry man had to take to the icy waters of Camlough Lake to complete his challenge as the local sea was too warm.

A competitor must swim 1610m or one mile and all in regular swimming trunks with only one swimming hat. Each swimmer is required to pass a full medical assessment including a successful ECG and a series of acclimatization sessions including ice baths and plunge pools before being deemed as fit for the event.

A competitor has a fully manned boat for the journey including a medical team who monitor the swimmer at regular intervals. The swimmer must respond with thumbs up to the blow of a whistle.

Hypothermia signs are constantly monitored with blindness and swimmers coma just some of the risk factors involved. If a swimmer is not responding a quick medical decision is made to extract the swimmer from the water despite on many occasions the swimmer insisting that they are fine and determination to swim on. Each swimmer, once exiting the water, will begin the slow process of re-acclimatisation to normal body temperature.

Ice swimming began in 2008 and since then there has been many competitors who have tried their luck at the discipline. As many soon found out it is not for the faint hearted.

Coyle’s swim started at 3:30pm in the afternoon with snow falling. Andrew took to the cold water and got up to speed quickly. With each check by the boat crew Andrew gave the thumbs up each time. 90% of ice swimming is in the head so if your mind is in the right place you have a good chance of success.

Making it to the half way mark is good for your mind but this is where the work starts. Up to this point the body has been going into shut down but it’s all about trying to control it as best as you can. First the blood retreats from your core. Then your mind starts to slow down, making it hard to talk and see and work things out in your mind.

With 1300m swam Andrew’s swimming started to slow down. At the 1400m mark he started to find it hard to see and his speech started to slow. The safety crew started to make plans to remove Coyle from the water but Andrew pulled it together and hammered home and over the 1610m/one mile line.

Some might think that this was the end of the hard work. However the real pain was just about to start for Coyle. The recovery is one of the most risky parts due to a core tempura of only 29 degrees Celsius. If you heat up your core too fast there is a chance of a heart attack, too slow and hypothermia takes over.

The recovery can take anywhere from one to three hours depending on the person. It is also know for ice swimmers to slip back into hypothermia some three, four and even five hours after their ice swim. Thankfully, Andrew had a good recovery crew who looked after him until he was well out of harm’s way.

The International Ice Swimming Association, based in Cape Town, South Africa verified Andrew’s ice swim and awarded him the place of 36th ice swimmer in the world.

This has to be one of the most daring sporting achievements in Leinster this year.