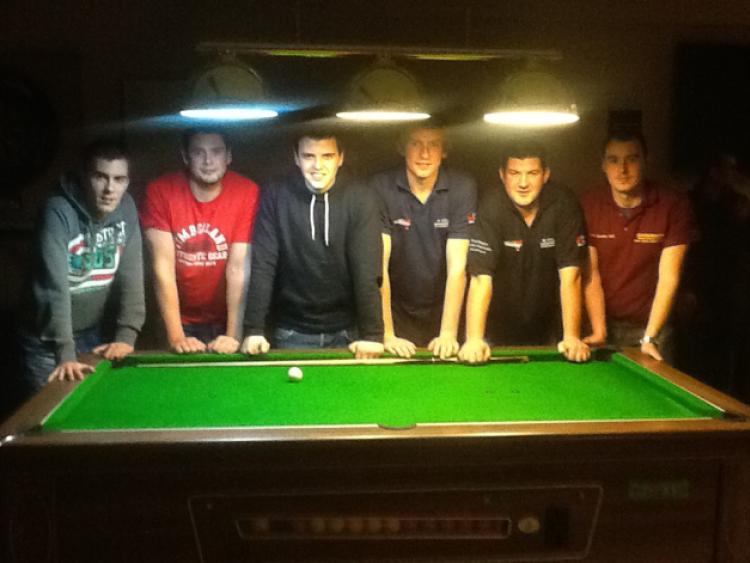 The first match was between snooker team mates Brendan Traynor (Eagles) and Aidan Kinsella and just when it looked like Brendan was going to win the first frame he miscued on his last ball. Aidan took full advantage of this error to take the first frame and he then proceeded to win the next to put Rovers 1-0 ahead.

The next match featured Dublin county player Graham Baitson (Eagles) and Stephen Gorham. Graham won the first frame only for Stephen to produce a brilliant seven ball clearance to level his match. Both players made mistakes in the decider, but it was Stephen who made the biggest mistake when it looked easier finish and Graham duly obliged to level the match at 1-1.

Match three featured the two captains Des Reenan (Eagles) and Pat Brady. It was Des who had the first chance only for him to run out of position. This gave Pat his opportunity and he made no mistake to go 1-0 ahead and he duly obliged in the next frame to put Rovers 2-1 ahead.

Match 4 was between John Dugdale (Rovers) and Wayne Rogers and it was John who finally rediscovered his form to beat Wayne 2-0 and put Rovers 3-1 ahead. In the final match Conor McDonnell rescued a bonus point for the Eagles when he beat an unfortunate John Browne 2-0 to leave the final score 3-2 to the Rovers.

Windmill Black got back to winning ways when they entertained Avenue Inn Swifts and although Keith Gorham gave the Swifts the lead when he beat Eamonn Farrell in the first match, the home team then replied to win the next four matches with victories for Chris Caulfield, Anthony Donegan, Peter McCluskey and Declan Grimes to complete a 4-1 victory and move them up to third in the table.

Callan’s travelled to play the Castle Bar Baize and recorded an excellent 3-2 victory to keep them in contention for a play-off place at the end of the season. Best for Callan’s were Kieran McCreesh and Garrett Callan while Benny McAleavey was best for the Baize when he got them a bonus point in the last game.