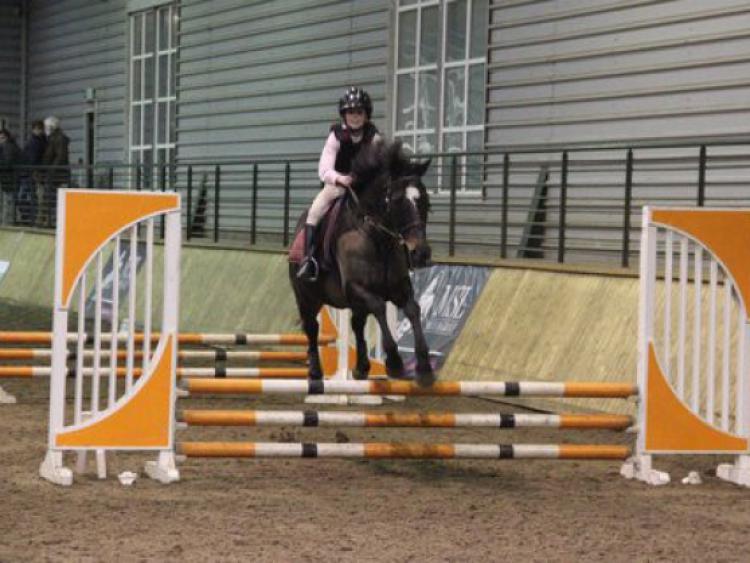 Ravensdale Lodge’s winter and spring season got off to a flying start this week with many combinations braving the cold, wet and windy weather to compete over four days at the centre.

Ravensdale Lodge’s winter and spring season got off to a flying start this week with many combinations braving the cold, wet and windy weather to compete over four days at the centre.

Saturday afternoon saw a great turn out for week one of the Mackin’s Horse Feeds indoor arena eventing league.

With many of the scheduled hunts cancelled due to the inclement weather, some combinations decided to try their hand at another form of jumping and had a great time while having superb conditions underfoot and not getting a wetting!

Professional event rider and producer, Jim Newsam who was recently married, arrived with his new bride Emma to jump a couple of young horses.

If Saturday afternoon’s event was anything to go by Jim won’t have to look much further than his own yard and partner in life for a run for his money as Emma was first of the newlyweds to go clear in the 1m class.

Jim followed shortly after and also put in a lovely clear round but was “pipped at the post” by Emma who went away with the bragging rights after the class as she drew the lucky rosette for the bag of Mackins Horse Feeds!

Alan Dewhurst took over the ride on his wife Jan’s wonderful cob Podge in Sunday afternoon’s indoor dressage league, putting in two fine performances to win both class 3 and 4 with ultra consistent scores of 72.27% and 72.08% respectively.

Jan, who has been sidelined due to injury, was delighted with the pairs performances considering it was Allan’s first time to partner Podge in a dressage test.

Competition continues this week with horse training on Thursday from 11am with classes from 70cm to 1.30m, this is an ideal opportunity to get horses out in advance of the Crowne Plaza Dundalk SJI registered horse league which gets underway on Thursday February 6.

Horse and pony training continues on Friday from 5.30pm with classes from X poles to 1.10m, Mackins Horse Feeds indoor arena eventing continues on Saturday with the 70cm class starting at 2pm, the 85cm class at 3pm and the 1m class at 4pm.

Week two of the indoor dressage league is on Sunday from 2pm and all weekly classes can be found on wwww.ravensdalelodge.com