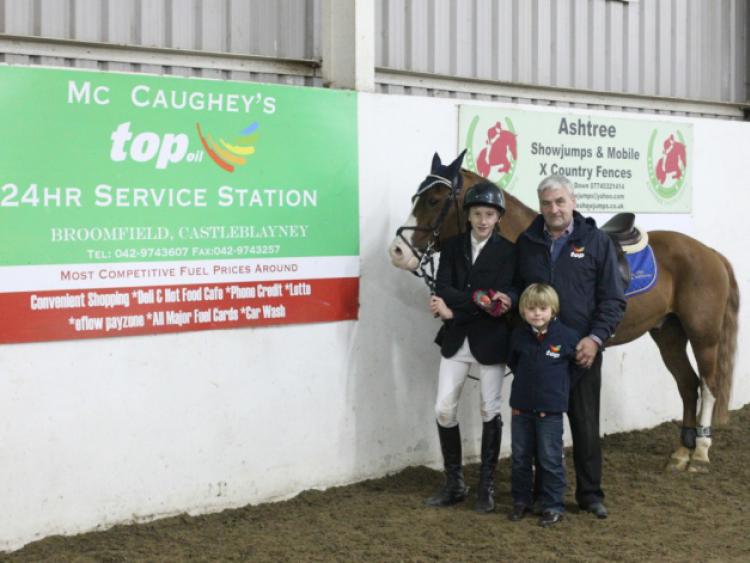 The main competitions were the three Grand Prix jump off events. First was the 128 1m Grand Prix, only one of the five x 128cm classes, sponsorship of which was organised by Damian McPhillips of Ballinod, Co Monaghan.

Out of 19 starters, 10 combinations managed to get through to the jump off.

Only three of these produced double clears, one of whom was Ruari Clarke on Lenamore Mini Metro but his fast time of 39.93secs failed to secure the red rosette which went to Emma McEntee on Star Spangled Banner who completed her round in an impressive time of 36.93secs.

Ruari ended up in 2nd place with seventh in Hugo McAlpine and Twilight Dancer executing a nice second clear round to take the 3rd placing.

The next Grand Prix event was the 138 1.10m. All the 138cm classes were sponsored by McCaughey Foods of Castleblaney.

The first and only double clear was provided by Olivia Roulston on Claggan Supreme. Olivia seen off all the competition with her time of 31.83secs, emerging the winner.

Last in, Beth Doherty on X Scream rose to the challenge set by Olivia and was unfortunate to have the last fence down although her time was just over a second slower than the winner.

Last event of the day, the 148 1.20m Grand Prix was sponsored by the McCaughey 24hr Service Station, Broomfield, Co Monaghan. The jump off produced six double clears. Second to go, Nickolas Farr on Cwmdwy fran noson Dywyll set the pace with a lovely clear in a brilliant time of 36.40secs.

Although Olivia Roulston on Sparkling Apache Gold did her utmost to beat Nikolas her excellent time of 37.23secs just wasn’t good enough to rob him off his 1st place but Olivia was happy to put yet another win under her belt.

Kernan Equestrian Centre wish to extend their sincere thanks to all their sponsors, including Short’s Bureau de Change, Crossmaglen, Douglas Sport Horses and all those taking part in the day’s competition.

A special thanks to John Chambers for officiating and helping to make this a very successful fixture in the equestrian calendar.