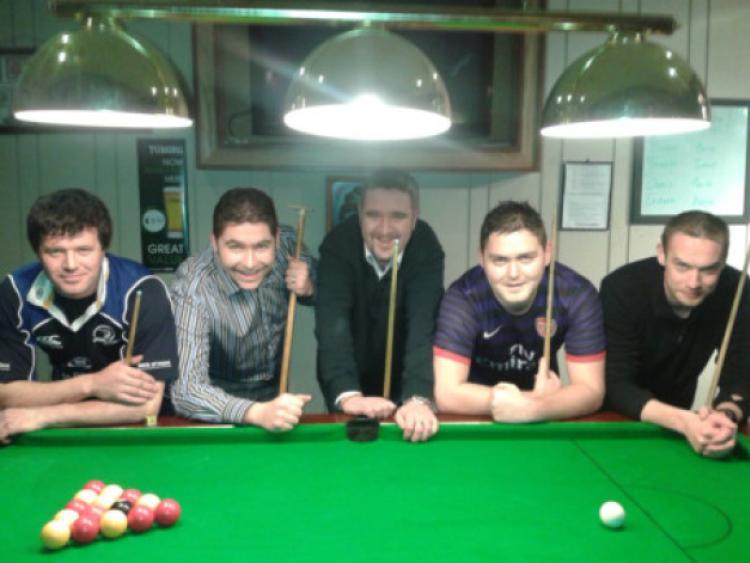 Last week’s big game in the Tuborg Dundalk Pool League Second Division was the top of the table clash between second placed Windmill Black and the leaders Jackie Murphy’s.

Last week’s big game in the Tuborg Dundalk Pool League Second Division was the top of the table clash between second placed Windmill Black and the leaders Jackie Murphy’s.

It was the leaders who started best when, in a tactical affair, Dermot Connolly beat Peter McCluskey 2-0, however, Windmill bounced straight back when the experienced Anthony Donegan beat Barry Soraghan 2-0 to level the match.

The third match featured Denise McArdle of the Windmill and Tommy O’Hare and when Tommy won the first frame things were looking good for the league leaders.

However Denise had other ideas and with some excellent potting she won the next two frames to win her match 2-1 and also put the Windmill 2-1 ahead. Windmill completed the victory when Chris Caulfield beat Martin Lambe 2-0.

The final match, between the Windmill captain Eamonn Farrell and Kevin Soraghan, was going to decide who got the bonus point and in a tense affair it was Kevin who held his nerve to win the game 2-1.

This left the final score 3-2 in favour of the Windmill, but unfortunately for them the bonus point that Jackie’s secured in the last match gives Jackie’s a one point lead going into the last round of league fixtures.

Also in the Second Division, Cluskey’s completed a 5-0 victory over Callan’s to boost their chances of making the play-offs. The winners for Cluskey’s were Declan Hillard, Cathal McKenna, Seamus Conroy, James King and Alan Meegan.

Sean’s Tavern entertained Castle Bar Baize and the teams divided the first four matches with Martin Hayes and Peter Kerr winning for Sean’s and Mattie Hoey and Benny McAleavey replying for the Baize.

The deciding match featured Don O’Brien from Sean’s and Tomas Geroc and in the end it was Tomas who won the match 2-1 to complete a 3-2 victory for Castle Bar Baize.

In the First Division, Avenue Inn Eagles consolidated their position as league leaders when they beat Windmill Red 4-1. The winners for the league leaders were Alan Thompson, Wayne Rogers, Graham Baitson and David Hanratty with Richard Keely the lone scorer for the Windmill.

Second placed Avenue Inn Rovers travelled to play Castle Bar Traders and the Rovers had the victory completed after three games with wins for Aidan Kinsella, Stephen Gorham and Pat Brady. The Traders responded to win the last two matches with victories for Tiernan Mallon and Liam Johnston and this enabled them to get a bonus point.