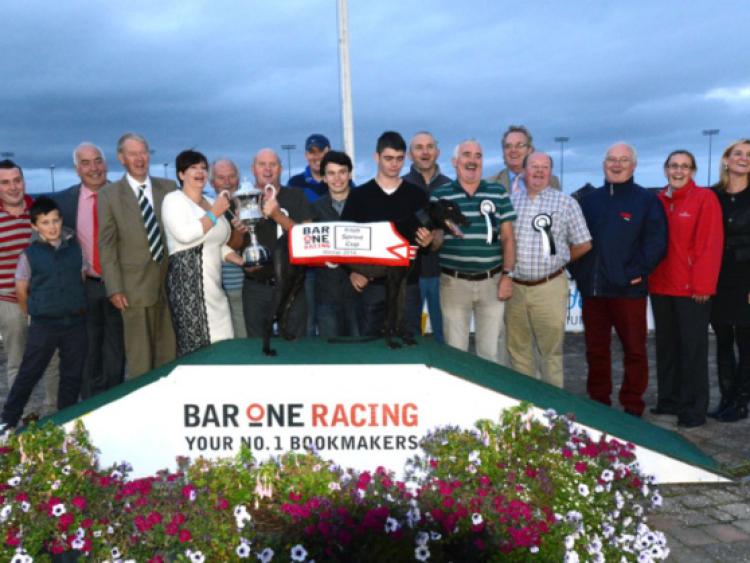 Crokers Champ, winner of a thrilling Bar-One Racing Irish Sprint Cup final at Dundalk on Sunday night, has next year’s English Derby as his main objective.

Crokers Champ, winner of a thrilling Bar-One Racing Irish Sprint Cup final at Dundalk on Sunday night, has next year’s English Derby as his main objective.

In the meantime, the Waterford-owned and -trained champion is to aimed at either the Masters at his home track or the Laurels in Cork, before taking in the Night Of The Stars at Shelbourne Park in early December.

Taking time to get used to the Dowdallshill circuit, Peter Cronin’s charge failed to register in the opening two rounds of the Sprint Cup, but then showed his true worth, winning his quarter- and semi-final in emphatic fashion.

Good as the Kinloch Brae dog was in each of those two runs, he was even better when he needed to be, edging out the Swords challenger, Walshes Hill, in a decider that went to a photo-finish. A half-length was the dividing margin, with the favourite, the always-prominent Crown Champ, a further two-and-a-half lengths back in third.

Neither of the locally-connected finalists, Drumsna Turbo nor Corduff Flame, each of them making slow start, while the rank outsider, Caribbean Dancer, failed to finish, the result of having picked up an injury.

While there was obvious delight among the winner’s connections, Marie and Des Gilbert couldn’t disguise their disappointment. Walshes Hill, which they train for Co Kildare owner, Aidan Comerford, looked as assured winner having bolted from traps to hold a substantial lead at the first turn and still be in front facing up to the line.

But in the crucial last few yards, Walshes Hill surrendered the lead to deny the Gilberts victory for the second time in five years. Back in 2009 they guided Aho Tony through to the final, only to see the odds-on shot fail to fire in a race won by Inny Blue.

Crokers Champ was winning a big prize out of turn. Having run-up to the fast but ill-fated Boylesports Hero in the final of the valuable Kirby Memorial Stake at Limerick, he challenged for the English Derby, and running a succession of fine races made it to the final.

A swift break from the inside trap, had the April ‘11 whelping in front for most of the journey, but as happened in Sunday’s final, the lead changed hands right at the death, this time Crokers being denied, taking third a half-length off the surprise winner, Salad Dodger.

Victory brought up a quick and valuable Dowdallshill double for trainer Cronin, as it was only last month when he guided Metro Jack to victory in the Matthews.ie International,

There were five finals on the Sprint Cup supporting card, with three of them going to local kennels. After Ni Dar battled his way to victory for Castleblayney trainer, Catherine Kerr, in the Cuchulainn Crystal 525, Pairctobair Amy couldn’t have picked a better time to open her account, the Toger-based Michael Doyle and Thomas Butterly-owned tracker coming with a late run to touch off the luckless Glow Dubh, owned by David Dunne, from Dromiskin.

Then in the concluding event, the AV Direct 550 final, Bit Of Berlin had the Haggardstown lads and lassies shouting loudly as he strode out for an all-the-way win. Owned in partnership by Senator Jim D’Arcy and the dog’s trainer, Stephen Thornton, Bit Of berlin has been the essence of consistency, winning nine times over a variety of distances.