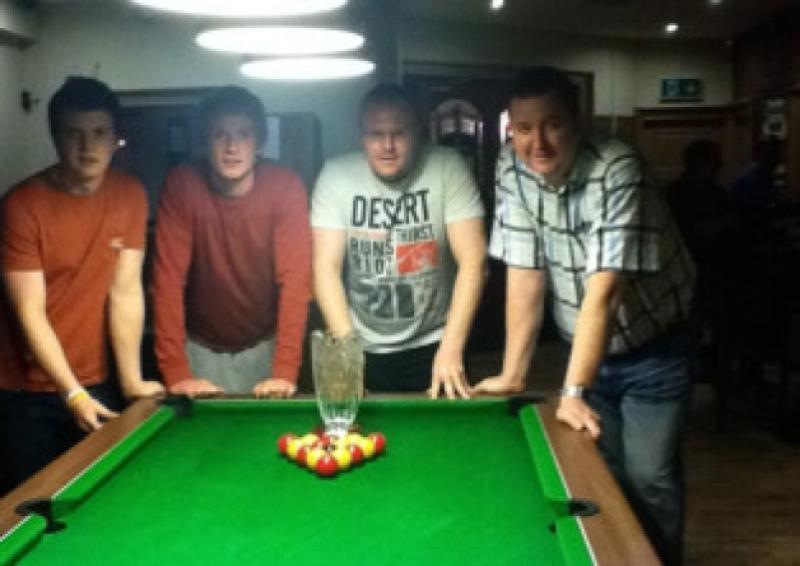 The big game this week in the Dundalk pool league sponsored by Bavaria was the eagerly awaited individuals final between the defending champion Pat Brady (Avenue Inn) and Wayne Rogers (Harrison’s).

The big game this week in the Dundalk pool league sponsored by Bavaria was the eagerly awaited individuals final between the defending champion Pat Brady (Avenue Inn) and Wayne Rogers (Harrison’s).

The first two frames were tactical affairs with Wayne winning the first and Pat the second frame. Wayne then produced a brilliant 6 ball finish to take the third frame and lead 2-1 in the match; however this lead was short-lived as Pat responded with a classy 5 ball finish to level the match at 2-2. In the next two frames clinical snookers from Pat enabled him to take both frames and he was now 4-2 ahead.

In the next frame Wayne potted his 7 colours with ease only and then uncharacteristically he missed an easy black to the centre pocket, Pat seized on this opportunity to win this frame and now lead 5-2.

In frame 10 Pat produced a stylish clearance to now lead 6-4 and he now only required one frame to retain the title.

In the next frame Pat broke and the cue ball went in off and Wayne coolly cleared the table to now trail 6-5. The scores were soon tied at 6-6 when Wayne produced a stunning finish in frame 12 to send the match to a deciding frame. In the decider Pat broke and potted his 7 colours only to snooker himself on the black ball and unfortunately for him he hit the black and knocked it safe.

Wayne then laid a very good snooker which resulted in him getting 2 shots and he now looked destined to win the title. On his second last ball he ran out of position and he was unable to pot his last ball, Pat now had another chance.

Pat replied by laying a snooker which Wayne successfully got out of, Pat then rolled up to the black ball with his next shot leaving Wayne a difficult pot on his last ball and unfortunately for Wayne in attempting the pot the white ball went in off.

This left Pat with the simple task of rolling the black ball into the pocket to record a thrilling 7-6 victory and thus retains his title.

The following night the final of the doubles was played between Brendan Traynor/Des Reenan (Harrison’s) and Stephen Gorham/Pat Brady (Avenue Inn). In a match that the pool was off a very high standard it seemed very hard to predict the winner.

In the deciding frame Brendan broke and one by one he and Des potted all of their balls and Des was left with the simple task of potting the black ball in the corner to win the match 5-4 and with it the Dundalk pairs title.