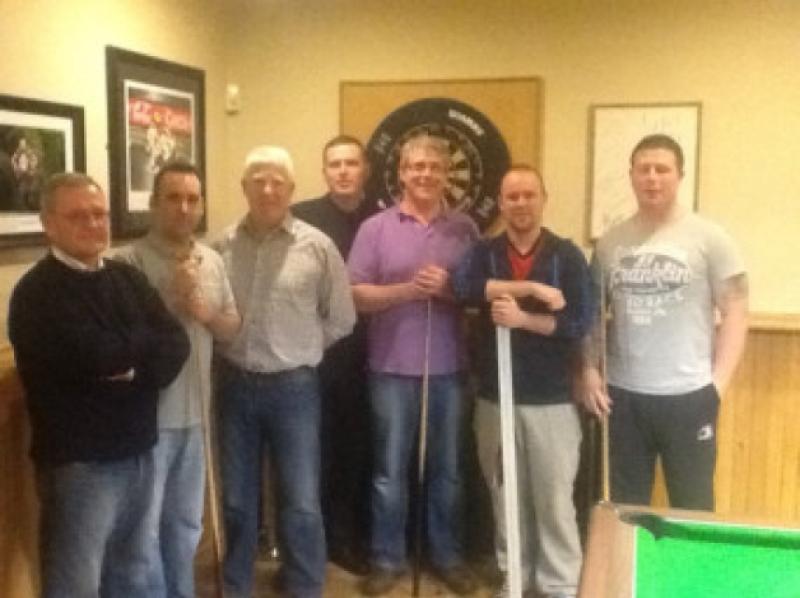 It was the Traders who started best when Ciaran Sheridan took the first frame against John Dugdale but John bounced back to win the next two frames to give Rovers a 1-0 lead.

The next match featured Aidan Kinsella (Avenue) against Stephen McBride and it was Aidan who capitalised on mistakes by Stephen to win his match 2-0 and give the Avenue a 2-0 lead.

Match three featured Avenue captain Pat Brady against Liam Johnston and some clinical potting from Pat ensured a 2-0 win to give the Avenue a 3-0 lead.

Tiernan Mallon gave the Traders a chance of a bonus point when he beat a disappointing John Browne 2-0 to leave the overall score 3-1 in favour of the Avenue. In the final match it was the Avenue who got the bonus point when Stephen Gorham returned to form to beat Mark Connolly 2-0.

League leaders Avenue Inn Eagles travelled to the Windmill to play their Red team and they overcame an early scare when Gussy Hearty won the first frame against Wayne Rogers before Wayne then took control of the match and won the next two frames to put the Eagles 1-0 ahead and this lead was doubled when Graham Baitson beat Richard Keeley 2-0.

The next match featured the two captains, Windmill’s Tony Bellew against Des Reenan and it was Tony who took the first frame. However Des bounced back to win the next two and put the Eagles 3-0 ahead and they were soon 4-0 ahead when Jimmy Reenan defeated Henry Boyle 2-1.

Experienced Victor Murray got a consolation for the Windmill in the last match when he beat Conor McDonnell 2-1 to leave the final score 4-1 in favour of the Eagles.

The Second Division saw Sean’s Tavern travel to the Castle Bar to play their Baize team and it was the away team who started best when Peter Kerr beat Tomas Geroc 2-1 but the scores were soon level when Mattie Hoey beat Pajo O’Hare 2-0.

Unfortunately for the home team this was to be their last success as Martin Hayes, Pat Jackson and Don O’Brien all rattled of victories for Sean’s Tavern. This 4-1 victory for Sean’s Tavern moves them up to third in the table.