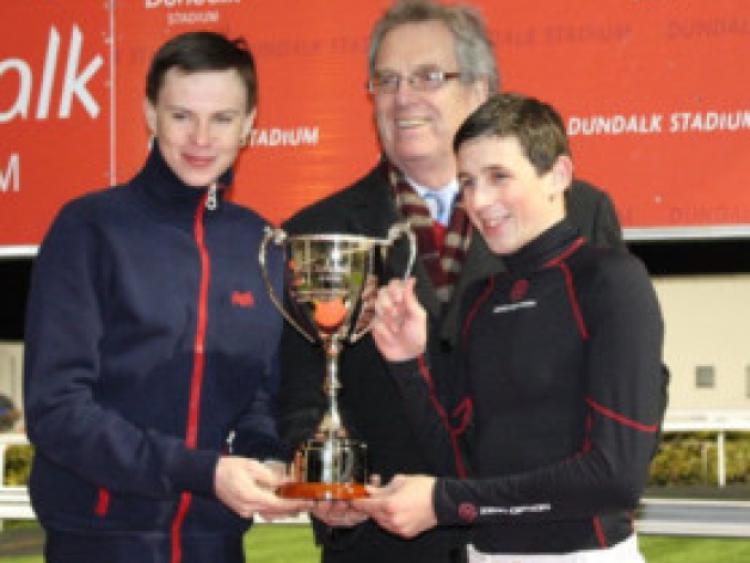 CP Hoban’s win in the 7.45 Crowne Plaza Hotel Race & Stay Handicap on the night took him him neck and neck with JP O’Brien on 15 wins apiece.

It was all dependent on the outcome of the last race where Conor came an enticingly close second leaving both jockeys as joint champions of the season.

“It was an exciting finish between Conor and Joseph, they kept us on the edge of our seats up to the very last moment. We wish both of them and Michael a big congratulations and we will be making a charitable donation in their name to their chosen charities as part of the awards”, commented Jean Clerkin, Sales & Marketing Executive, Dundalk Stadium.

Elsewhere, Jamie Spencer’s rare visit to Dundalk just failed to pay a dividend when Jocular was narrowly beaten in the Dundalk Stadium Light Up Your Night Median Auction Maiden.

Johnny Murtagh’s colt, sent off the 4-6 favourite in the Qatar Racing colours, held every chance in a three-way battle coming down the straight, but was beaten a neck by Bint Dandy.

Paul Deegan’s 3-1 shot caught the eye when a promising third on her debut at the track last month and she was always doing just about enough after she slipped through on the inside under Chris Hayes.

Little Arrows dug deep to land just the second victory of his 20-race all-weather career, but his seventh in all, with an all-the-way success in the Dundalk Stadium Winter Series Awards Rated Race.

Shane Foley set just a steady pace and the Ken Condon-trained eight-year-old (9-1) found plenty for pressure in the straight to hold the persistent challenge of Sharjah by a head.

Fergal Lynch got a good tune out of Iron Major to win the Dundalk Stadium Racecourse Of The Year Rated Race, holding up Eddie Lynam’s 7-1 shot until the final furlong before thrusting him through a gap to beat Strait Of Zanzibar by half a length.

Mick Halford confirmed his position as top trainer in the winter series when 11-8 favourite Political Policy gained his revenge on Fix It, winning by a length in the Crowne Plaza Hotel Dundalk Race & Stay Package Handicap under Conor Hoban.

There was a tight finish to the Champions Restaurant At Dundalk Stadium Handicap and it went to Andy Slattery’s 2-1 favourite Merry Mast, who hit the front half a furlong out in the hands of Billy Lee and held off Amazing Star by a head.

Doux Douce made a brave attempt to lead all the way in the Easter Mid-Term Madness At Dundalk Handicap but was collared close home and beaten three-quarters of a length by Garry Caldwell’s 66-1 shot Zambezi Tiger under Ross Coakley.