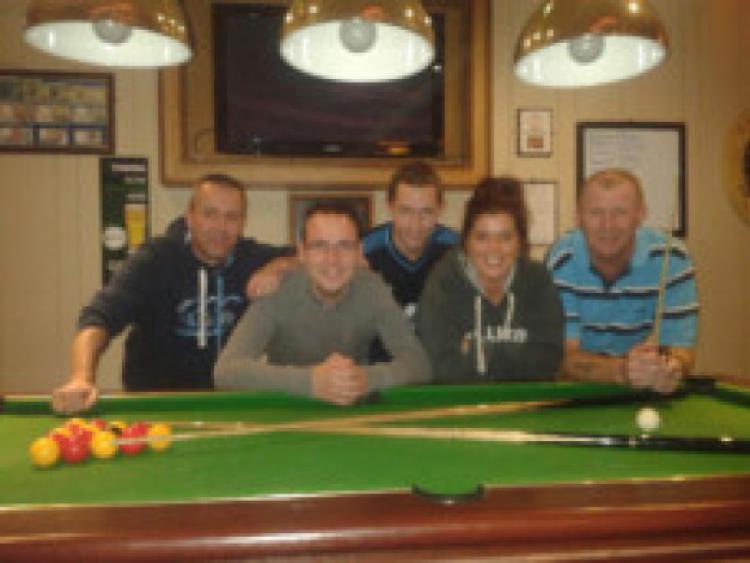 It was a big week for title contenders Harrison’s Blue in the Tuborg Dundalk Pool League last week as they had two matches to play.

It was a big week for title contenders Harrison’s Blue in the Tuborg Dundalk Pool League last week as they had two matches to play.

On Monday they had home advantage against Avenue Inn Rovers and they started best when Ciaran Renaghan beat Declan Brady 2-1, however the Avenue bounced straight back when Pat Brady beat Paul McQuillan 2-1 to level the match.

At this stage the match could have went either way and next up was Mick Conlon of Harrison’s against Joe Lee and the big occasion seemed to get to both players as they were making uncharacteristic mistakes. In the end it was a fluke on the black by Joe in the deciding frame that now put the Avenue 2-1 ahead in the match.

The match was soon level when Paul Kearney - with some outstanding potting - brushed Stephen Gorham twice. The game was now going to a decider between Kieran Grimes of Harrison’s and John Browne and as both players swapped frames the tension was rising as the match now went to a deciding frame.

As both players made mistakes it was John who eventually held his nerve to win the deciding frame for the Avenue.

On Tuesday night Harrison’s travelled into town to play Castle Bar Traders and they got back to winning ways when they defeated the home team 3-2 in a very exciting match. This win put Harrison’s joint top of the table with a game more played.

In the Second Division Castle Bar Baize travelled out to play the Lumper’s and they recorded an excellent 3-2 victory over the home side. Benny McAleavey, Tomas Geroc and team captain Shane Dillon all recorded victories for the Castle Bar while Nathan Lambe and Ciaran Keenan won for the Lumper’s.

League leaders Jackie Murphy’s recorded another excellent victory when they won 4-1 away to the Avenue Inn Swifts. They won the first four games with victories for Dermot Connolly, Martin Lambe, Barry Soraghan and Kevin Soraghan while Jason McConville recorded his first ever league win when he defeated Tommy O’Hare in the last match.