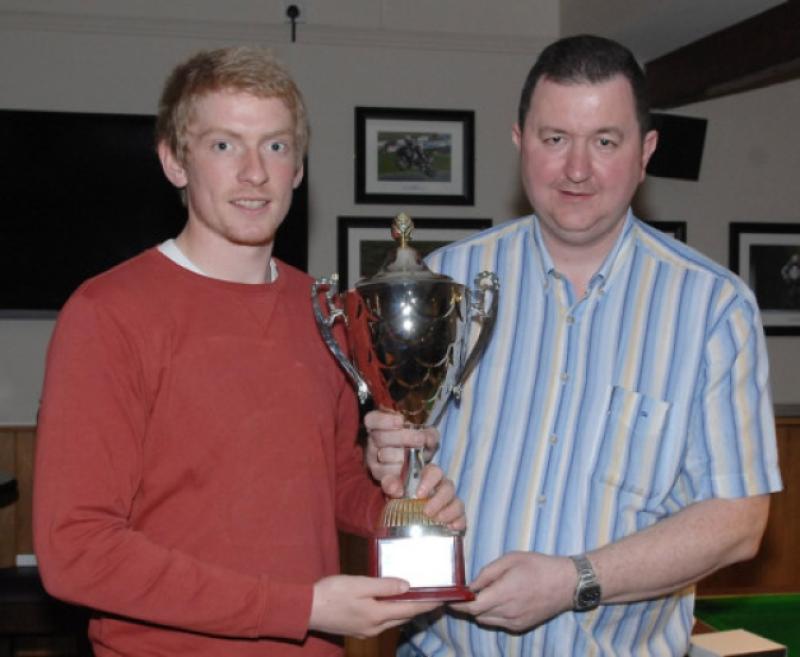 The first match was between Harrison’s Brendan Traynor and John Dugdale and it was John who punished a mistake by Brendan to take a 1-0 lead.

In the second frame, this time it was a mistake by John and Brendan cleared the table to level the scores at 1-1.

In the third frame it was John who got first chance and he made no mistake with a brilliant eight ball clearance to win his match 2-1 and give the Avenue Inn a 1-0 lead.

The second match featured the returning Jimmy Reenan for Harrison’s and the current individual champion, Pat Brady, for the Avenue Inn.

In both frames Pat waited for Jimmy to make a mistake and both times Pat cleared the table to win his match 2-0 and give the Avenue Inn a 2-0 lead.

The third match featured Harrison’s Wayne Rogers and Declan Brady and it was Wayne who was quickly into stride when he broke and cleared the table in the first frame.

In the second frame, when Declan missed an easy pot, Wayne seized the opportunity to win the frame and leave the overall score now 2-1 in favour of the Avenue Inn.

The fourth match pitted the Harrison’s captain, Des Reenan, against Stephen Gorham and it was Des who capitalised on a bad mistake by Stephen to take the first frame.

Stephen quickly made amends for this error when he broke and cleared the table in the next frame to level his match and in the deciding frame it was Gorham who got the first chance and despite a bad miscue he produced a magnificent clearance to clinch the cup for the Avenue Inn and thus deny Harrison’s the league and cup double.

After the match the trophies for the season were presented to the various winners and runners-up. The league would also like to thank Bavaria for their continued sponsorship of the league and the Dundalk Democrat for their coverage throughout the season.

The Dundalk Pool League would also like to wish all the best to their players who are competing in the All Ireland Pool finals in Limerick next weekend.