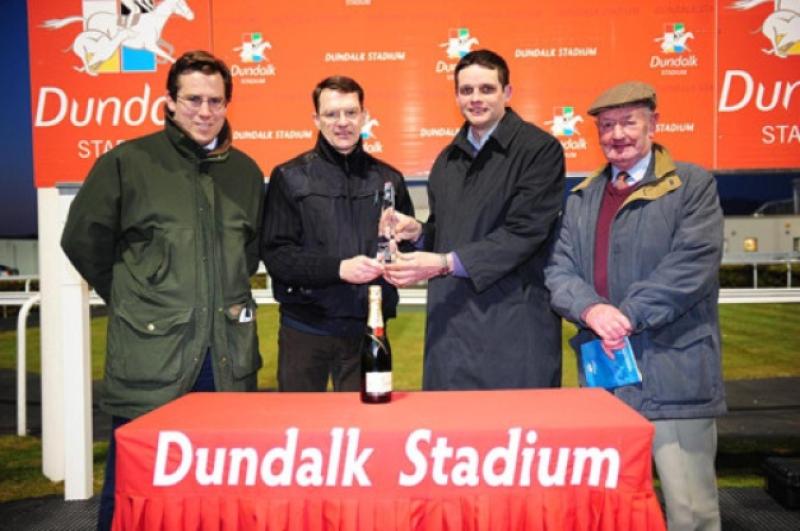 Drumsna Messi was the outstanding performer in the Land Of Legends 525 quarter-finals at Dundalk Stadium over the weekend.

Drumsna Messi was the outstanding performer in the Land Of Legends 525 quarter-finals at Dundalk Stadium over the weekend.

Maintaining a fine recent-week winning sequence, the son of Crash clocked in with a 28.85, fastest time in the competition to date.

Twinkle-toed like his namesake, the May pup - owned by Meath TD Ray Butler in partnership with Larry Costelloe, and trained by Martin Lanney – gave Parnell Jack a start, but hadn’t to wait long before taking charge.

Now a winner of five from 8, he went on early in the back straight, and at the third bend had the lead from the improving Bit Of Action and Parnell Jack. The order remained the same, Drumsna winning by three-and-a-half lengths, with Parnell Jack finishing two lengths off the Stephen Thornton-owned Bit Of Action and Screen Queen running on to take fourth.

Dryland Shadow showed excellent back-straight pace to win the second quarter-final. Declan Byrne’srunner, based at Rockmarshal, was well enough away from one, but was still only third turning into the back behind Manilla Breeze and Rathduff Rachael.

He moved into overdrive after that, and after finding a way past the two in front, went on to score by just under two lengths in a career-best 29.08.

Rathduff Rachael, owned by Togher’s Michael Doyle, ran a fine race from an unfavourable trap six draw to take second, a half-length clear of Manilla Breeze. Neon Flash was the other one to advance to Saturday night’s semi-finals.

Manilla Lemon’s six previous wins were won from the front, but in taking the third qualifier, Mark Cahill’s Newry runner came from behind.

The Droopys Scolari bitch led Sigma Sophie until the third bend. When she relinquished the lead at this point to the fast improving Tomdabarker, second place was as much as her connections could hope for. However, there was another run in the 62-pounder, and gaining with every stride in the homer straight she got up to win by a neck in 29.01.

The draw for Saturday night resulted...

Dromiskin’s David Dunne scored with his Dowdallshil debutant, Point Of Sale, on Saturday night, the former Kilkenny tracker making all of the running in a 400 to win by eight lengths in a smart time of 21.71.

And on the same night, Colm Farrelly made is mad dash back from Shelbourne Park, where he had three runners, to see his Mellow Magic take the concluding 525. This was another post-to-pillar winner, the home-bred holding out for a half-length win from Battle Speed.