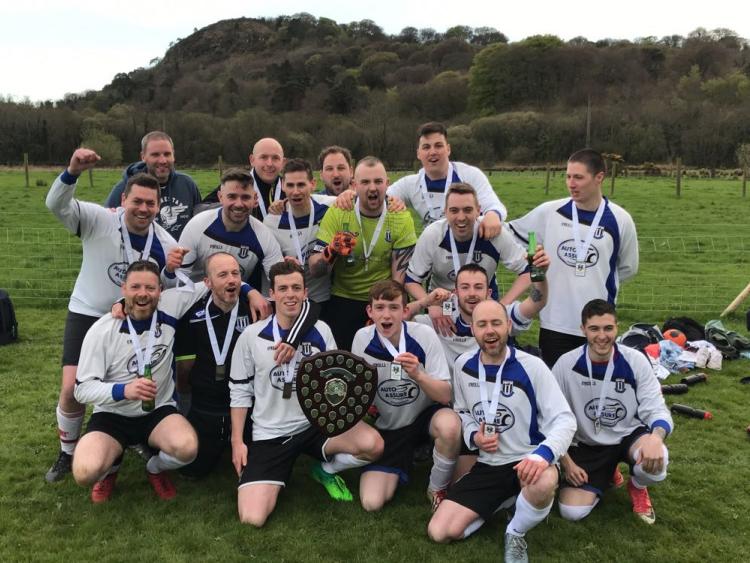 The victorious Rampart Celtic side after Saturday's final win

In a tense tussle between the sides, Rampart Celtic had looked down and out with the regulation 90 minutes almost up, but a last minute penalty, converted by Fra McCann, drew them level at 4-4 and ultimately set the town team up for shoot-out glory following the conclusion of extra time.

And it was that man again - Fra McCann - who would eventually seal the title for Rampart Celtic with the winning penalty in the shoot-out.

Rampart Celtic had enjoyed the majority of early possession which resulted in a perfectly weighted through ball to that man Fra McCann, who slotted home to take an early lead in the 9th minute.

Glen United sparked into life and took charge of the game responding with two goals in quick succession from Rowan Cull and Philly Martin to take a 2-1 lead into the half time break.

Rampart Celtic were roused by a scalding half time team talk and quickly squared the game with a wonder effort from Brendan McGuiness.

Glen United were quick to reply and a long range effort from Ray Steele caught Rampart's goalkeeper Aaron Conway off guard and sneaked under the crossbar to make it 3-2.

Glen United were spurred on and soon added another goal to make it 4-2. Some substitutions and tactical changes were made on both sides including the introduction of Alan Wilson, Aaron Byrne and Ryan Duffy for Ramparts Celtic.

The introduction of the ‘fresh legs’ and change in formation gave some freedom to Ramparts Midfield and with 7 minutes of normal time remaining Fra McCann found Brendan McGuiness on the edge of area who sneaked the ball past the oncoming Glen United keeper Danny Watters. Ramparts pushed on in search of the equalizer, with Ger Redmond inching a shot agonizingly wide in the second last minute.

With the last minute of normal time ticking away Brendan McGuiness found himself Bundled over in the box and referee Micky Clarke awarded a penalty which was calmly finished by Fra McCann.

Both teams battled through the five minutes of additional time searching for the winning goal which wasn’t to be found. 4-4 full time score and the lottery of penalties was called upon to decide the winner of this year’s final, after a fair and well contested game.

Rampart's Keeper Aaron Conway saved two penalties with Danny Watters saved one (and get a good hand to another), but Rampart Celtic ultimately emerged victorious to claim this year’s Shield.

Congrats to both teams on a fantastic final which was a wonderful showpiece of the standard of football on show in the North Louth Football League.