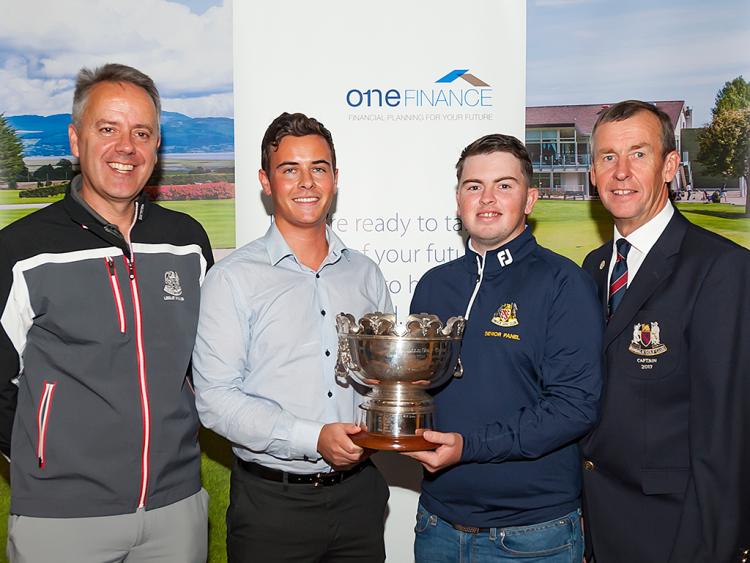 Pictured at the launch of the 2017 Dundalk Scratch Cup sponsored by One Finance were (from left): Leslie Walker (Club Professional), Niall McDonnell (One Finance), Caolan Rafferty (Current Holder) and

A top class field has been assembled for the One Finance sponsored Dundalk Scratch Cup which takes place this Sunday (September 17) over 36 holes at Dundalk Golf Club.

It includes a host of top players including the recent winner of the Irish Close Championship Jamie Fletcher from Warrenpoint and the player he beat in the final, Athenry teenager David Kitt,

Tiarnan McLarnon, who partnered Rafferty to success in Colombia last week, is also in the high-quality field along with the likes of Colm Campbell, Jack Doherty, Aaron Marshall, Ross Kelly Eugene Smith and Geoff Lenehan.

The greenkeeping staff at the Dundalk have been working hard over the last few weeks to have the course in top shape for Sunday and club professional Leslie Walker believes that the course record of 64, which was recently set by Grant, could be under threat.

“With the quality of the field and the course set-up, I’m looking forward to a low-scoring event and I think it will be a great opportunity to see some of the top amateur players in action,” said Walker.

Rafferty, who is the defending champion, says he would love to retain his title after an amazing season which has seen him win the silver medal for leading qualifier at the British Amateur and North of Ireland Championships as well as helping Ireland to victory in the Home Internationals and the Copa Fedegolf in Colombia where he also won the individual event.

“It was a big breakthrough for me last year when I won it and I am delighted that I kicked-on after that. I’d love to retain the title but I know that it’s not going to be easy looking at the quality of the field. Hopefully local knowledge will count for something!” said Rafferty who will spend this week playing for Maynooth University at the European University Championships in Prague.

This year’s event has a new sponsor in One Finance and Club Captain Mickey Coburn said it is great to have them on board.

“We are delighted to welcome on board One Finance as the new sponsors of the Scratch Cup and look forward to working with them to consolidate the competition’s status as one of the top 36 hole senior scratch cups in Ireland.

The Dundalk Scratch Cup commenced in 1963 when it was won by David Sheahan and previous champions include three-times Major winner and European Ryder Cup player Padraig Harrington.