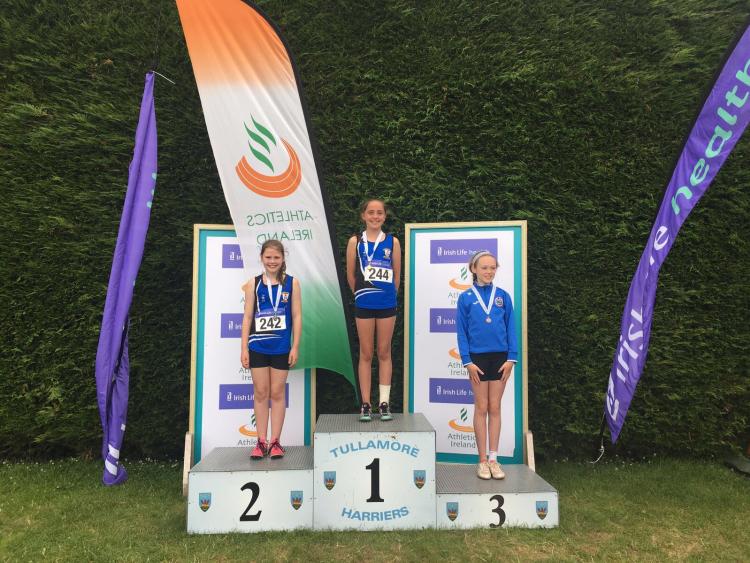 Niamh Brady and Judith Bell on podium U13 LJ

At the National Juvenile Track and Field Championship at Tullamore this week-end, Israel Olatunde continued his fine performances on the track by taking second place and the silver medal in the Under 16 Boys 200 metres. This is a wonderful achievement, as Israel only made his debut on the track at this year’s Louth Juvenile Championships in May. He had been unfortunate in the Leinster Juvenile Championships to be disqualified in the 100 metres Final for a false start, especially as he had been the fastest qualifier in the earlier heats.

At the recent Louth Senior, U20 & Masters’ Track & Field Championships at the Lourdes Stadium, the club was represented in the various age groups. In the U20 events, Moses Opebi  finished 2nd in the 100m, 200m and long jump and Ist in the Shot.  Jonathan Rice (just home from holidays in the U.S.A. that morning) finished 6th in the 200m and 3rd in the long jump. Edward Clarke finished 5th in the 100m. 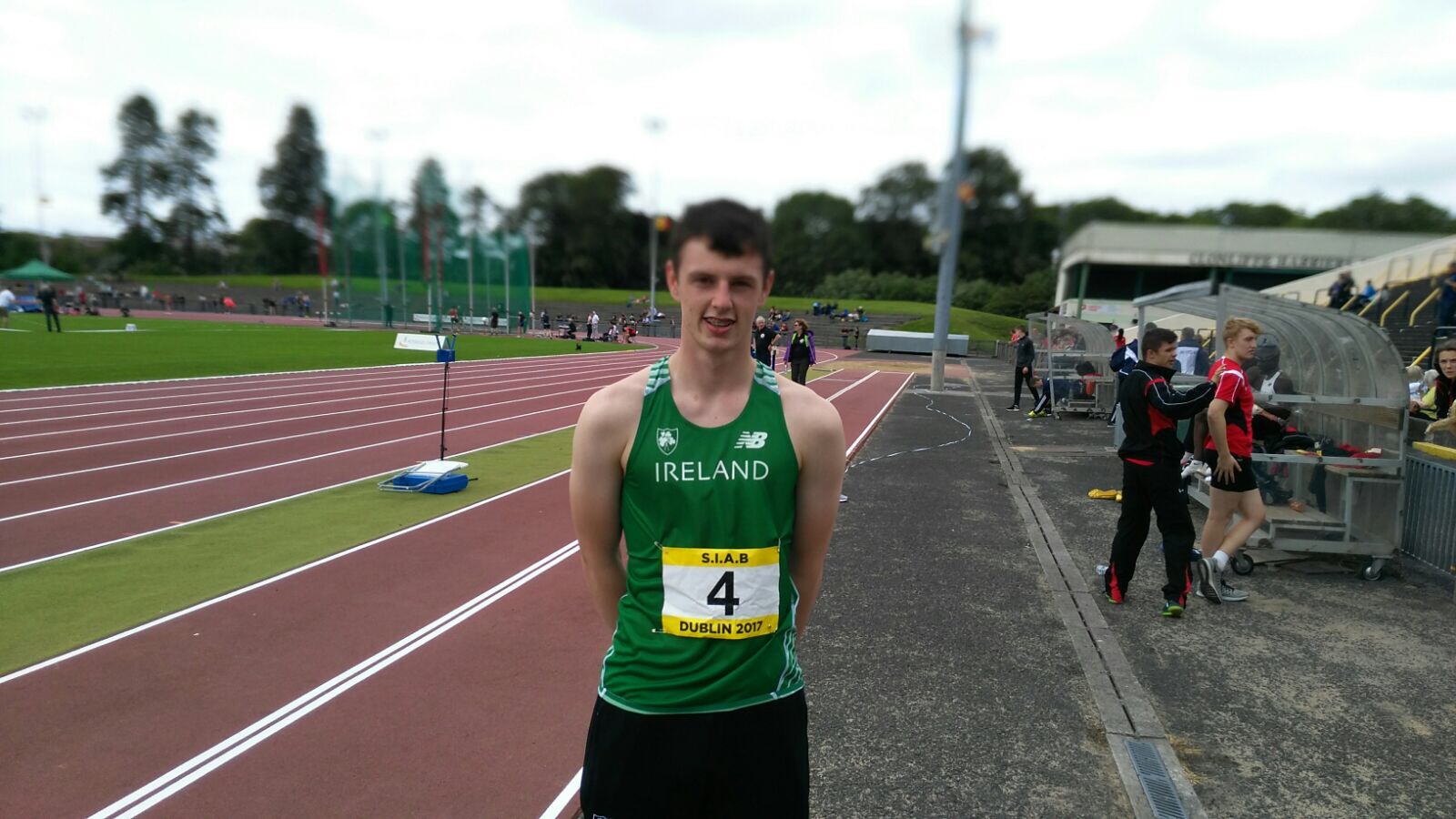 In the Senior Mens’, Samuel Fasan made a return to the track with a 2nd in the 100m and 2nd in the 200m, as well as !st in the long jump and Shot.  Our Senior Lady, Emma Conway was 1st in Shot and Javelin, continuing to improve with each outing.  Gerry McArdle (Masters’) finished off a successful night for the Club with 1st in the 100m, 2nd in the 200m and 1st in the Shot.

A fantastic weekend for the Saint Peter's AC at both Morton Stadium Santry and Tullamore Harriers . Gabriel Bell made his international debut when he represented the Irish Schools at the SIAB international schools meet on Saturday.

This was a higher level than Gabriel would have competed at before but that didn't deter this fine young athlete as he produced his best ever performance as he leaped to a new PB of 6.64M. 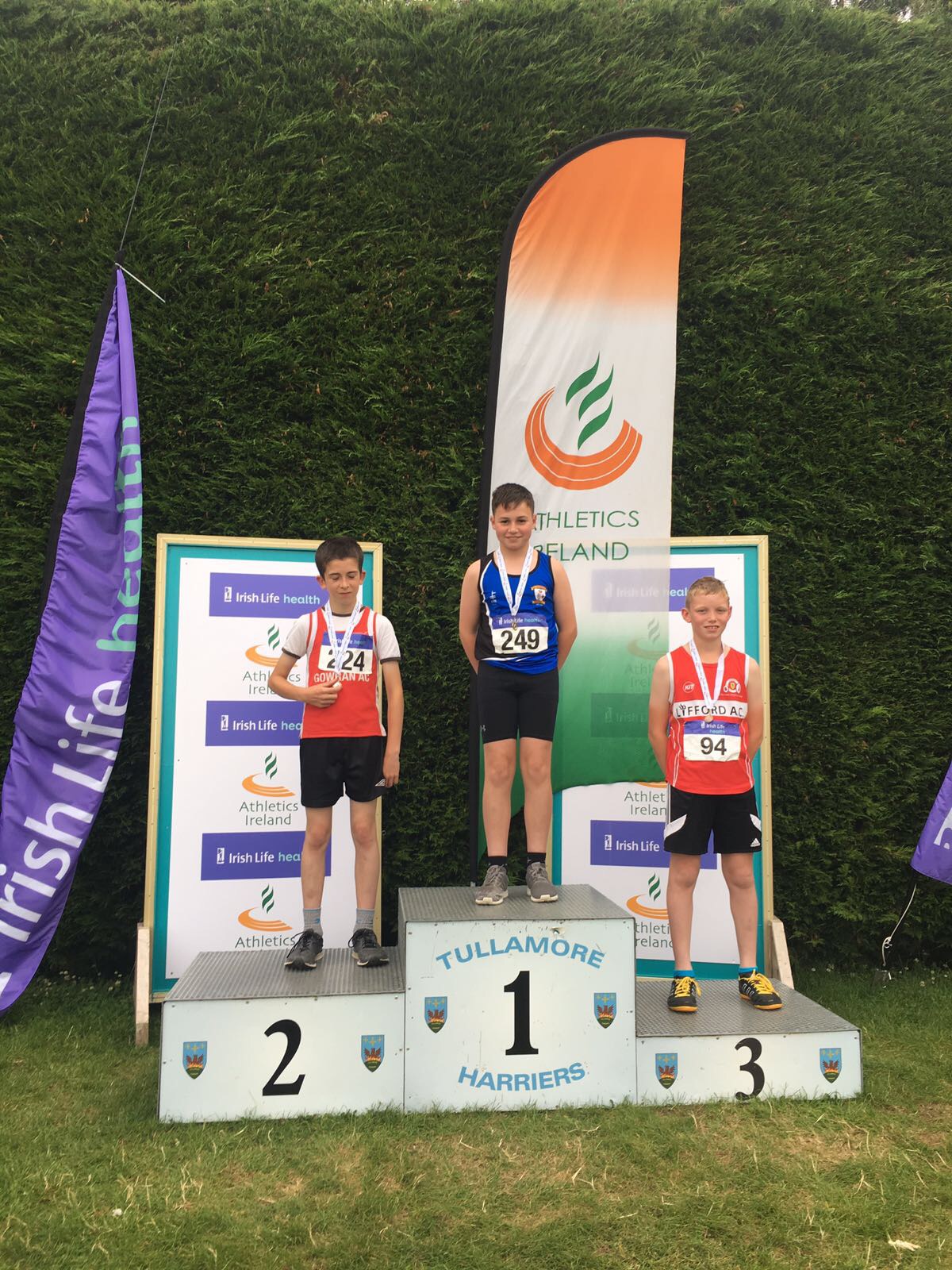 As Gabriel was wearing the Irish singlet with pride some of his club mates were doing their club proud at national B Championships in Tullamore. The highlight from a club point of view was the girls under 13 Long jump were two Saint Peter's athletes occupied the top two positions on the podium.

Niamh Brady was on top of the podium with a leap of 4.22M and beside her in 2nd place was her training buddy Judith Bell who also performed well with a jump of 3.98M. Dean Murtagh who is making fantastic progress at his Shot Putt technique got his rewards for his dedication to this event when he threw 9.36M to win gold in the 13 competition.

Both Lucy Brennan and Isabeal Fitzpatrick enjoy fantastic success in the under 12 Long Jump and high jump competitions respectively, Lucy leaped to a new PB of 3.93M to win silver and Isabeal jumped 1.15M to also claim a silver medal in the high jump. Julie Mc Laughlin produced a good performance in the girls under 13 600M and although Julie finished 2nd in her race the heats were done on time so the end result had her finishing in fifth but Julie can take satisfaction in Getting a new PB of 1.50.

Rory McLoughlin was unlucky not to medal in the boys under 14 80m sprint when he finished in fourth place. Lucy Smyth had a good performance in the under 13 80M sprint and Sean Allen completed the Saint Peter's Club representation when he competed in the under 13 Long jump.

Club veterans Andrew and Brendan Rogers were in action in the annual Dunleer four mile and both enjoyed success with Andrew winning the men's over sixty and his younger brother Brendan winning second place in the men's over 55.

Another athlete who has recently returned from traveling who also ran in Dunleer was Niamh Fussey and it is hoped that Niamh will make a return to the Blue and Black singlet in the not to distance future.