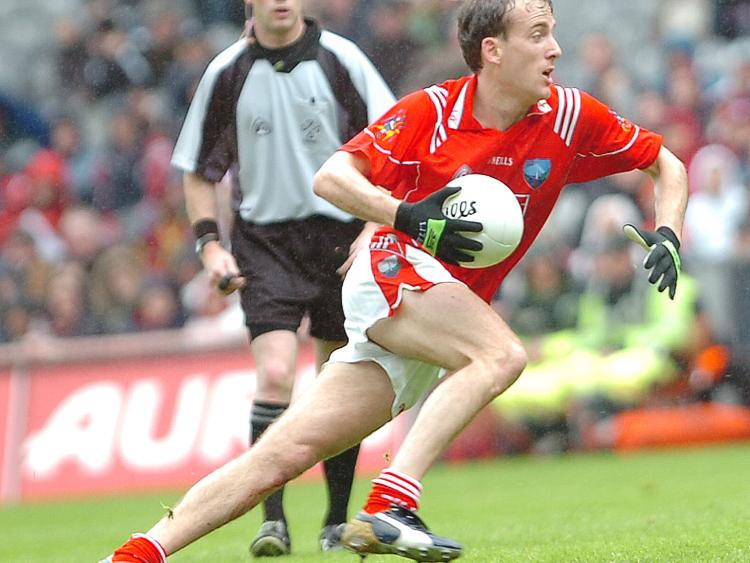 Nicky McDonnell in action against Wicklow in 2007 (Pic: Arthur Kinahan)

“It was in the last few minutes and it definitely went inside the post, and it would have won us the game.”

The indelible memory of Nicky McDonnell’s Louth career is ultimately his crucial goal in the replay of Louth’s Leinster Championship game with Wicklow in 2007.

McDonnell came on as a second-half substitute at Parnell Park on that sunny afternoon and blasted to the net to get Louth a third crack at the Garden County late in extra-time.

And, while for many it was his goal that stood out, it’s the disputed point at the end which still troubles the ardent Naomh Máirtín clubman.

“In a funny way, I think we should have won that game because after I scored the goal I took a shot from 30m or 40m and it 100% went over. I was straight in-line with it,” McDonnell told the Dundalk Democrat.

“It was in the last few minutes and it definitely went inside the post, and it would have won us the game, but the umpire and referee waved it wide so after the game I was more annoyed with them than anything.

“It just turned out to be one of those things though. They hadn’t got Hawkeye back then, although it’s still not in Parnell Park now,” McDonnell said curiously, as if to say that could have an impact on Sunday.

His goal in that 1-9 to 0-12 stalemate was crucial and ultimately saved both Louth's and manager Eamonn McEneaney’s blushes, after all Wicklow were lowly ranked, despite Mick O’Dwyer having taken the reigns, while the Reds were only after being relegated from Division 1B.

McDonnell can vividly recall his goal, but dismisses the quip that Louth underestimated Wicklow prior to their first meeting at Croke Park, which saw a late goal from Ronan Carroll get the Reds out of jail.

“The ball just broke towards me and my first instinct was to have a crack at it and lucky enough in.

“Plus, it came off my weaker foot as well, which was nice,” McDonnell joked.

“At the time, Wicklow were decent with Mick O’Dwyer as manager and they had some excellent players like Leighton Glynn, James Stafford and Tony Hannon.

“It’s not as if we were looking beyond Wicklow or thinking that we were going to breeze past them, not by any stretch of the imagination.

“I know in the last game we beat them well but the first day we were lucky to get out with a draw.

“We wouldn’t have been taking Wicklow lightly then but I suppose Wicklow are in a completely different place now than where Mick O’Dwyer had them and I’d be very confident of Louth beating them.

“I wouldn’t even be surprised if Louth beat them well because Wicklow, going by the league, are the second worst team in the country.

“Back in 2007, it was a bit different. There couldn’t be any fear factor for Louth going in against Wicklow now after back-to-back promotions” McDonnell added.

Parnell Park is again the backdrop for Louth in the Leinster Championship, a ground which McDonnell has fond memories of for aforementioned reasons, and he’s looking forward to the atmosphere the north-Dublin venue will provide.

“I think it could be an advantage. Going as a supporter, I don’t really mind if the game is in Parnell Park or Croke Park,” the 37-year-old continued.

“I know that may sound a bit strange but when you come out in Parnell Park and it’s full, there’s going to be that kind of championship feeling whereas a Croke Park where it’s pretty empty, there’s not much atmosphere.

“I remember the first day I played in Croke Park, against Wicklow in 2003, and I got out onto the pitch with all these aspirations of playing on the biggest stage.

“But, you arrive out onto the pitch and there’s nobody there and it’s like the most eerie feeling ever, whereas I remember playing against Cavan in Navan in 2003 and the atmosphere was unbelievable because Páirc Tailteann was full.

“Championship games do have a better feel in regional grounds where the crowd and pitch are more compact,” McDonnell said.

Ultimately, Nicky is confident of a Louth victory and is highly complementary of the job Colin Kelly has done since taking the post.

“We’re also on the good side of the draw and if you get momentum going there’s no reason why we can’t beat Wicklow and give Meath a good rattle.

“We won’t give anyone an easy match if we perform and with Dublin on the other side of the draw we have a chance if, as I say, momentum gets going,” he concluded.