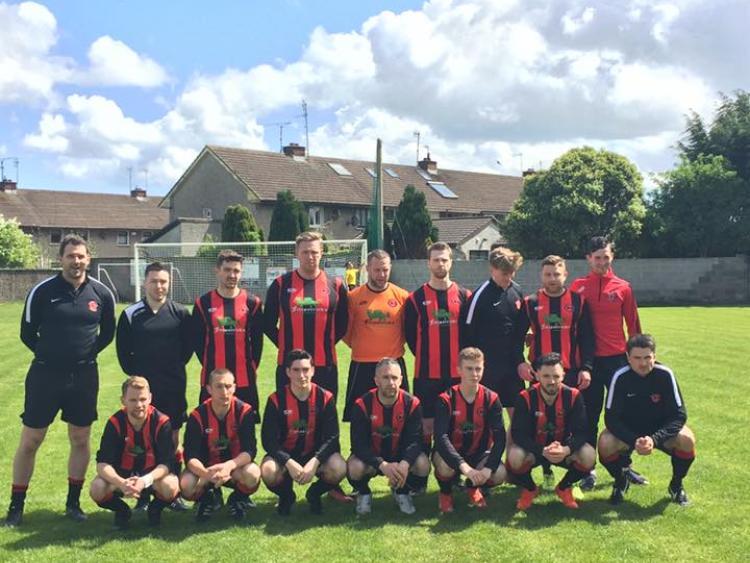 Paddy Quinn and Danny O'Connor helped the peninsula outfit to a 2-1 lead at the break before Ciaran Sheelan made it three two-minutes into the second-half. And, while Trim pulled a goal back, Bellurgan held on for a Cup Final meeting with Navan Cosmos

Bellurgan started well and dominated the opening 10 minutes, although both sides struggled to muster a meaningful effort on goal.

This was to all change on the 15-minute mark though, an excellent ball was whipped into the back stick and, after a feeble clearance from the Trim defender, the ball fell to Quinn who volleyed home into the bottom left hand corner to give the Black and Red striped an early lead.

Trim were playing high up the field and their pressure was rewarded just 10 minutes later, albeit after a dubious decision by the referee to award them a corner from which they equalised.

This was the wake-up call Bellurgan needed and for the remainder of the first half they were the dominant outfit. With a few minutes remaining in the first period Owen Armstrong whipped in a fantastic corner from the left which found the head of O'Connor who nodded home to ensure the home side reinstated their advantage at the break.

Bellurgan's fiery attacking form continued straight after half-time and they soon found themselves with a two-goal cushion. Just two minutes after the restart, Quinn went on a mazy dribble and was hacked down thirty-yards from goal. Sheelan stepped-up and his beautifully weighted strike went around the wall and into the bottom left-hand corner to make it 3-1.

However, semi-finals are never easy to negotiate as Bellurgan found out when, Trim pulled a goal back through a set-piece on 55 minutes which Robbie Arthur couldn't do much about in the Bellurgan goal.

From there on, the game was scrappy with both sides finishing with 10 men, John Smyth the man seeing red for the north-Louth side. The red cards were a testament to the final half an hour with very little goalmouth action but most importantly Bellurgan managed to hold on to their precious lead and book their place in the Tully Cup final.

The final will take place at 14:30 on Sunday the 28th of May in United Park against the coveted Navan Cosmos in what is expected to be an enthralling encounter.