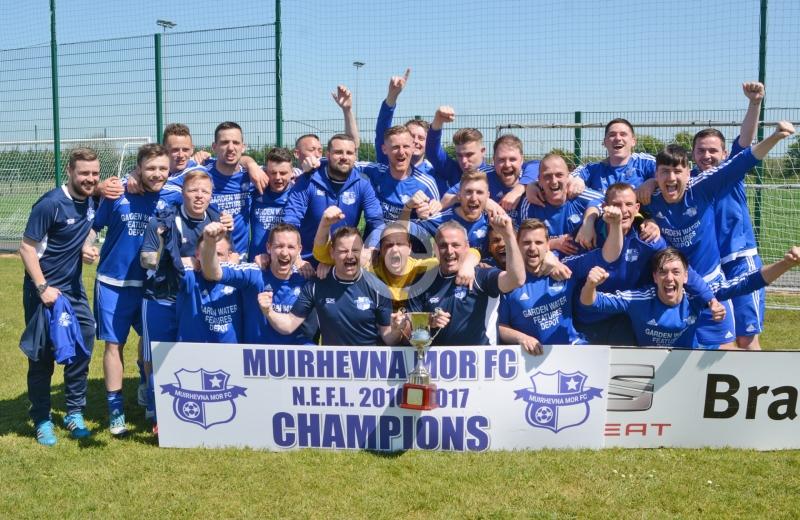 There were scenes of joy at the NEFL grounds in Navan on Sunday as Muirhevna Mor clinched the three-points necessary to win their first ever NEFL Premier Division title with a 3-0 victory over Navan Cosmos.

Just 12 months after sealing promotion for the First Division, Tiarnan Mulvenna's side have made NEFL history by becoming the first team to win the First Division and then the Premier Divison title the very next season. Goals from Mickey O'Kane, Chris Caufield and Brendan Hughes in the second-half were enough for the Mor to stride to victory after a scoreless first period.

The Mor started off well against a Cosmos side depleted by injuries and suspensions and nearly took the lead a quarter of an hour in when forward Paudie Hearty had an effort cleared off the line and the dominance continued up until the break with numerous chances falling the Dundalk men's way.

Gary Clarke should've scored on 25 minutes but hit it straight at the Cosmos Keeper and moments later right back Brian Begley was denied a clear penalty by the referee after he was tripped in the area. Just before half-time, Jimmy Cooney broke into the Cosmos box but his squared ball to O'Kane was cut out to leave the game scoreless at the break.

As the second half progressed, it was evident that the league leaders would eventually find the back of the net. Just before the hour mark, David Cooney plucked a Cosmos free kick and started a counter attack with clever passing resulting in main man Micky O'Kane getting a free header which the keeper could only parry and he was on hand to slam home the opening goal.

Tensions were running high at this stage and the home side started to lose the rag of themselves a bit with Anto Burke sent off for a nasty tackle on Brian Begley with 70 minutes on the clock and from here on in Muirhevna Mor looked certain to go on and win the game and the league.

A period of fantastic football by Muirhevna Mor ensued deserving of winning any trophy and showing just how good side they have been all season, absolutely tearing the Navan defence to shreds in the final quarter of the match.

Firstly, they doubled their lead and effectively sealed the title when substitute Stephen Smith's cross was met by Chris Caufield and then a few minutes from time another substitute Brendan Hughes was on hand to put the icing on the cake on a fantastic performance and fantastic league campaign for the new champions. The result means Muirhevna Mor end the season on top of the NEFL pile for the first time in their illustrious history with 39 points after 18 games. An incredible achievement for the newly promoted side, who are sure to be competing at the very top for many years to come. Congratulations.