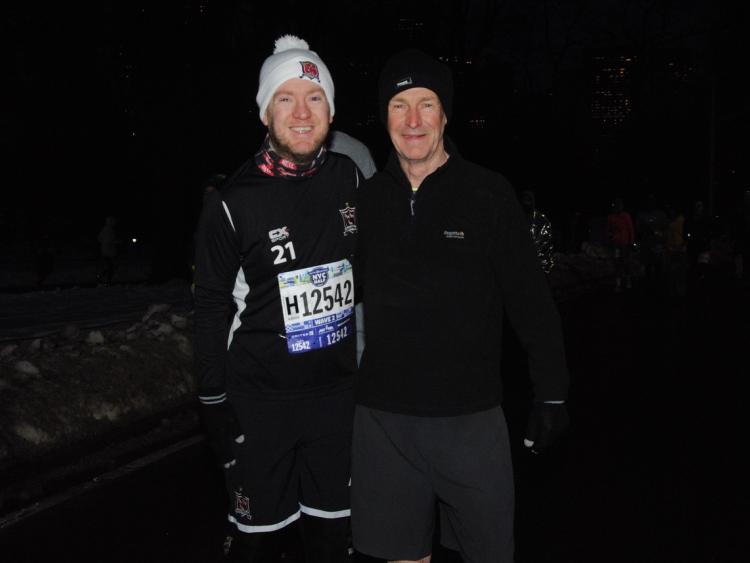 Jim and Ciaran Callan before the half-marathon

Father and son races are part of the fabric at primary school sports days around the country, and probably worldwide. It puts paternal relationships to the test, in a sense. It’s a ‘my father against yours’ kind of thing for the child and vice versa for the adults.

However, the feat of completing the New York half-marathon is certainly not a trivial achievement, especially when you complete it alongside a close relative.

And in the case of Haggardstown natives Jim and Ciaran Callan, who completed the 13.1-mile trek around New York city in the March 19th event, the pride and delight at not only completing the race, but doing it together is not lost.

Jim, a competitive runner of over 40-years, finds his pride at the achievement hard to contain.

“It made me feel very proud of Ciaran because it was his first half-marathon and he didn’t realise exactly what was involved in preparing.

“He would tell you himself that he struggled but he did it and once you do the first one you know what’s involved so you work that wee bit harder the next time. That’s what he’ll probably do.

“It was wonderful to be able to do it together and we’ll be looking to do the Dublin half-marathon now in September. That’s the hope,” he added.

Although, the fact that they’re planning future events together should not be misconstrued. As Ciaran points out, half-marathons are not walks in the park, so to speak.

“The training regime had to change completely because before this I was only in the gym and then I had to add running to my criteria,” the Donore National School teacher said.

“If you’re doing a half-marathon, you’re looking at running three-to-four days a week at various distances because 13.1 miles is quite a distance when you put it down in number form.

“I hadn’t run a half-marathon before. The longest distance I ran before was a 10km so when you look at the fact that a marathon is 22km, it was a big jump to make.

“I was in a position where I felt that the training I was doing with my gym ‘Fighting Fit’ and with Dad on my side, I’d be ready for the race.

“Training for a half-marathon can take anywhere between 12-14 weeks so I had that period in which I could train so I was very much geared up for it after I got accepted,” he continued.

On the topic of getting accepted, Ciaran talks about a certain week in early December where quite a lot happened for him.

“The idea was floated around by my Dad and Mum as to whether we would like to apply for the half-marathon,” Ciaran explains.

“Whereas, I had to go through the lottery because, as this was my first half-marathon, I didn’t have a qualifying time per se. But, since I had put Dad down as my running partner, I was actually successful and the two of us got in.

“Funnily enough, we got accepted on the 9th of December which was the night after Dundalk had played Maccabi Tel-Aviv and that was actually a big week for me in many ways because I had gotten my job in Donore National School that week as well.

“So, although Dundalk lost, it was a pretty memorable week all-round,” he chuckled.”

The race itself saw both the Callans complete the course with the times they had aimed for too, Jim crossed the finish line on the two-hour mark while Ciaran joined him 54 minutes later.

“I was very happy with it because it happened the way I expected it to.”

And Ciaran was full of praise for father's exploits.

“Dad obviously had a different timescale as to how he wanted to finish the marathon. We agreed that we’d run the first three-miles together, just under 5km,” said the Louth Internet Radio presenter.

“At the three-mile mark, he told me that I was paced at exactly the right pace I needed to be in order to finish the race comfortably so he decided to move on ahead.

“He finished in two-hours while I crossed the line officially after two-hours and 54 minutes. He finished a good 54 minutes ahead of me but for his running level and the training that he’s been putting in for the past number of years, it’s an exceptional feat for him.”

“Running is in his DNA and it wouldn’t go amiss that every day he would go out for a run of some sort of distance.

“When we got home from New York he was back out on the roads, thinking of the next race.

“It must also be said that he’s very much involved in Badminton in County Louth as well and it’s brilliant to see somebody at his age so active and playing, as well as coaching, his sports.”

Jim was coy on revealing his age, only to say that it is but a number. And you would have to believe him when you listen to just how active he still is.

“Running is part and parcel of my life,” he says passionately.

“I’ve been running for over 40-years, along with playing badminton. It’s no great difficulty for me at all.

His attitude to running is mirrored to his sentiments on Badminton.

“Badminton, I’ve been involved in the game for 40-years although I spend much of my time coaching now.

“The masters tournaments were a godsend. You can play in the local leagues but it’s all with very fit young fellas and your experience only takes you so far.

“But, with the masters it’s like-for-like. It’s wonderful, it really is. To be still able to play and at your own pace it fantastic.

“The masters events keep badminton fresh for the older generation. I’m playing badminton over 40 years so it’s no great hardship to keep myself fit,” said Jim.

But, in the age of recovery sessions and ice-baths, how does Jim recover after his sporting exertions?

“I run about five-days a week. I’m with Jim Gonnelly on a Tuesday night down at St. Helena’s and on a Thursday night at the DkIT, that’s about an hour’s training each.

“On a Saturday morning, then, I go out for a long run with another group which could be anything from six-miles up to 12-miles and you can turn off wherever you like. So, from that point-of-view, you can tailor it to suit you.

“This morning (Saturday), I ran for eight-miles and last week I only ran for six,” he uttered as if it were a routine.

“Tomorrow night (Sunday), I’m going to Dublin for the Virgin Night Run (10K) and then on Tuesday night the DkIT have their 10K race so I’ll be doing that as well,” continued Jim.

“Tomorrow night, I won’t race it but I’d be hoping to race it on Tuesday night. I just space things out, that’s the most important thing for me.”

For Ciaran, the scenery involved in running the New York race has somewhat inspired him to pursue more of a running career.

A loss to Stephen Kenny some might say, but not Ciaran.

“The first six miles of that race sees you run through Central Park and it’s extremely scenic and beautiful,” he added.

“You tend to forget that Central Park is in the middle of the buzzing metropolis that is New York City but it was actually quite quiet and serene, but then as soon as you come out of Central Park you hit Time Square.

“It’s the only race where Time Square is actually shut down for a period of time so to be running through an area which is a vocal point of tourism in New York was absolutely fantastic.

“Wall Street itself is another massive place in New York so to run through that and finish it was absolutely fantastic and it wasn’t lost on me whatsoever. It’s an amazing run and I can recommend it to anyone. If you want to run any race, it’s this one,” Ciaran said.

“I spoke to Graham Byrne (Dundalk FC fitness coach) before I went. He was just monitoring my progress but obviously, he’s gotten a huge commitment with Dundalk.

“I think with my age the Lilywhite jersey dream is over,” Callan laughed.

“In saying that, I’m absolutely delighted that I’m doing something that is enjoyable and there is a great group mentality to it as well.

“I’m crazy enough to have signed up for the Dublin half-marathon about three-or-four days after I came home from New York but there’s a much more strategic plan to this now.

“All-in-all, I’ve been hit by the running bug big time and I’m really looking forward to the next challenge.”

One challenge Jim won’t have to overcome is his wife Sadie, though. In fact, she is very supportive of him being out and about!

“She’s always and ever supported me in my sport. I think it could have a lot to do with keeping me out of the house, though,” Jim said in a fit of laughter.

So, while Jim and Ciaran’s accomplishments in the Big Apple may have set a dangerous precedent, father/son sports day events are sure to have an extra 'crunch' in the coming weeks.