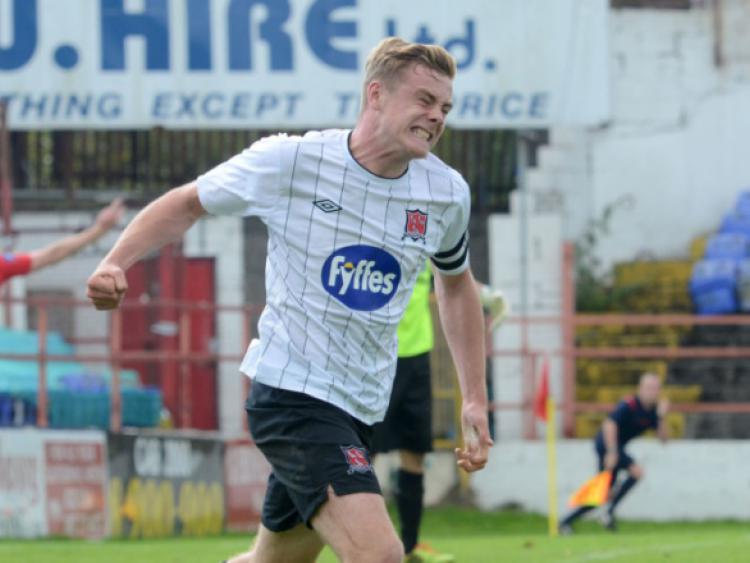 For the first time this season, Bohemians manager Keith Long had to plan for a league game without the services of midfielder Georgie Poynton on Friday night.
The Irish u19 Player of the Year was ineligible to play against his parent club Dundalk due to the terms of his loan agreement.
And, despite holding such close ties with the Lilywhites, the 19-year-old felt disappointed by the showing of his temporary employers in their 2-0 defeat at Oriel Park.
“I’m part of Bohs tonight so I wanted the three-points effectively,” Poynton told the Dundalk Democrat.
“So it’s disappointing that we haven’t gotten them because we want to pick up as many three-points as we can.
“We did alright in the second-half but okay is not good enough and we need to up our standards. We have identified that as a group and you can make all the excuses in the world but we need to turn it around ourselves and start taking more responsibility.”
On the loan spell itself, Poynton is delighted to be getting the opportunity to play regular football at the highest domestic level.
“I’m really enjoying it with Bohs,” he said.
“You can train as much as you want but it ultimately comes down to playing games and it’s a great opportunity for me to do that.
“I’m with different coaches so that means there’s different philosophies and things like that. The training is different and it’s tailored differently so I’ve had to adapt personally to leaving here and to hearing different voices.”
The stand-out moment of the midfielder’s time with the Gypsies to date was scoring in the Dublin derby with Shamrock Rovers earlier in the season, despite the Phibsborough club losing.
And, according to Poynton, it’s moments like that which vindicates his decision to go out and gain first-team experience.
“My first ever Dublin derby I scored and that was good. I didn’t get many opportunities here but the idea was to go out and try to prove myself.
“So, whether that means coming back, hopefully so. But, I want to come back and play. I don’t want to come back and make up numbers again.
“I want to get as much experience as I can with Bohs this season and then come back to try and stake a claim to play.
“I’m not saying that I’m going to walk into the team or anything, it’s far from that, but I don’t really want to make-up numbers anymore. I think I’ve gone by that age at this stage.
“I’ve been in contact. I think Rúaidhri Higgins was at a few of the games and I’ve been talking to Stephen and people at the club regularly so they know how I’m doing,” added Poynton.