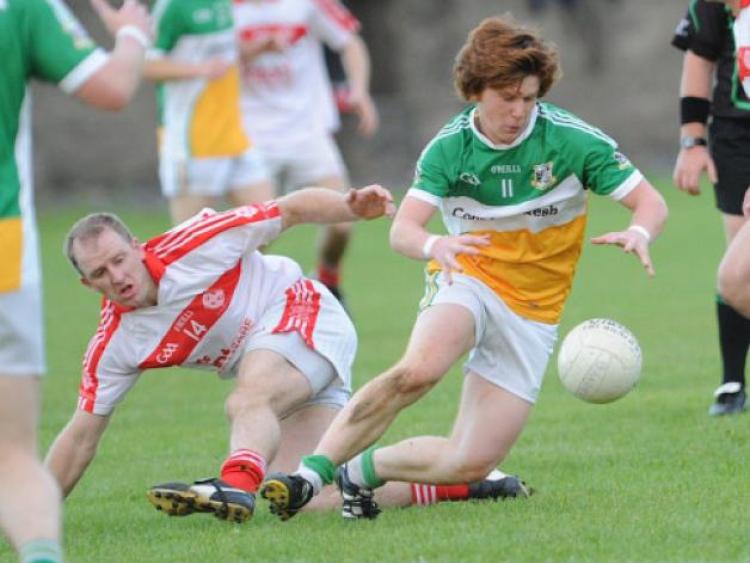 Joes manager Wayne McKeever got one over on his native club in Dromiskin last Friday night as the Intermediate Championship holders defeated the O’Connell’s after extra-time in what turned out to be a thrilling contest.

36 scores, 10 different scorers and an extra 20 minutes aside made for excellent viewing as the hosts just pipped their near neighbours to the winning post, putting themselves through to the semi-final of the Paddy Sheelan Shield in the process.

The Castlebellingham outfit couldn’t have come much closer though, with Niall Conlon’s 1-9 archly-contributing to the 2-13 tally his side posted. A tally which would be good enough to win most games.

However, with each of the home side’s starting forwards getting scores, McKeever’s men deserved to progress.

The Dromiskin/Darver men began the brighter and led 0-6 to two after 20 minutes with Craig Doherty, Conall Smyth and Alan Quigley lively in their attack, and further points from Doherty (2) and Quigley helped them take a 0-9 – 0-5 lead to the break with Conlon grabbing four of the visitor’s points.

Conlon started the second-half on fire and pointed straight from the restart, followed by one from Jackie Agnew before Conor Culligan hit the first three-pointer to nudge his side ahead for the first time.

From there the game ebbed and flowed with the lead changing hands twice more before a Paul McKeever point levelled affairs with 53 minutes on the clock. Despite having chances, neither side could force a winner with extra-time to follow.

The opening period of which saw the Joes dominate with Doherty (2) and Quigley (3) putting them five ahead at the change of ends, despite the O’Connell’s spurning goal chances at the other end.

A Smyth point then tagged the Joes into a six-point lead before Conlon won and converted a penalty followed by McKeever narrowing the deficit to two-points. The Joes would hold out though.

The Gaels left Togher on Sunday with their place in the semi-finals of the Paddy Sheelan Shield secured following a four-point win over the locals, Naomh Fionnbarra.

Malachy O’Rourke’s men hit the front from the off and were 1-1 to the good before a Bernard Osbourne free, one of seven points he would hit on the day, got the Barrs on the board.

The blustery conditions at John Markey Park made it difficult for free-flowing football, but the home team used the conditions to their advantage as they cut the Gaels lead to the minimum by half-time.

Trailing 1-3 to 0-5, the 2015 Christy Bellew Cup winners were slow out of the blocks for the second-half and afforded the Dundalk side opportunities to extend their lead, which they did.

The Barrs continued to fight though with Pádraic Murphy and Osbourne, their only two scorers on the day, continuing to chisel at the deficit.

However, the closest they got to the Gaels was three-points. A gap which they never genuinely looked like closing.

Hunterstown got their first win of the year on Sunday morning as they comprehensively saw off the Na Piarsaigh challenge.

Alan Landy was on top form for the west-Louth men, who led from the off and took a 1-11 to 0-4 lead to half-time with David Boyle offering some resistance in the Dundalk side's attack.

Landy struck five points prior to the change of ends with Brendan Lennon rattling in the first major along with three-points from Louth u21 forward Glen Matthews.

The visitors did improve after half-time with Alan McAuley goaling but a revival was never likely with Landy and inside partner Matthews impressing. And further goals followed with Landy and Colm McKenna scoring a goal apiece while midfielders David Finn and Ryan Ward also got in on the scoring act, hitting one point each.

The Oliver Plunketts ran out deserved victors over Kilkerley on Sunday morning as they progressed to the last four of the Paddy Sheelan Shield.

For long periods of an enjoyable contest, it was a shoot-out between Kilkerley’s Tadhg McEneaney and the Plunketts’ Emmet Kelleher with both players ending the contest with eight-points.

The Plunketts started the stronger with Kelleher, Robert Brodigan and Conor Earley causing the country men quite a few problems in defence. While, Kilkerley were perhaps lucky to only be trailing by three at half-time, 0-8 to 0-5

However, the senior side lifted their game after the interval and grew somewhat in confidence with McEneaney on song in front of the posts, although they never breached the Plunkett’s two-point cushion at any stage.

The second-half was nip and tuck the whole way to the finish, but the Drogheda men held on with Seamus Guinn excelling defensively in the closing stages.

Glen Emmets launched a fantastic second-half comeback in Louth Village on Sunday morning to account for St. Mochtas by a single-point.

Despite scoring only twice in the opening half-hour, both of which came from Ronan Grufferty frees, and trailing 0-9 to two at half-time, Emmets put in an excellent second-half which saw Grufferty and Rúairí O’Neill scoring the crucial goals.

The home side started the brighter with Ultan Larney and Danny Kindlon on song and deservedly took a strong lead to the break, although it did take a fine save from Fergus English to deny Emmets a goal after 20 minutes

Martin McGahon extended the Mochtas lead shortly after the re-start, however, a 60-second burst which saw Grufferty drive an effort to the top-corner was followed by a second major, through O’Neill, in the very next phase of play.

The hosts rallied and were still leading 0-16 to 2-6 with injury-time approaching only for the Tullyallen natives to launch yet another offensive siege, drawing four frees, all of which were converted by their arch-poachers in attack before substitute James Butler struck a late, late winner.

The John Mitchels proved too strong for a battling Dowdallshill in Dundalk on Sunday as they moved into the last four of the Kevin Mullen Plate.

Five goals from the Ballybailie natives, two before and three after the interval, was the sticking point for Dowdallshill. This despite outscoring the visitors in terms of the number of scores accrued which reflected 12-10 in their favour.

The scoreline read 2-3 to 0-3 at the break with the Mitchels’ goals coming in the 25th and 29th minutes respectively before they added another three majors over a steadfast nine-minute second-half spell.

This all after the home team had gotten themselves back into contention at the beginning of the second-half, narrowing the gap to five.

And despite trailing by 14-points with 10-minutes remaining, they stuck at it and ended with six straight points with Aidan McCabe ending their top-scorer with 0-7. Although, the Mitchels were still the superior on the day.