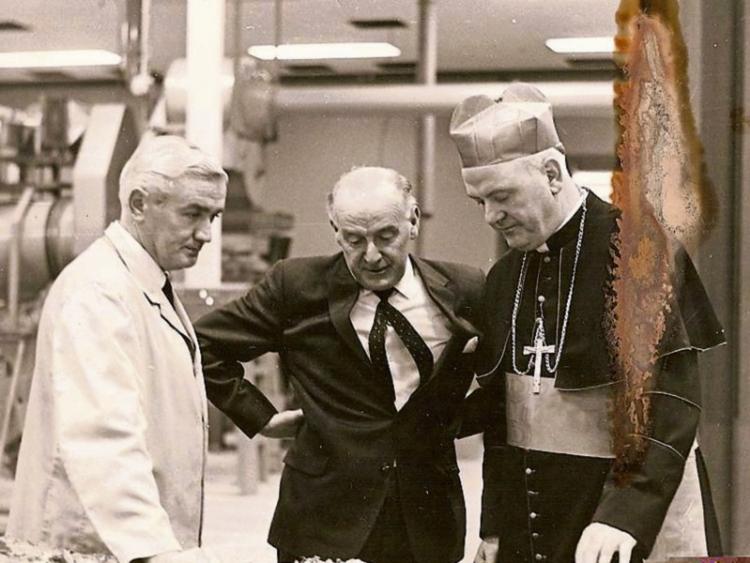 I spotted the photograph accompanying this article on the wonderful online resource 'Dundalk Northend and Friends' Facebook page last week.

In a single moment - as the best photographs usually do - it captured what 'old' Dundalk was all about.

Religion and industry. The two old titans of this town.

At least back in the days of black and white and sepia tones.

It is rather remarkable - from the point of view of our more sensitive modern sensibilities certainly - that a member of the clergy is pictured visiting a factory which produced tobacco products. Such a photo opportunity today would be strictly verboten and not even countenanced.

Both these former titans have declined of late (join the gang says a newspaper editor). Tobacco, and more pertinently the smoking of it, is of course a serious health 'no-no', with a myriad of severe medical complications directly linked to it.

PJ Carroll's factories in Dundalk were a huge source of employment for the area throughout the early to mid 20th century. From my own point of view my grandfather and grand aunt worked a large portion of their working lives there and as much as it was a massive economic help for local families it was also a social outlet for so many too.

From other photographs I have seen over the years, both my grandfather and grand aunt were involved in many of the social functions there. These black and white snapshots seem to show happy people enjoying their work and the perks of it.

Of course times have changed and the fortunes of all tobacco producers nose-dived when the disastrous health issues became more commonly understood.

PJ Carroll's packed up and left Dundalk in the 1990s. However it has left an indelible mark on the collective conscience of Dundalk folk. It has also left behind a number of buildings which stand as a testament to their time here.

DkIT now owns the very - at the time anyway - modern looking former factory on the Dublin Road. I recall that just after the college had acquired the impressive glass-sheathed building I was working a summer job there, helping out with the refurbishment of a section of the facility.

It was to be converted into workshops for apprentice plumbers and other tradespeople.

This led to my viewing the internal structures of the building and the many secrets it held - or so my youthful imagination had hoped.

Although production of tobacco had ceased some years beforehand, the smell of it was ingrained into the very fabric of the building. The dust was rich with it. Dust masks were an essential requirement at all times.

Generations of cigarette production had left its mark. I can still see the rather odd wooden Indian/Native American figure in the reception area. It's presence always piqued my interest and even as builders traipsed in and out and parts of the building were torn down and rebuilt, there he stood, impassive and stoic.

I've no idea what eventually became of our Indian friend, maybe he's still there. I hope he is.

The photograph reproduced here also shows Cardinal Conway on that particular visit. I vaguely remember how senior religious figures would be nearly always on hand at the opening of something or another of importance here in the town. It was the same story the length and breadth of the island.

This was more or less drawing to an end when I started school in the late 1980s, so my memory is very limited. I can, however, recall that just before I started school the last of the Christian Brothers departed from Chapel Street.

Even then and from talking to others about it subsequently, it was seen as the end of an era and the decline of the church's influence on society in general.

Attitudes change all the time, but the memories will remain - positive and negative.