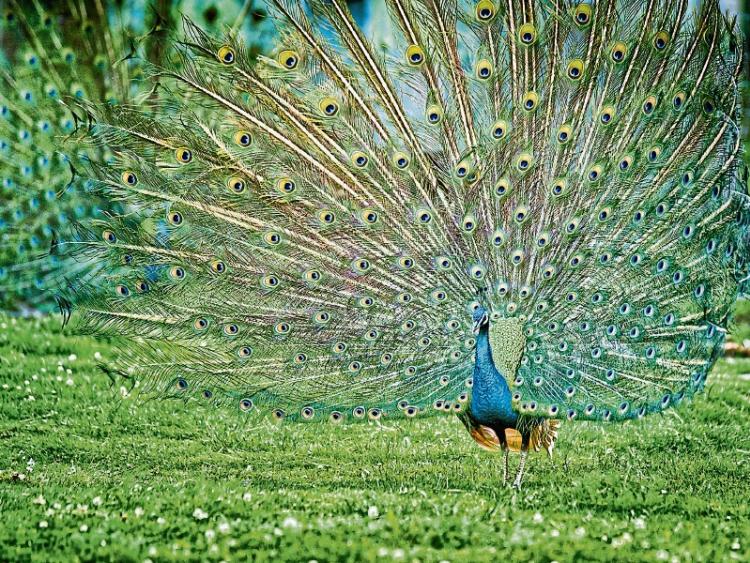 Apparently it's mating season in the peacock world. Which might go some way to explaining a strange occurrence last week in Castlebellingham.

It's not every Wednesday evening that people crowd around the front of your house and start snapping and flashing with their camera phones. I'm fairly certain my celebrity status isn't anywhere near the alphabet range right now; so naturally I was confused.

Manchester City were stumbling towards a casual Champions League exit on the telly when I heard it first.

Not unlike the sound of a prehistoric dinosaur the other side of the window.

I peered out and noticed the assembled crowd. My initial concern was for the state of the windows and that they were long overdue a clean - and now the world and its dog were staring at them - typical.

Once that strange thought-segway vanished the matter of why exactly these people were staring at the house returned.

Above on the roof, strutting around like, well a peacock, was in fact a peacock.

It was mewling and croaking away like a lost soul.

I decided to join the assembled crowd outside and stare at my own house. And there he was on the peak of the roof, gloriously feathered and quite annoyed to say the least.

Somewhere in the distance, another peacock - most probably of the female variety - was calling, but our distressed friend appeared unable to either get off the roof or figure out where the booty call was coming from. I quickly understood his quandary.

Children from around the estate joined the crowd. It was past their bedtime, but neither they nor their parents seemed too bothered by that - hell, there's a bleedin' peacock on the roof!

One among our number said he had even called the guards. I could only imagine that phone call:

- 'Okay, well let me just put you through to our exotic animals section. I think David Attenborough's on duty tonight.....'

Back at the roof, our feathered friend had made the decision to bed down for the night, despite the constant wooing of his fellow she-cock someplace else - poor bugger.

However, any sympathy I had for him had all but evaporated by about 4.30am the next morning.

Lacking a shotgun or any other type of projectile firing device, there was little that could be done to stop the constant cawing and barking from above.

Eventually, at about 6am, there was a scuffling of claws (talons?) on the slates and with a final utterance our roof-lodger departed.

Whether he found his distant lost love, or made his way home, I never found out.

And frankly after three hours of sleep I couldn't have cared less if he breathed fire and was goldplated.