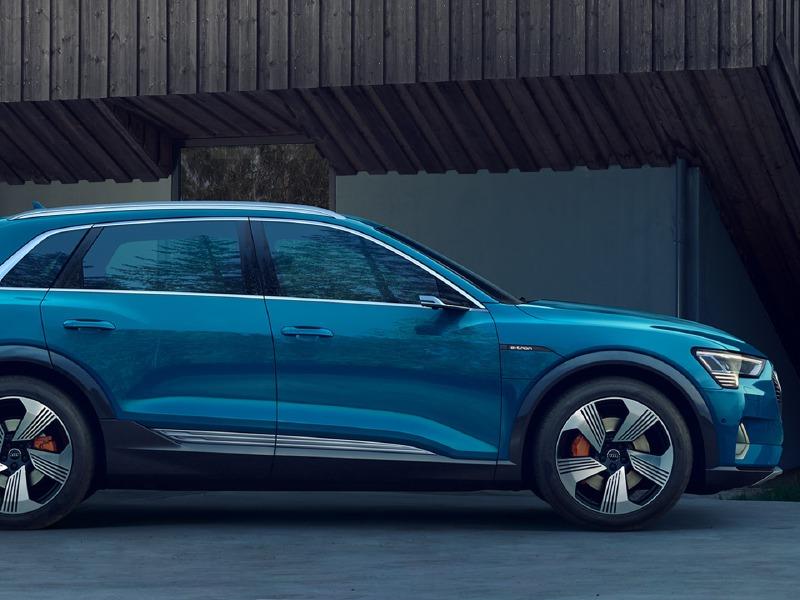 The wheels are in motion to put in place the legislation (early 2020) to ban the sale of petrol and diesel cars from 2030.

The energy and pace behind this government’s plan is laudable but in terms of other initiatives this country needs, and needs now, is startling. Sort out the hospital and housing crisis first would be my advice to them but whenever, apart from the smoking ban and the plastic bag ban, has the government delivered big time? It seems they are good at banning but not doing.

As this carbon-correctness is all pervasive Audi are offering an all electric SUV, the e-tron. The irony for me is that if I was planning a trip that needed SUV capability my engine of choice would be petrol or diesel. I don't think I’d be able for the PHd level of planning associated with recharging against the current charging network..

The e-tron is about the same size as a Q8 and a smidgin smaller than the Q7 so it's a big car. Being all electric Audi have resisted marking it out in terms of design making it look normal Audi and that's the way to persuade buyers. It's not an electric car with electric car looks, it's a normal car, just that it's powered by electricity. How this is done is via 4 electric motors at each wheel - 2 x 224 hp at the rear with 2 x 184 hp at the front. All this hp combines to deliver an overall power rating of 355hp/265kW. Between the wheels there’s a 95kW battery under the floor. That’s big but so is the e-tron, with associated SUV weight, so the range isn't as far as I’d have like at 385kms. I managed 300 during my test.

The e-tron slotted in perfectly with my driving/commuting lifestyle and with charging available where I park it relieves a bit of worrying. I don't have a home charger and using the 13A charger really isn't an option as it takes an age to move the battery % indicator up.

There's two welcome charging flaps either side at the front. These should be at the back though to allow reversing into charge points for safe driving away.

In the head to head battle with its competitors the Mercedes EQC, the Tesla Model X and the Jaguar I-Pace it is marginally outselling them which surprised me at they have all accentuated the all electric attributes whereas the Audi understates them. The price tag for a premium, all-electric SUV from Audi is €101,750. It's getting harder and harder to tune my pricing radar but in any man’s language that's pricey.

The interior of the e-tron is plush and lush. Top end Audi’s don't lack in this department, they excel. It’s full of the normal toys and some for electric only cars. The gear selector stands out for design uniqueness and it is a joy to hold. Passenger space is what you’d expect despite having to fit in that enormous battery. There's even a 660ltr boot that’s larger than the longer Q8 - go figure? It’s only available as a 5 seater for now but that might change.

Performance is quite blistering as expected from an instant torque electric vehicle. Petrolheads can happily be renamed electronheads in this new electric age.

Audi has played it safe in offering a totally normal car that happens to be electric powered. It will give buyers confidence to transfer to electricity before the government makes us all do so by 2030.