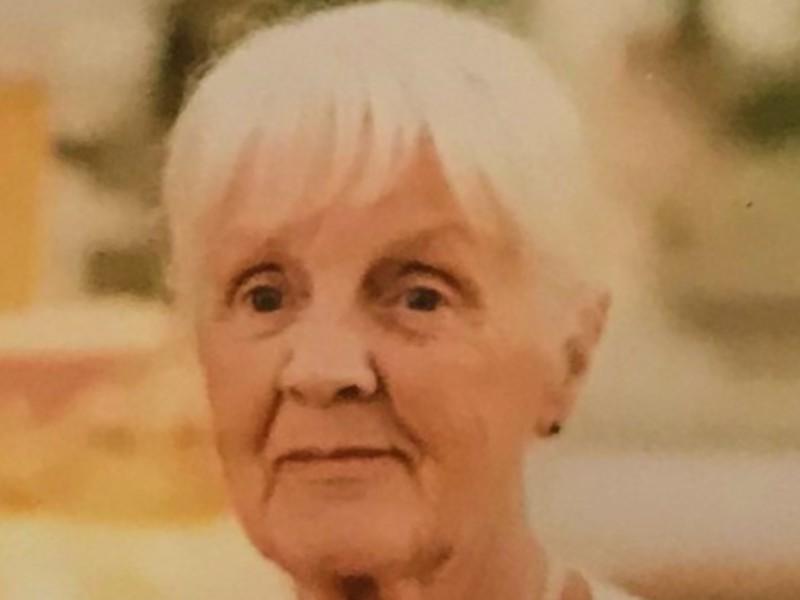 Joan Matthews, Point Road, Dundalk whose death took place on December 19, 2019, was a lady whose family meant everything to her.

She was also very much part of community activities, the church and in helping others.

Joan grew up in Wolfe Tone Terrace, a daughter of the late Patrick and Veronica Carroll.

She worked in Clarks’ shoe factory until her marriage when she became a dedicated homemaker.

In recent years she took up employment in Sofahouse at the Brewery Business Park, Ardee Road, which gave her a new routine until she dedicated her time to her grandchildren.

Joan also had a close relationship with her aunt May Hanratty with whom she spent much time prior to her passing.

She did voluntary work over the years with Saint Vincent de Paul and the Citizens’ Information Centre, and was involved with the Old & Under Privileged Group in Dundalk, arranging trips away and regular local gatherings.

Faith was very important to Joan.

She was a reader in the Holy Family Church before her involvement with the Redemptorist Church where she was part of the ‘Growing in Faith Together’ programme, and a Eucharistic Minister for years.

She was dedicated to Saint Gerard’s novena and the parish community, and hosted annual ‘house Masses’ for neighbours which were followed by social gatherings.

Joan was a member of the Cursillo prayer movement in Dundalk, the Mary Queen of Peace youth group and Bethany house of prayer.

It was a great honour and a special moment for her which she treasured when, in 2017, she met Pope Francis in The Vatican.

Joan’s interests extended to sport, namely the Dundalk FC Supporters’ Club and Greenfield FC with whom her family had a long association.

She was supporter of the Louth team in GAA and enjoyed watching her grandchild play the game.

One of her sons, Kenneth, was a keen runner and every Sunday she would be at an event with Saint Gerard’s AC. She was known for her packed lunches and egg and onion sandwiches.

Above all, Joan was a great family woman. Family meant everything to her.

She was incredibly dedicated and always available, both at home and over the phone.

She was a loyal confidant of her three sons, each of whom recognised and valued her friendship and support in all aspects of their lives.

Joan was very proud of her family’s achievements, and always interested in their endeavours.

She was known for her home-cooking, particularly pastry dishes and puddings, and talented at crochet, making shawls and children’s knitwear for new babies in the family, together with items for her home and blankets. She even made a full Christening robe set for use by her grandchildren.

Other pastimes included gardening and her greenhouse, crosswords, word searches and reading, as well as ballet, musical theatre and listening to classical music.

An elegant, humble and unassuming woman, she enjoyed outings with family, shopping, lunches, day trips to the zoo and attending pantomimes.

There are great memories of family holidays to Romania, Spain, USA and closer to home, summers in Greenore.

Joan also looked forward to visiting her son Keith in the UK.

Recent holidays were enjoyed in Spain, the Canary Islands and Rome, as well as the 2019 Armagh Archdiocesan pilgrimage to Lourdes.

She had good, loyal friends with whom she relished spending time.

Joan was highly-regarded in the community and by her neighbours and friends on the Point Road.

She loved animals and was regularly to be seen on the Navvy Bank with her dogs.

Joan is sadly missed by her sons, Keith, Kenneth and Father Barry, as well as Eilish and Dolores, sister, May McGee, brothers, Aidan, Paddy and Brian, cousin and best friend, Pat Hanratty, grandchildren, including Graham and Liam, brothers and sisters-in-law, nephews, nieces, neighbours, relatives and friends.

After reposing at home, her remains were removed to Saint Joseph’s Redemptorist Church where the funeral Mass at 11am on Monday, December 23, was celebrated by her son Father Barry and Archbishop Eamon Martin, Bishop Michael Router and more than 20 concelebrants.

An exceptionally large gathering heard Father Barry describe his mum as an elegant lady whose faith, hope and love made her central to her sons’ lives.

Reading words from El Divo’s song ‘Mama’, Father Barry reminisced about how Joan inspired her family by her dreams for them and her limitless love that will ensure her memory lives on forever in their hearts.

Readers were Alan McGee and Sister Jean Kelly, while May McGee and Kathleen Carroll participated in the Offertory.

Music was provided by Trevor Clarke and Sarah McCourt.

The Month’s Mind Mass takes place on Sunday next, January 19 at 11am in Saint Joseph’s Redemptorist Church.