OBITUARY: Mattie Hearty was a family man of the highest calibre, who loved GAA 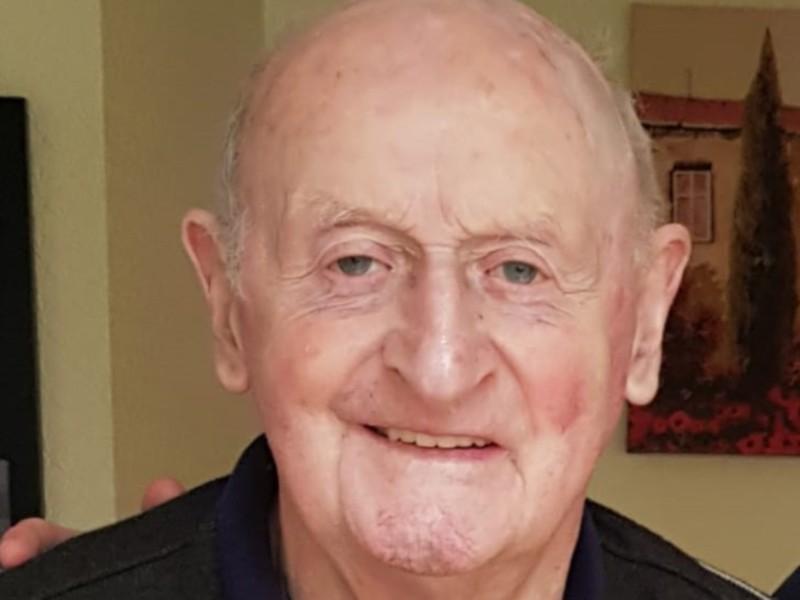 Mattie Hearty, Cherryvale, Bay Estate, Dundalk died peacefully aged 84 after a short illness, surrounded by his family at Our Lady of Lourdes Hospital on November 28 2019.

Mattie attended Saint Malachy’s Primary School and after leaving school he trained as a carpenter, working with various builders including Duffys, before settling in PJ Carroll’s.

A carpenter of some renown, Mattie was a perfectionist, a tradesman of the highest quality, his attention to detail was famous and upon completion of a job to his usual high standard, you’d hear his famous line “what’s my name?”

He spent many happy years working in PJ Carroll’s, between the “Old Factory” in Church Street and the “New Factory” on the Dublin Road. Mattie was the go-to man for training new apprentices and was meticulous in educating the apprentices in the various aspects of the carpentry trade.

Mattie also enjoyed numerous trips to the Carroll’s Irish Open Golf in Portmarnock to set-up stands, signage, tents etc, during Carrolls sponsorship of the event. Upon retiring Mattie never hung up his tools, continuing to work on a range of DIY jobs in his own home and the homes of family, relations and friends.

Mattie met his beloved wife of 49 years Rita Shevlin in Maxim’s dance hall in Belfast in the late 60s, marrying in the Church of the Sacred Heart in Cloghogue, Newry in August 1970.

The couple set-up a loving family home in Cherryvale, Bay Estate, with sons Patrick and David, and daughter Lisa.

Mattie and Rita ----- “his wee girl” as he called her, had a very happy life together. They were inseparable and whether it was a spin into town for lunch in McGeoughs or to get some messages in Tesco; a shopping trip to Newry or a day trip by train to Dublin or Dun Laoghaire they simply loved each other’s company.

They particularly enjoyed their numerous holidays to Salou and the Costa del Sol during their years together.

After Mattie suffered some ill health six years ago, following his discharge from hospital, Rita devoted herself to nursing him back to health and whilst not as active as he was in the past, Mattie enjoyed a good quality of life in recent years.

In the days before mobile phones and even before every house had a landline, Mattie ensured Rita kept in contact with her family with regular weekend car trips to Nannie Shevlin’s in Belfast, where the whole Shevlin connection would get together and Mattie enjoyed visits to the Rossa GAA club in Belfast with Rita’s brother Harry.

During Mattie’s working career, after a long working week, if the family weren’t in Belfast and Louth weren’t playing; Sunday was for family time and outings. Visits to his aunt Katie’s in Riverstown or spins to Carlingford, Gyles Quay or further afield and treating the family to tea in a nice restaurant on the way home.

And after working hard all year, Mattie loved nothing more than an annual family holiday, enjoying many memorable holidays with Rita, Patrick, David and Lisa throughout Ireland in Killarney, Galway, Tramore and Donegal to name but a few, and also holidays in Isle of Man and Spain.

Mattie simply loved spending time with and treating his family.

When his grandchildren came along, they lit up Mattie’s life.

His eyes would dance in his head, a smile from cheek to cheek when the grandchildren walked into the house in Bay Estate.

He was so proud of their achievements in school and pastimes.

He so enjoyed being part of and hearing about their lives, attending their football games, dance shows, school plays, Feis’ etc., taking them for walks with Nannie Rita or collecting them from pre-school and school.

Mattie got great pleasure from his visits to Patrick and Elaine’s house in Park Avenue or David and Anita’s house in Kingswood, and would be magnanimous in his gratitude to Elaine or Anita for the hospitality shown to him by them or for a meal they provided.

Mattie was a very caring brother and enjoyed regular visits to his sisters Ellen, Kathleen and Annie’s houses to check on their well-being and to catch up on their families.

Additionally, Mattie was a generous uncle to his nieces and nephews and will be sadly missed by them all.

A family man of the highest calibre, family was paramount in Mattie’s life.

He lived for his wife, children, grandchildren and daughters-in-law. Indeed, as long as his family were happy, Mattie was happy.

Mattie was a wonderful role model to all.

Outside of family life, Mattie was a true GAA man, a lifelong member and supporter of Dundalk Gaels. He was proud of the role he played in assisting with roofing the Gaels dressing rooms in the mid-80s. Mattie also had a great affection for local team Na Piarsaigh, following his sons Patrick and David’s involvement with keen interest, but Louth or the “Wee County” as Mattie affectionately called them were his real passion.

He followed Louth the length and breadth of the country.

His heroes were not George Best and Denis Law, his heroes were Kevin Beahan, Jim “Red” Meehan, Dermot O’Brien and Stephen White. Whilst others headed for Oriel Park to watch soccer, Mattie headed for the Athletic Grounds on the Ramparts to watch GAA, instilling that love for the Wee County and all things GAA into his sons Patrick and David from a young age, retelling the story of Sunday, September 22, 1957, his proudest sporting day, many times.

In later years, when Mattie was not as fit to attend Louth games, he relished listening to Colm Corrigan’s passionate Louth match commentaries on LMFM.

A gentleman in the true sense of the word, a big gentle giant Mattie had a genial personality and was a man with simple tastes.

In later years there was nothing Mattie enjoyed better than sitting watching sports on TV whilst enjoying a can of draught Guinness or a glass of red wine at the weekend in the company of his family.

He was very partial to sweets and chocolate, Cadbury Bourneville being his particular favourite. Mattie loved the daily newspaper and would read it from cover to cover, and looked forward to getting a copy of the local newspaper each week to read all about the local news and sports.

Having reposed at his residence Mattie’s remains were taken to the Church of the Holy Family were requiem Mass was celebrated by Father Sean McArdle and Father Cormac McNamara.

Offertory gifts were presented by daughters in law Elaine Hearty and Anita Hearty, and gifts that symbolised Mattie’s life were presented at the start of the requiem mass by grandchildren Nathan, Emma, Niamh, Eimear, Sarah, Evan and Áine Hearty. These included a Dundalk Gaels football, his Louth GAA jersey, player statue and cap, a Bourneville chocolate bar, his reading glasses and a newspaper, measuring tape and hammer, and a photograph with his seven grandchildren.

A very heart-warming and touching eulogy and reflection were given by son Patrick Hearty.

After the funeral Mass, Mattie’s remains were carried from the church to the beautiful refrain of his favourite song the Black Hills of Dakota. Interment took place in Saint Fursey's cemetery, Haggardstown. The exceptional attendance at the funeral mass and interment was testament to the affection in which Mattie was held by so many.

Months Mind Mass will be offered for Mattie on Sunday December 29th in Church of the Holy Family at 11am.

Ar dheis Dé do raibh a anam. An Lú Abú.