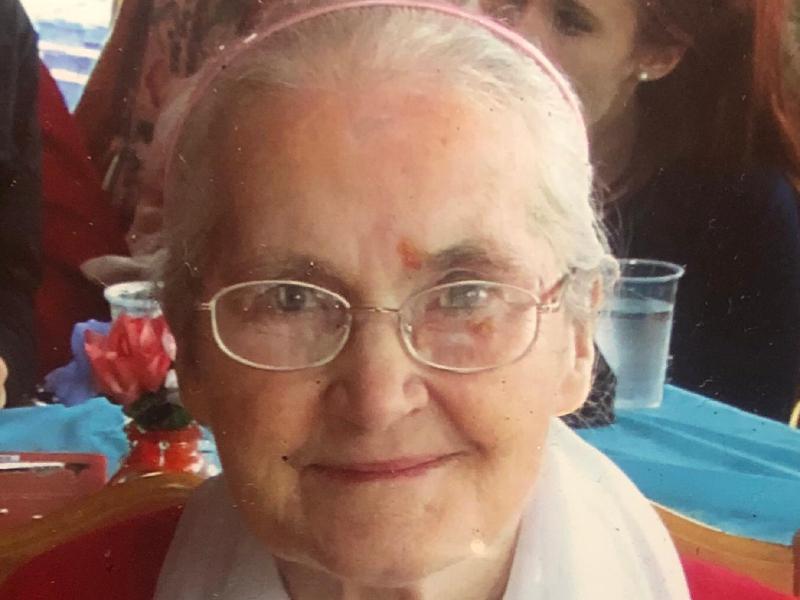 Geraldine O’Connor who died on Saint Patrick’s Day was a lady who defied great adversity fortified by her great faith which sustained her through a number of health crises , including a cancer diagnosis when given six months to live but extended to 16 years.

Geraldine was born with a physical disability, but made light of that handicap, and was very gifted and possessed a high intellect. She was especially talented at art, and very proficient at knitting and making Aran cardigans and jumpers.

She was reared by her granny Matthews and aunt Theresa in Blackrock, where she grew up with her cousins the Foxes and Lennons, who were like brothers and sisters.

She attended the local national school, and received her secondary education in Saint Vincent’s in Dundalk.

She moved to England in the late 60s, and lived there for 25 years, working as a secretary/typist.

She returned to Dundalk, and lived with her aunt Theresa Matthews in Glenmor, Muirhevnamor.

She became ill 15 years ago and needed a house suitable to her needs, which resulted in her moving to the Mullaharlin estate. Her religion was of paramount importance to her and she was a Minister of the Eucharist in the Holy Family Church. When in her health she travelled extensively, including to Italy and France where she loved to visit holy places, including Rome and Lourdes, and view churches.

She believed her recovery from cancer was attributable to a visit to Lourdes. In more recent times she suffered another health setback, and resided in Blackrock Abbey Nursing home prior to her passing in Our Lady of Lourdes hospital.

She was predeceased only last August by her brother, Michael who was former town engineer with Dundalk Urban District Council, along with her parents Paddy and Lily.

She will be sadly missed by her nieces and nephews, cousins, especially Margaret Clarke, extended family relatives and friends.

After reposing at Blackrock Abbey Oratory Chapel on the Wednesday, Geraldine was removed the next morning to the Church of The Holy Family, Muirhevnamor.

Personal objects symbolising Geraldine’s life, including a personal picture and glasses were laid before the altar by Margaret Clarke and Zara Smith. The Readings were given by Sharon and Zara Smith

The Offertory gifts were taken up by Anne Baxter and Adwin O’Connor.

The beautiful music was provided by Patsy Breen and Eamon Cooney.

Geraldine’s Month’s Mind Mass is on Saturday, April 27 at 7pm in the Church of the Holy Family.