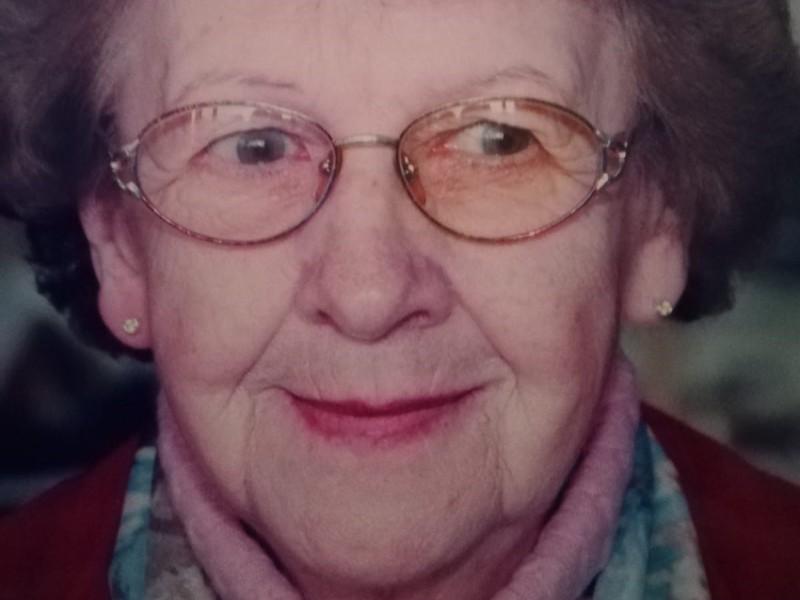 Briege Waller Castletown Road, Dundalk died peacefully in her 92nd year in the care of the staff of Our Lady of Lourdes Hospital, Drogheda on January 31 last.

She enjoyed not only a long but fulfilled life, and while she lost her eyesight and was blind for the last ten years she never complained. She lived with her daughter Collette during that period.

She was the last of her siblings, being one of five children of the late Annie and Arthur Dwyer, and was predeceased by her sisters, May and Nancy as well as brothers, Jim and Michael.

She grew up in Chapel Street and went on to work in the town’s shoe industry in the former Rawson’s factory.

She married Laurence Waller, and took on the role of homemaker and caring for her family.

The couple had five children, Annette, Larry, Joe, Briege and Collette, and when they were reared and married she took on a new role as cook for the Sisters of Mercy in the Louth County Hospital.

When she retired from that position she looked after her grandchildren.

In her spare time she took part in the Irish Countrywomen’s Association (ICA), being a member of the Castletown guild in which she took an active part. She loved travelling and travelled extensively in her younger years, and visited a large number of countries across the world.

She was admitted to Our Lady of Lourdes hospital on January 28 and passed away in her sleep three days later.

She was predeceased by husband, Larry in 1999.

She will be sadly missed by her sorrowing daughters, Annette, Briege and Collette, sons, Larry and Joe, sons-in-law, Kevin and Mick, daughters-in-law, Marie and Kathleen, grandchildren, great-grandchildren, nephews, nieces, relatives and friends.

After reposing at Quinn’s Funeral Home, Bridge Street on the Friday, Briege was removed the next morning to the Mortuary Chapel, Dowdallshill.

Granddaughter, Sharon Fox along with great-granddaughters, Lauren Fox and Alanna O’Neill brought up gifts to the altar that symbolised Briege’s life.

The Prayers of the Faithful were led by grandchildren, Marie Louise Callan, Mary Geary and Shaun Waller.

The Offertory gifts were taken up by Aodhan and Caoimhin O’Neill.

Briege’s family are grateful to Our Lady of Lourdes Hospital, Quinns Funeral Undertakers for their kindness and helping them through a very difficult period and also to Doctor Liam McGrath for all that he did for Briege over the years.

Month’s Mind Mass is on Sunday, March 3 at 12 noon in Saint Nicholas Church.