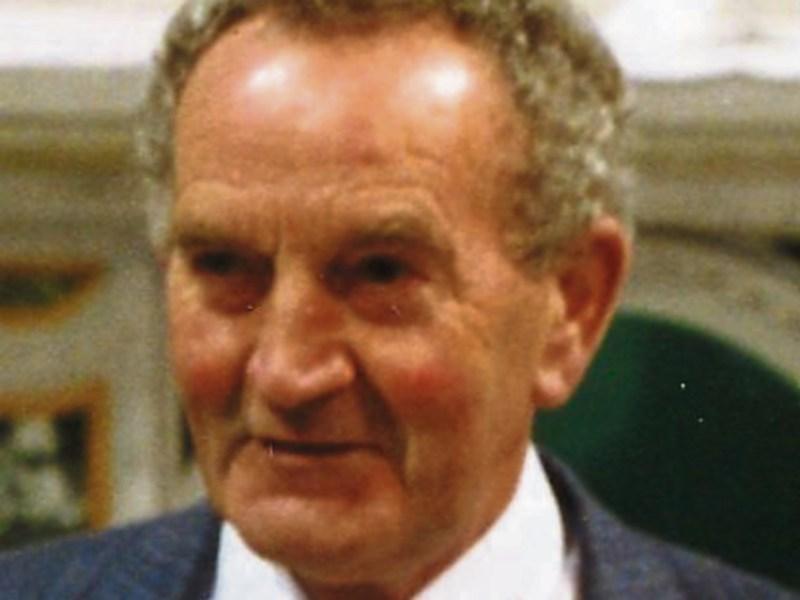 Jim was beloved husband of Mary (nee Lennon) and dear father of Joseph, Dermot and the late Richard. He was the third youngest of a family of ten children of the late Peter and Mary Goss. He attended nearby Kilcurry National School and then the Marist College.

Jim worked in Halliday’s shoe factory for a number of years, and later spent several years as a lorry driver. He also worked for a time in Dowdallshill graveyard.

He was a part-time sheep farmer in his spare time. In retirement he was a school warden on the Avenue Road which he enjoyed.

Jim had a keen interest in sport. He liked going to watch his local club Roche Emmets, and was involved in underage football with Naomh Bríd.

He was predeceased by his son, Richard in 1997, and by his brothers, Kevin, Peter, Michael, Patsy and John, sisters, Mary, Kathleen and Briege and parents, Peter and Mary. Jim is survived by his wife, Mary, sons, Joseph and Dermot, sister, Dora (New Zealand), sister-in-law, brothers-in-law, nieces, nephews, relatives and friends. After reposing at his home, Jim’s remains were taken to Saint Brigid’s Church, Kilcurry where the funeral Mass was celebrated by Father Bernard Hughes who also delivered the eulogy. The readings were given by nieces, Lorraine Leech and Sharon Lennon, and prayers of the faithful led by brother-in-law, Seán Lennon, nephews, Paul Lennon and Augustine Goss and nieces, Kevina Goss and Leoina Lennon.

The offertory gifts were presented by nieces, Aedamar Goss and Hazel Lennon. Beautiful music and singing were provided by Kilcurry choir. Burial took place afterwards in the adjoining cemetery.

The Month’s Mind Mass took place on Sunday, February 17at 11am in Kilcurry Church.