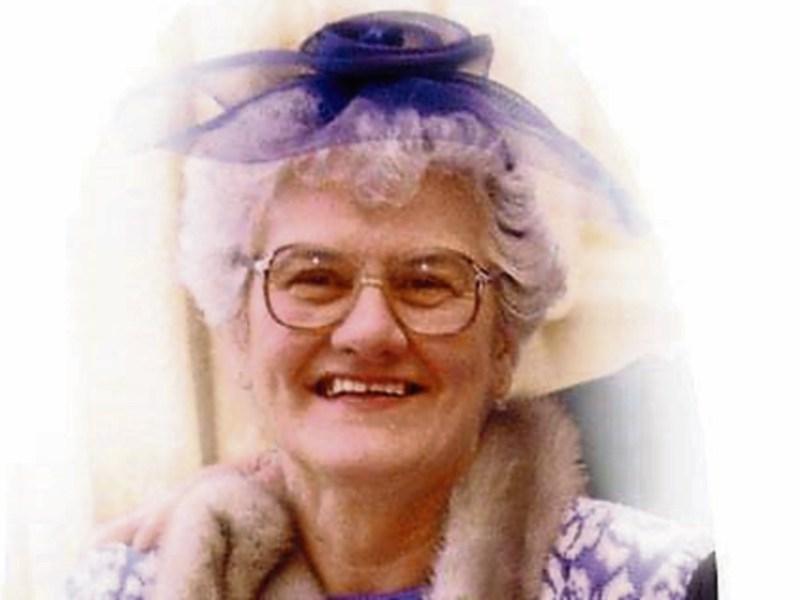 Kay McKeown (nee Culligan) of Doylesfort Grove, Doylesfort Road, who died peacefully on December 21 2018 in her 96th year was the proprietress of “Nanettes” ladies clothes and bridal wear shop on the town’s main street.

She ran the business on Clanbrassil Street for over three decades combining her role as a dedicated wife, mother and homemaker.

She closed the business to take care of husband Hugh who since passed away and was the last survivor of five siblings.

She originally hailed from Kilrush, County Clare. She was one of two daughters of John and Catherine Culligan, who also had three sons, and was brought up on the family farm.

However, fashion rather than farming was her passion and when the opportunity arose she moved to the east coast; initially to Monaghan, and then to Drogheda before settling in Dundalk where she met her future husband Hugh McKeown.

She worked in the landmark J.D. Melville’s ladies Outfitters which was situated at the corner of Clanbrassil Street and Market Square where the Irish Permanent TSB office is presently located.

She served her time there in the clothing trade before deciding to set out on her own and opened “Nanettes” a few doors down the street where she successfully ran Nanettes ladies fashions and bridal shop for over 30 years before retiring.

Away from her shop, she loved to bake, and enjoyed family drives on a Sunday to the like of scenic Ravensdale and Gyles Quay.

She was above all a real family woman, with a deep religious faith and great dedication to Our Lady.

She was a regular Mass goer, and prayer was central to her life at work and at leisure.

She had her fervent prayers answered in the peaceful manner of her passing surrounded by her family on December 21st last at Sunhill Nursing Home, Termonfeckin where she had been under the dedicated care of the staff.

She was predeceased by her siblings Oliver, Michael, Teresa and Senan, along with her parents, John and Catherine.

She reposed at her home at Doylesfort Grove on Saturday and Sunday and was removed on Monday, December 24 to Saint Nicholas’ Church for Requiem Mass.

Gifts symbolising her life were laid before the altar by grandchildren, Tina, Alan and Hugh, while the Offertory gifts were taken up by her sons-in-law, David and Tommy. Two more of her grandchildren, Stephen and Conor gave the Readings, and other grandchildren, Andrew, Mark, Brian, Laura along with Anthony and her niece, Mary led the Prayers of the Faithful.

An after communion reflection written by another grandchild Michelle who is in New Zealand was read on her behalf by Laura.

The singer was Bernadette Watters.