Maura Tuite loved to travel and the performing arts 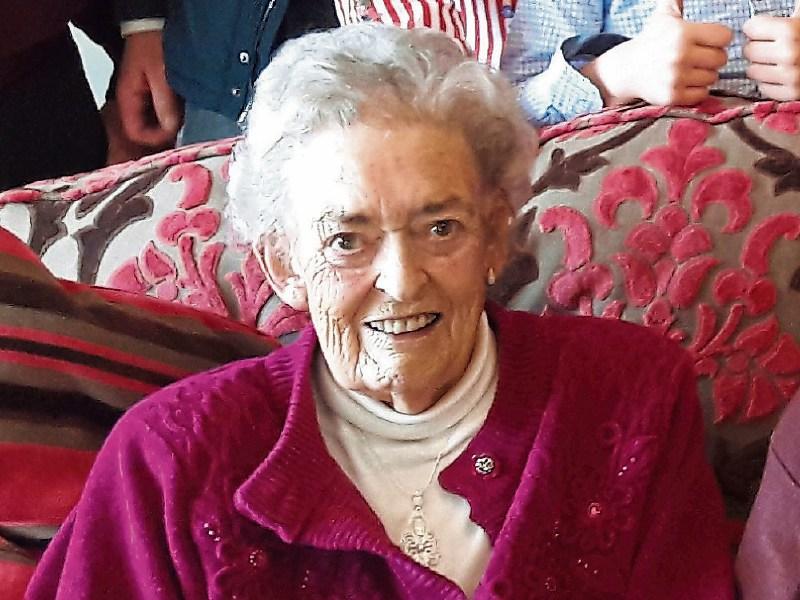 Maura (nee McCann) was born on 30th May 1935 to Brian and Margaret McCann. She grew up in Scotstown, Co Monaghan with her sisters Sally (Tomany), Kitty (Callaghan) and brother Frank.

Having attended Urbleshanny National School she then attended St. Louis Secondary School, Monaghan and was awarded a scholarship to attend Preparatory College in Falcarragh, Co Donegal – a part of Ireland that remained close to her heart throughout her life.

After Maura completed her teacher training in Carysfort College, Blackrock, Co Dublin she took up a position as Assistant Teacher in Dulargy National School where she continued to teach until her retirement.

On 5th August 1959 Maura married local man Vincent Tuite and they set up home together in the Deerpark where they raised a family of five children and enjoyed a long and happy life together.

Maura was a quiet reserved lady who had many varied interests including knitting, needlework, baking, gardening, reading and completing crosswords. She took great pride in dressing her children in clothes she had made herself. Indeed she even made Carrickmacross Lace veils for each of her daughters. Knitting Aran jumpers was also one of her pleasures and all family members had many knitted for them over the years.

She developed and shared many skills through her years of membership of Ravensdale I.C.A.

She also participated in and enjoyed many trips, quizzes, concerts and competitions with the Guild.

Maura loved to travel and enjoyed many holidays including family holidays in Ireland, sightseeing trips to many European locations and several excursions to Australia with her husband Vincent to visit their son Ciarán stopping off in a number of cities in South East Asia along the way.

She had a great love of the performing arts and enjoyed nothing better than attending a musical or play. In recent years she took every opportunity to enjoy the amazing voice of Tara Erraught and the family was very pleased that she could sing at the funeral.

But for Maura her greatest love was her family both immediate and extended and she enjoyed many family get togethers when the house would come alive with chats laughter and songs – a legacy that is sure to continue.

In her later years Maura did not enjoy the best of health, but she bore this with great dignity and resilience, her Monaghan determination and wit always to the fore, Maura confounding medical staff on numerous occasions.

Her faith was strong throughout her life and stayed with Maura through her final hours.

Having reposed at her home in Deerpark , Maura was taken to St Mary’s Church Ravensdale for funeral mass which was concelebrated by Fr. S. Duffy P.P and Fr P. Murphy.

Symbols of Maura’s life were presented by her five children and described by her grandchildren Valentina and Luke.

The Eulogy was delivered by Maura’s son Ciarán. Readings were given by daughter Margo and granddaughter Teresa. Prayers of the Faithful were read by daughter Joan, grandchildren Oisín, Christopher, Ruth, Claire and niece Dympna. Offertory gifts were presented by husband Vincent, sister Sally and brother Frank. Reflection after Communion was read by daughter Anne. The beautiful music was provided by organist Liz McConnon and soloist Tara Erraught.

A Guard of Honour was formed by members of Ravensdale I.C.A. and pupils of Rampark N.S. Burial took place afterwards in Calvary Cemetery, Dulargy.