Tom McEvoy was a kind, genuine and generous man 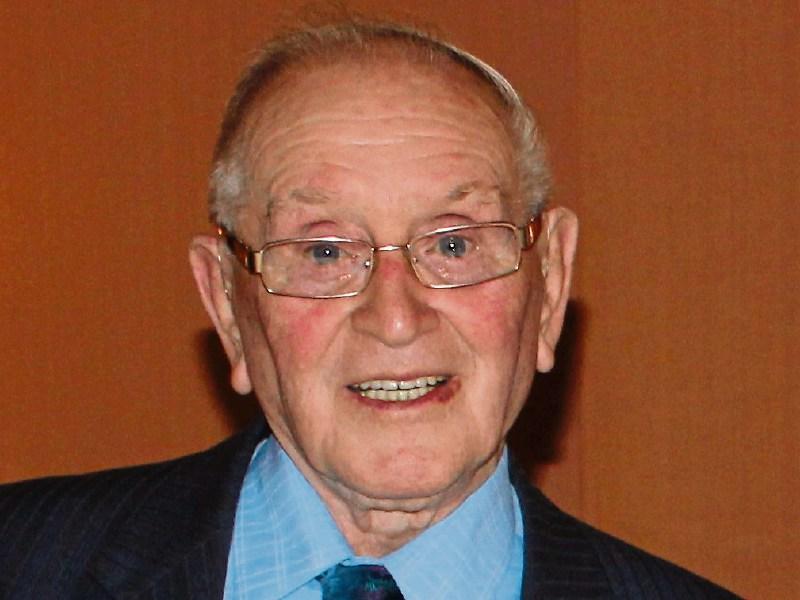 Tom grew up in Railway Terrace, Dundalk; was educated in the CBS and began his working life in the GNR as a junior clerk in 1946.

He later moved to CIE when the company closed down and he became Station Master in Barrack Street. Subsequently, he joined the Auditor's Office where he thrived on the order and discipline of the role which, those who knew him agree, suited him so well.

Tom maintained a lifelong love of the Railway and was an active member of the Dundalk Railway Heritage Society.

His reminiscences of his time working on the Railway can be read in the Society's publication ‘Across The Tracks’.

His other major passion from an early age was football which was a huge part of his life.

Tom was a keen and fervent Dundalk FC supporter and for many years he was the Club’s Treasurer. He was also a big Manchester United fan.

He followed their fortunes closely and travelled many times to Old Trafford to watch their games.

Tom also loved to travel. In the company of his brother, Austin, since deceased, they travelled all over the world together, holidaying in exotic destinations like Hawaii and Tokyo!

Among his other interests was traditional Irish music which he enjoyed with several of his long standing friends.

Together they went on numerous outings and excursions around the country attending musical events and Fleadh Cheoil. Tom also loved to play cards and in recent years developed his love and talent for oil painting.

He lived a long and active life and enjoyed a healthy lifestyle.

He was a keen cyclist and swimmer in his earlier years and up until two years ago was regularly out and about on his bicycle.

Tom took the pledge at the age of ten and was a lifelong and proud Pioneer.

He enjoyed order and routine in his life and was always punctual to the second.

At his core, however, Tom was a man of deep faith and had a particular devotion to Our Lady.

He was a long time member of the Legion of Mary where he made many great and valued friends.

He took great pride in delivering the Messenger and Africa magazines right up until the week before he passed away.

After reposing at his home, his remains were brought the short journey to the Church of the Holy Family Church for Funeral Mass celebrated by Father Frank Corry.

Tom was predeceased by his parents, Thomas and Mary, his brothers Austin and Frank and his sister Kitty.

He is survived by his younger brother, Vincent, his nieces and nephews, relatives and close family friends.

Above all, Tom will be remembered by everyone who knew him as a most kind, generous and genuine man, a dear brother, uncle and friend who will be sadly missed by us all.

His Months Mind Mass will take place on Sunday, October 14, 2018 at 11am in the Church of the Holy Family.