Mena O'Hagan loved to catch up with her friends 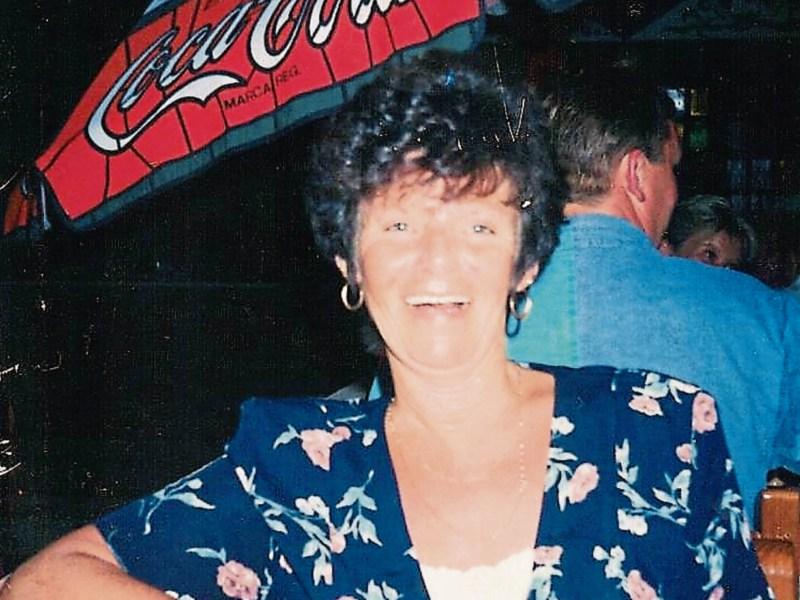 Philomena O Hagan was born on November 21 1947, the youngest girl of eleven children to Owen and Kathleen Browne. She had seven brothers, Owenie, Gerard, Patsy, Joseph, Teddy, Tommy and John and three sisters, Mary, Eileen and Kathleen. She was fondly called “Mena”, a name that stuck with her throughout her life.

Mena was born and reared in 15 Father Murray Park for all of her young life and attended the local Castletown Girls School for her primary education. Her first job was in one of the local shoe manufacturers of the time, Connolly Shoes. She later worked closer to home in PJ Carrolls factory in Church Street.

In 1967 Mena married John O Hagan. They had two children, Emanuel and Sandra. They resided in Beechmount Drive for much of the 70s and 80s. Mena loved living there and had many fond memories of the good and helpful neighbours who surrounded her. Many came to pay their respects during the wake and funeral.

The family in the mid- eighties moved to 99 Cherryvale, Bay Estate on the other side of Dundalk, where she lived for the rest of her life.

Mena had a keen interest in her garden and loved being outside and working in it whenever possible. She was also quite good at DIY and would try her hand at most things herself.

She loved animals and in particular the last two dogs she had “Dodi” and ‘Lady”. She had a very competitive nature and always liked to win, particularly when playing board games. She loved spending time with her grand children and looking after them in her home.

Above all, Mena was very sociable. She loved going on the bus in to town a couple of times a week to do her shopping with her trolley in tow, but more importantly to meet people and friends and to chat and catch up either in the street or in one of the local cafes. This was the highlight of her week and something she always looked forward to.

Mena’s funeral Mass took place on Monday July 23 in Saint Nicholas’ Church. There was a large crowd in attendance. Many of those present were old friends, neighbours and classmates from the north end of Dundalk. The celebrant was Fr Magnus with Father Cormac Mc Namara also in attendance.

Symbols of her life, her trolley, an RTE Guide, a packet of ‘Major’ cigarettes and some family pictures were brought to the altar by grandchildren, Tiernan, Eoghan and Oisin Weldon and Leona Mulvey.

The Prayers of the Faithful were read by Leona Mulvey, Sonia O Hagan and Oisin Weldon. The Readings were delivered by Tiernan and Eoghan Weldon. The Offertory gifts were taken up by Chelsea and Jack Mulvey. At the end of the Mass a reflection was read by her son-in-law Niall Weldon. Music and songs for the Mass were provided by Patsy Breen

She was pre-deceased by her parents Owen and Kathleen Browne and siblings, Patsy (Dundalk), Eileen (London), Owenie (Coventry), Kathleen (Dundalk) and Gerard (Tipperary).

Emanuel and Sandra would like to offer sincere thanks to Quinn’s Funeral Directors for their helpfulness and professionalism at their time of need. They would also like to extend their gratitude to Blackrock Abbey Care Home, Our Lady of Lourdes, Drogheda (Stroke Unit) and the Louth County Hospital Step down Unit for their care, commitment and kindness for Mena over the last twelve months. Mena’s Months Mind will be celebrated on Sunday August 19 at 12 noon in Saint Nicholas’ Church, Dundalk