Sheila Lennon was a caring, loving mum and nana 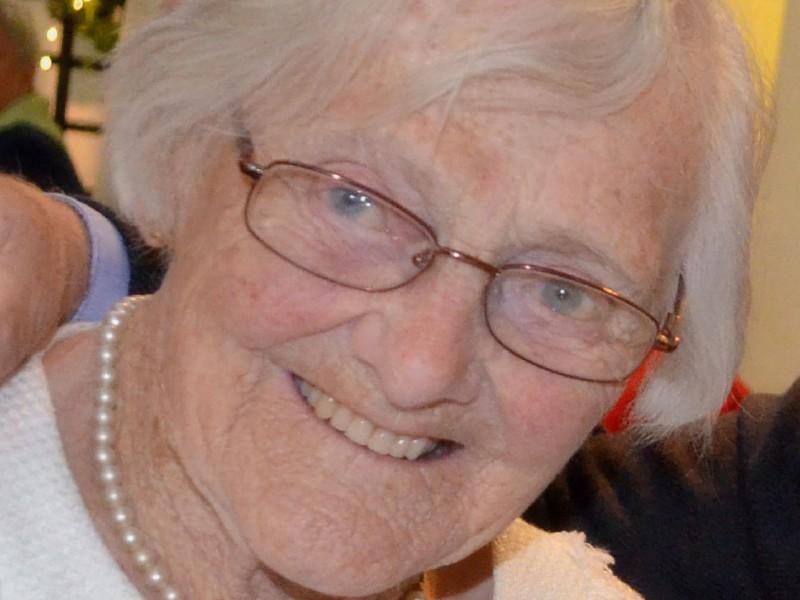 Sheila Lennon, ‘Glenoe’ Point Road, Dundalk, who died June 16, 2018, was a lady who made an impression on anyone who met her. She passed away peacefully in Our Lady of Lourdes Hospital surrounded by her loving family.

Born on November 21 1921 to parents Thomas and Mary Gilsenan, the fifth in a family of eight, she lived all her single life at 5 Hill St. Dundalk and was the last surviving member of her family.

Educated in the Friary School, she also spent some of her teenage years working in McAlester’s pork butchers in Park Street and the Oriel cinema. It was at the Oriel where she met the love of her life, Owen Lennon.

In 1955 the family moved to the UK, settling for a short time in High Wycombe and Cardiff, but eventually moved to Birmingham in 1958, where they spent the next 13 years. During this time Sheila worked in a Teacher Training College and between 1961 and 1965 she and Owen purchased two houses, converting them into flats.

A woman of quiet determination, she did all the painting, decorating and managing of the houses.

While they enjoyed their time in Birmingham, the lure of home was never far from their thoughts and in 1970 Sheila, Owen and son Owen moved back to Ireland and their home in Dundalk, where they opened a grocery shop on the corner of Barrack Street and Saint Alphonsus Road.

They quickly established themselves in their new venture and over the years made some great friends among their customers; indeed, the shop became a meeting place for friends and neighbours alike with many a yarn being told there.

Following the sudden death of her husband Owen in 1983, Sheila found it difficult to come to terms with his passing and made the decision to close the shop.

The love for her family and grandchildren helped her deal with the loss of her husband and being a devout Catholic she also made daily visits to the Redemptorist Church.

She also spent many days helping her son Owen in his Nursery in Dromiskin, displaying a great work ethic and a flair for horticulture. Over the subsequent years Sheila’s gardening skills came to the fore, her front garden receiving the compliments of neighbours and passersby alike, something that gave her great pleasure.

Having only learned to drive at the age of 62, it gave her independence over the years and she continued driving up to the ripe old age of 95.

During these years, she enjoyed many days out with her sisters, visiting many local attractions and stopping for a cup of tea along the way.

Her gentle and thoughtful ways were a big influence on her four grandchildren, Barry, Sara, Aoife and Niall. They will cherish the love and advice given to them over the years by this amazing lady.

Sheila welcomed five great-grandchildren into the world, Chloe, Lauren, Ryan, Jamie and Daniel. But because they were older, the girls enjoyed many good times with lovely memories that will stay with them through their lives, including the many board games she taught them to play.

She loved the regular visits from her grandchildren, great-grandchildren, nieces, nephews and friends and all of them were rewarded with a cup of tea or coffee and a Mr. Kipling cake, something that became synonymous with Sheila.

Her generosity and charitable donations over the years demonstrated how she always putothers first.

Sheila will be sadly missed by her son, Owen, daughter- in- law, Moira, grandchildren, great-

After reposing at her home, her remains were removed to Saint Joseph’s Redemptorist Church, Dundalk on Monday June 18 for funeral mass celebrated by Father Brendan Callanan and Moira’s cousin, Father Lorcan O’Reilly from Dublin. Gifts symbolising Sheila’s life were brought to the altar by daughter- in-law, Moira, granddaughter, Sara and son Owen.

Before the service began, a poem called ‘Smile’, close to Sheila’s heart, was read by her great- granddaughter, Lauren.

Prayers of the Faithful were read by granddaughter, Sara and nephews, Patsy Rogers and Pat Lennon.

A special word of thanks to the doctors and nursing staff of the Lourdes Hospital, Drogheda, who cared for Sheila in her final days.

They were nothing short of magnificent.