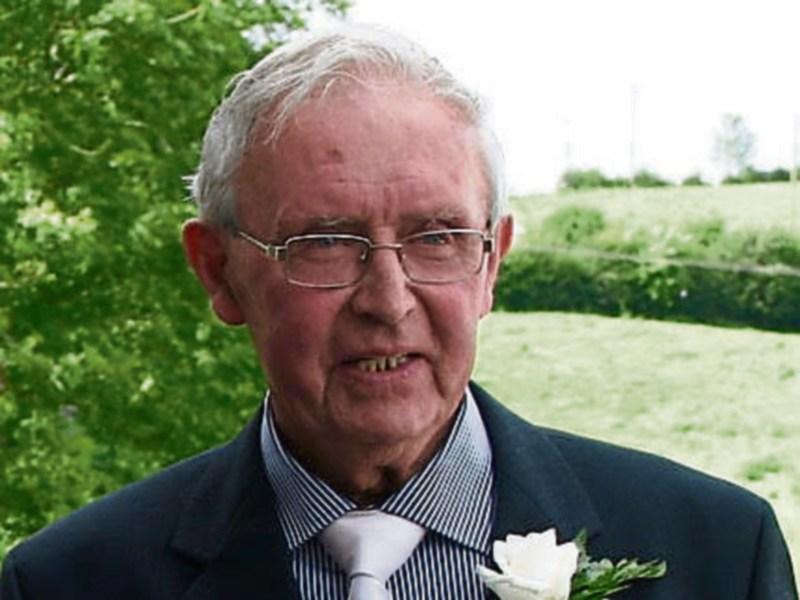 Saint Brigid be with me until the road’s end,

And help me walk through that gate as God’s friend

The family of the late Willie Treacy, Shortstone, Hackballscross, Dundalk, would like to sincerely thank everyone who helped to make his funeral so memorable; and share a few words about the wonderful celebration of his requiem Mass in the Church of the Most Holy Rosary, Bridge- a-Crinn, on 19th Sunday, 2017, the feast day of Saint Joseph.

It was fitting that Willie, who passed away on March 16, 2017, should relinquish this mortal coil at such a vibrant time of year.

He loved the spring when every tree and flower is budding – new life coming to the land.

Torrential rain had ushered in the morning but as the cortege neared the church, the sun broke through changing the aspect into a shimmering brilliant scene.

A guard of honour, provided by Roche Emmets, took up its position to escort the former player and captain on his last journey.

The sweet strains of ‘Ashoken Farewell’ echoed through the church thronged with family friends and neighbours.

With the exception of baby Charlotte Treacy, then only four days old, all of the grandchildren took part in the ceremony.

Readers of the Word were Gerard Treacy, Adele Dawe and Denis Treacy, while the Offertory commentary was by William Treacy.

Violinists, Pat Treacy, Maria Dawe, Aisling and Richie Dunne, carried the senses to other worlds, tears stinging the eyes, so moving and heavenly was their music.

Music for the Offertory was ‘My Lagan Love’, and for Holy Communion ‘Somewhere Over the Rainbow’ and ‘Bring Him Home’.

The beautiful playing of these familiar pieces filled the congregation with deepest sympathy and emotion.

Paddy Craven, Willie’s life-long friend, introduced the Communion reflection with snippets of memories about Willie, describing how he could put on the “hat of a poet”, the “hat of a writer”, the “hat of an historian”, before giving a really sensitive rendition of Willie’s poem ‘An Awakening’, in recognition of his devotion to Saint Brigid.

The final music ‘Danny Boy’ by the violinists again had tears springing to the eyes.

‘The Minstrel Boy’ for the recession, kept all in step as the congregation proceeded from the Church following the coffin. Three times the pallbearers changed hands.

The sun shone brightly and Father Michael spoke the words of blessing and farewell as the coffin was gently lowered.