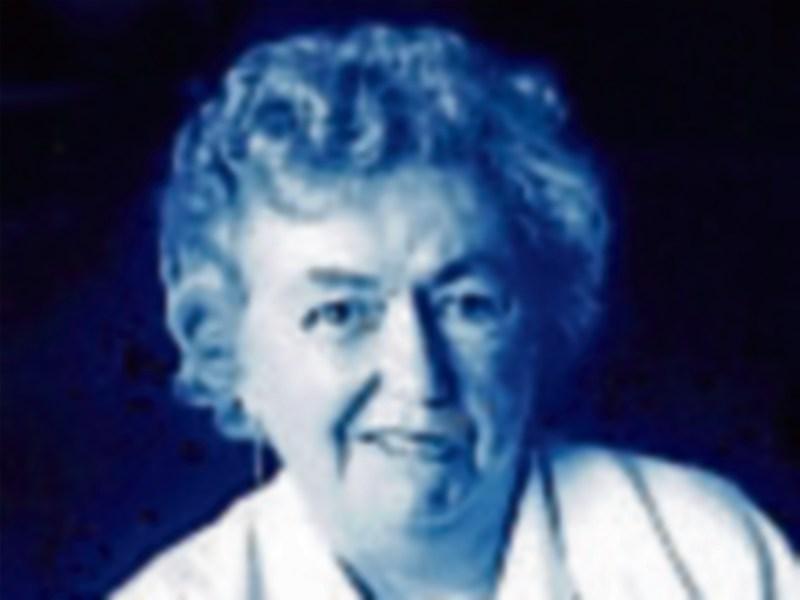 Pauline O’Hanlon of Lennon Melia Terrace who died on September 4 last was a lady who devoted her life to her family and was sustained by her steadfast faith.

Formerly Miss Milne she hailed from Trinity Street in Drogheda, but as a young bride of 18 moved to Dundalk and spent the remainder of her life in her husband, Thomas’s native town, although she always kept her ties with her family and home town. She worked in Donaghy’s shoe factory early in her life.

The couple met at a dance on Boyneside and celebrated 68 years of marriage on August 16 last.

They set up house at Lisdoo and remained in the area moving into Lennon Melia Terrace when it was built, and raised a large family of nine. Sadly youngest son, Shane passed away in 2002

Pauline was very quiet and unassuming with a lovely personality who ideally filled the role of loving and supportive wife and mother as well as housewife, while Thomas was the bread earner, working as a painter.

She contributed greatly to the household with her gifted hands that enabled her to make clothes for her children and to whom she gave great support such as in their involvement in sport, a prime example being athletics in taking them along to race meetings. She placed great store in her faith, with staunch devotion to both Saint Brigid and Gerard, attending the annual novenas in their honour in Saint Nicholas Church and Saint Joseph’s Redemptorist Church and was a regular visitor to the shrine of Saint Brigid in Faughart .

Her grandchildren like her children were a focal part of her life. She had a great interest in what they were doing and took pride in their achievements.

Her main hobby was making jigsaws, at which she was very adept, and would not attempt any one with less than a 1000 pieces .She also liked reading, and was an avid snooker fan with Willie Thorne her favourite player.

She stayed in regular touch with her family and school friends and Drogheda, going back to the town to meet up with them. She also annually for between 40 and 50 years paid a visit to her sister Juliana in Chorley in Lancashire, staying there for three or four weeks.

Outside of her home she enjoyed attending musicals and talent shows with her daughter-in-law Mary and Mary’s mother.

The three also enjoyed a regular weekly outing for afternoon tea in the Four Seasons Hotel Carlingford. Another weekly hobby she very much liked was attending bingo with her daughters.

One of eight children, comprising five brothers and two sisters, her death is the fourth bereavement in the family in recent years, with brothers Ronnie and Raymond passing away last year and 2015 respectively Another brother Dermot died in 2012. She was also predeceased by her parents Eoin and Juliana.

She passed away peacefully surrounded by her family in Blackrock Abbey Nursing Home where she spent over three years under the kind and gentle care of the staff. Her family could not thank them enough and will be forever grateful for the care and attention Pauline received

Pauline reposed at her home from Tuesday until the following Thursday morning when she was taken to Saint Nicholas' Church for Funeral Mass. Father Magnus Ogbonna CC was the celebrant

Four of her grandchildren Pauline Bradley, Regina Lavery, Fergal O’Hanlon and Aidan McElevey presented a number of gifts at the altar that symbolised her life. These included a knitted cardigan, her novena book, a photograph of her late son, Shane and a jigsaw.

The Offertory gifts were taken up by daughters, Fidelma Gorham and Deirdre Bradley.

Son Aidan gave a eulogy, and a prayer was recited at the graveside by granddaughter, Susan O’Gorman.

The beautiful music was provided by daughter-in-law Mary O’Hanlon and granddaughter Sabrina McArdle.

Month’s Mind Mass is on Sunday, October 8 at 12 noon in Saint Nicholas Church.